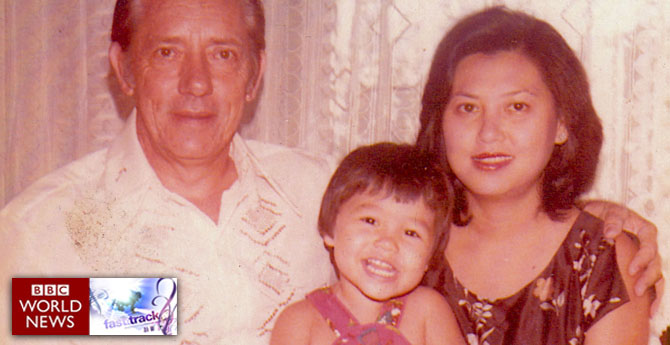 “Where are you from?”

It’s a fairly innocuous question, but one that always riled me, especially when I was growing up, because it meant that I was different. Or more to the point, I looked different.

When I was at university, I’d often tell people I was from Hawaii. This story is somewhat believable and seemed far more exotic than the truth at the time. If I took an instant dislike to someone, I’d tell them I was from Sweden, and this would usually have the desired effect and kill the conversation immediately.

I’ve had complete strangers shout greetings at me in Japanese on the street, uninvited people speak to me in Mandarin at the bank or supermarket, people hard of hearing in nightclubs think I come from the United States and a British Airways steward once mistook me for a Latino.

But the truth is, I was born in Singapore. My mother is Singaporean Chinese, my father hailed from New Zealand and my grandfather was born in Scotland.

We moved to Australia when I was five years old to the tourist metropolis of the Gold Coast, in the state of Queensland. Now, if you’ve never been, think of a mini Miami Beach or Fort Lauderdale in Florida. It’s a city littered with glittering high-rise buildings and golden sandy beaches populated with bronzed surfers and bikini-clad sunbathers, while in the suburbs, palm trees line the streets and most residential homes are situated on a canal and every second household owns a boat or a jet ski.

Don’t get me wrong, I have some very fond memories of the Gold Coast, including some wonderful friends and family still living there, but it’s never been known to be a cosmopolitan destination and certainly not in the early 1980s. It is after all, the state that spawned the likes of the nationalist One Nation party and its leader Pauline Hansen.

Before we left Singapore, I could speak four languages – English, Cantonese, Malay and Mandarin. But I can still remember the children at the holiday apartments where we first stayed when we arrived in Australia saying that I “spoke funny”. At the tender age of five, you just want to fit in.

Shortly after we arrived on the Gold Coast I was trailing behind my mother as she did the grocer shopping at a local supermarket. Being a typical five year old, I was grabbing everything from the shelves and trying to put it in my mum’s shopping basket. My mother scolded me in Cantonese and I apparently turned around with a concerned look on my face and said, “Shhhh, people will hear you and then they will know that we are not from here.”

Mum burst out laughing in the face of her almond-eyed little girl.

At school I was called the usual gambit of names associated with having ‘slanty eyes’, despite my best efforts to cultivate the broadest Australian accent possible.

After university I moved to the UK, thanks to the ancestry visa afforded by my Scottish heritage. And while all my Australian friends had to return home after their obligatory two-year working visa was up, I was able to stay on, gain residency and eventually get a British passport.

I was working for the BBC at the time and it took me a long time to get any reporting work, partly due to the stiff competition, but largely because of my accent. When I look back now, I think perhaps I just had a pedantic boss who was trying to make life difficult for me, because there are so many varying accents now on BBC World TV – ranging from Australian and Kiwi presenters to thick Scottish tones reporting from the many corners of the globe.

But I diligently went about trying to change my accent yet again, this time with the help of a trained voice coach. I turned up for my first lesson and promptly announced that I needed to lose my Australian accent and gain a British one instead. Ms M stifled a giggle and said, “Oh, you won’t want to do that, it’ll mean you’ll have to lose all your friends and hang around with a group of posh English people – just let me help you with some of your vowels.”

Not quite on the scale of Eliza Doolittle, but after a couple of months of intensive training, my vowels were suitable enough for broadcast and I enjoyed many years as a
reporter for BBC World’s ‘Fast Track’ travel program.

But after 11 wonderful years in London, finally it was a long distance relationship and a marriage proposal that lead me back to Singapore.

Welcome home – or so you would think.

The Singaporean government doesn’t acknowledge dual nationality and I now hold three passports – British, Australian and New Zealand – so I was faced with the difficult decision of trading three nationalities for one. And as a result, I’m now treated like a foreigner in the country that I was born in. Maybe it serves me right for changing countries and trading accents.

But as we are about to welcome a child of our own into this world, I can’t help but wonder if my son or daughter will inherit my Asian looks or my husband’s English features. Will they too suffer the racist taunts at school? Or has the world become one big Benetton advertisement? I hope our child will not have to go through the same sort of identity crisis or struggle as much to fit in.

And now that I’m back in Singapore, I get that same question more than ever, “where are you from?” But it doesn’t bother me so much anymore. In fact, I’ve finally learnt to embrace my multicultural heritage and looks and I quite enjoy telling the brief nutshell version of my family history to people I’ve just met. But for me, it’s been a long and bumpy journey. 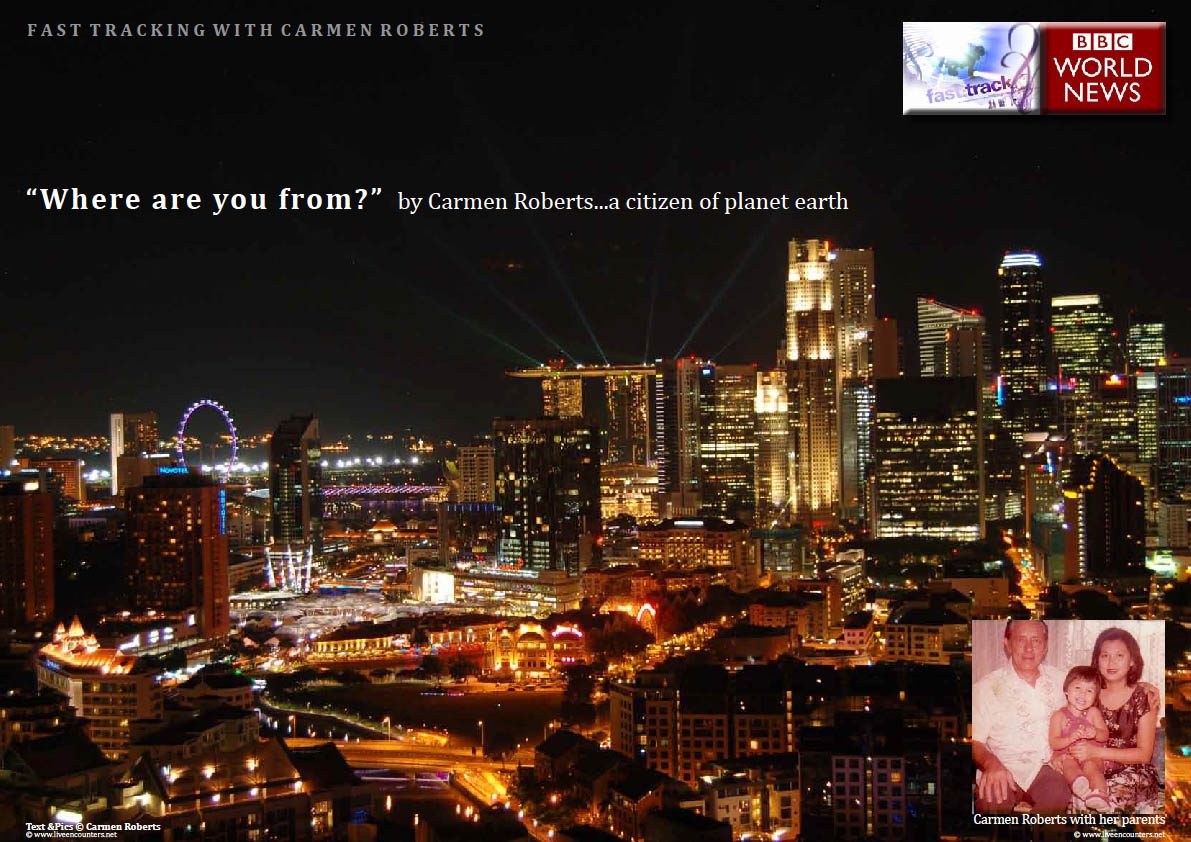 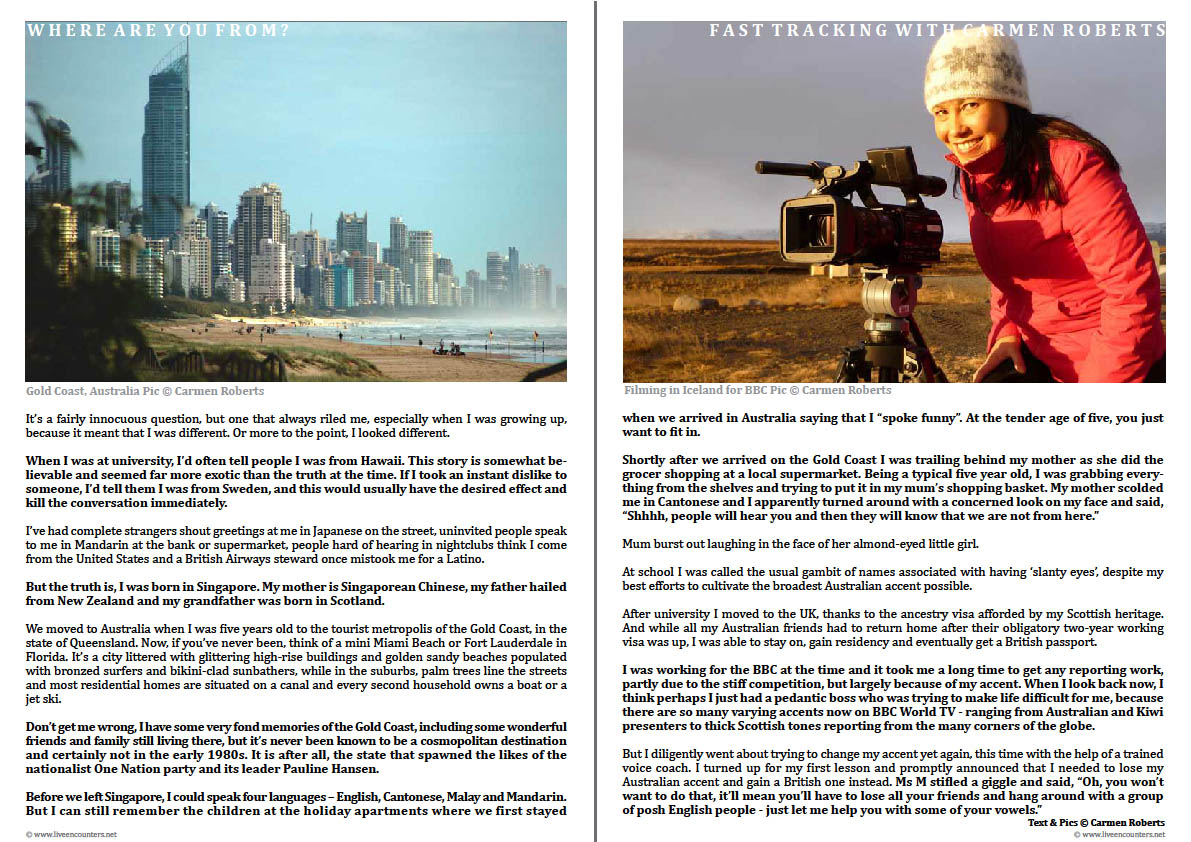 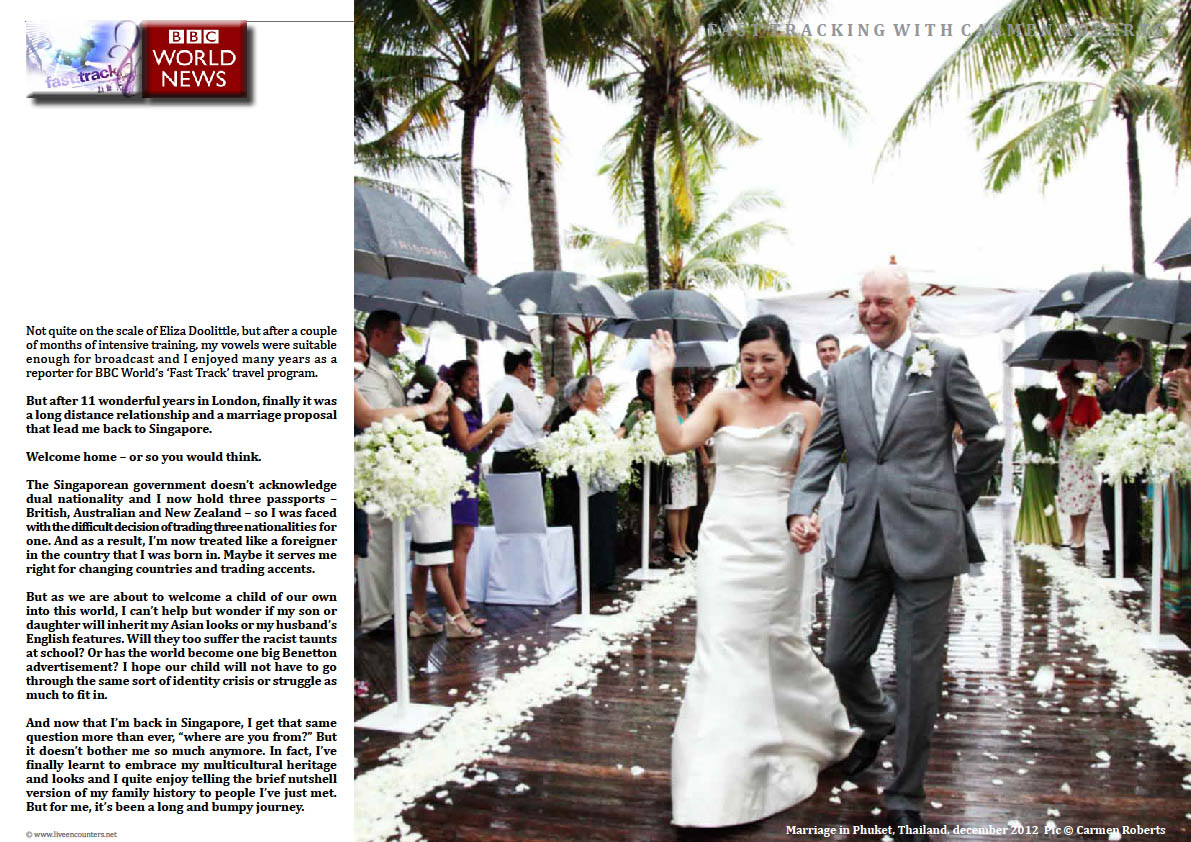