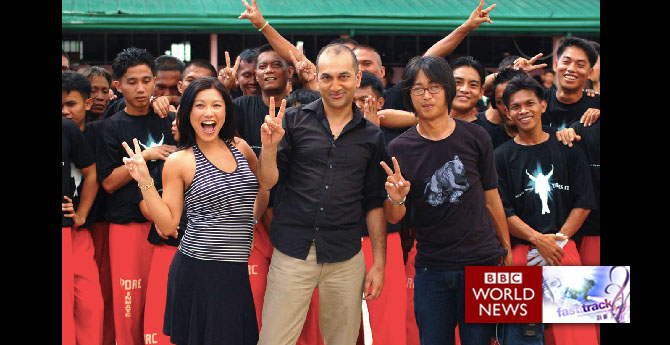 Dancing with criminals in jail!

The life of a travel journalists isn’t always as glamorous as you might think, especially in these times of airline strikes, bankruptcies and volcanic clouds. But the last place you’d expect a travel and lifestyle reporter to end up is in prison.

I can safely say, our report from the Cebu Provicicial Detention and Rehabilitation Centre in the Philippines was one of the most popular stories on the BBC website during the week that it aired, it garnered a huge audience response and most importantly, it was great fun to film too.

Yes, I’m talking about those orange jumpsuited, dancing inmates made famous on YouTube with their version of Michael Jackson’s “Thriller” back in 2007.

But what’s this got to do with travel and tourism you might ask?

Well, very few people know that this maximum security prison opens its doors to visitors on certain Saturdays every month to watch live performances of the dance routines. You can even have you picture taken with the prisoners and buy souvenir prison t-shirts.

But as you might have guessed, the road to getting permission and access wasn’t smooth sailing. It didn’t help that we arrived right in the middle of a political (and sibling) bun fight between the head of the prison Byron Garcia and his sister Gwendolyn Garcia, the Governor of Cebu.

Just days before our arrival in Cebu, the dancing program had been put on hold by the Governor amid concerns over accounting practices for generous donations to CPDRC program.

Nevertheless, after pleading emails and desperate phone calls to the governor’s office, permission was granted at the eleventh hour. So, despite the suspension, we were allowed to film a live dance performance.

I should hasten to mention that the prison has been criticised by human rights campaigners who claim that enforced dance routines are exploitative and not proper rehabilitation. Some former prisoners have even alleged violence was used against those who refused to join in.

With this in mind, the air was tense when we arrived at the prison. As we emerged from the vehicle to get some shots from the outside gates, inmates from the jail next door shouted and leered at us through barred windows. But I must admit, all these worries faded away once we entered the prison.

It was also helped by the fact that we were running late. No sooner had we been ushered onto the viewing platform, a booming voice announced our names over a microphone, introducing our team individually to the inmates who had been waiting for us in the courtyard under the hot Filipino sun.

And then the distinct and catchy tune “Do The Hustle” began to blare from the PA system in surround sound and the courtyard beneath us began to pulse with a thousand rhythmic bodies all in sync. It was a spectacle.

A troupe of identically clad murderers, rapists, robbers and fraudsters, all dancing to the same tune. We were then treated to that viral hit, “Thriller” as well as the aptly titled “The Don’t Really Care About Us”, which was featured in the closing credits of the recent Michael Jackson documentary, “This Is It”. It was all over in a matter of minutes.

I cannot tell you how many times I’ve watched these performances on YouTube, but to see it live is a whole other experience. I was truly blown away by the discipline of the perfectly timed, funky choreography – regimented, but in the best of ways.

I spent a good deal of the performance looking through the viewfinder of a SLR camera, as well as, a small hand held flip camera.

I even ventured down onto the dance ‘stage’ – otherwise known as the prison courtyard – to film some. And even though we were inside a maximum security prison, and I was close enough to touch some of the prisoners at times, I never once felt threatened or at risk.

The prisoners genuinely enjoyed the attention. Afterwards they eagerly posed for our personal instamatic cameras, while others continued with the dance moves. Certainly, of the inmates we saw, the dancing had given them a sense of purpose and pride, as well a degree of fame and notoriety on the internet.

We interviewed two of the star dancers after the routine.

One confessed to a crime of passion – killing his gay American lover.

While the other told us, quite matter of fact, that he was behind bars for multiple murder. It was hard to believe. But log onto YouTube, or indeed Fast Track, and see for yourself. 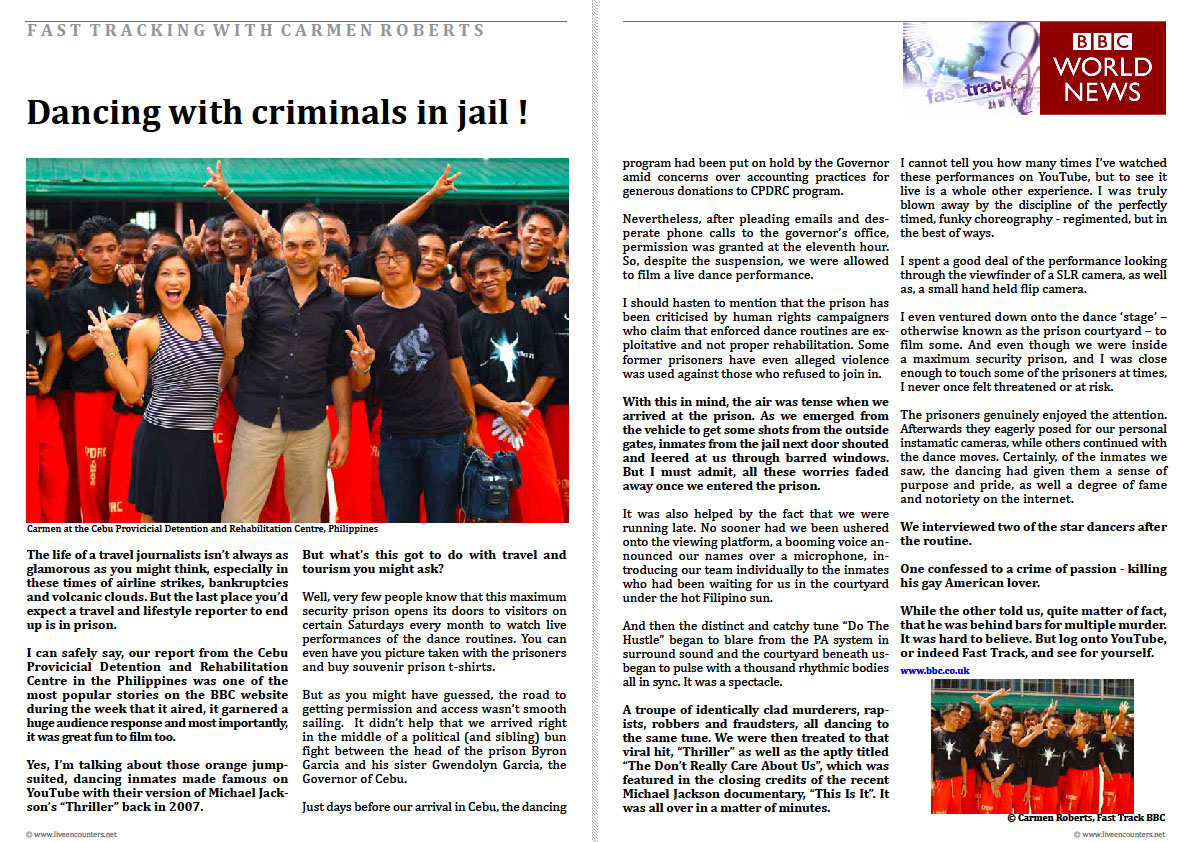