Off the beaten track in Japan…

Japan has never ceased to amaze and overwhelm me ever since I visited it for the first time because, for me, it is so different from other countries – the culture, customs and the people, deep rooted in their genteel mannerisms and traditions. From the white-gloved, bowing bus conductors, the Bullet trains that are punctual down to the minute to ordering one’s dinner from a vending machine!

So, whether you envisage the futuristic Blade Runner skyline of Tokyo, high tech gadgets, robots or the whimsical kimono-wearing, painted-faced geishas of Kyoto, this is a country that has the potential to keep even the most avid traveller enthralled, every time.

On my most recent visit at the end of last year, I was tasked with seeing Tokyo through the eyes of the locals. So it was time to throw away the guidebook and leave the tourist trail. One of our challenges was to find a shop that only locals know about. Talk about a tall order, especially in this age of online guides and social media sharing!

Our search led us to the western suburbs of Kichijoji, an area that was once reserved as an artists’ colony, but now it’s jam packed with funky, off-beat fashion boutiques, as well as, large department stores. The streets are littered with bars and music studios and this is the place where local bands perform when they are just starting out. But Kichijoji is perhaps most famous for its narrow, dimly-lit alleys, known as ‘Harmonica Yokocho’, filled with shops, bars and eateries. Apparently it used to be an underground flea market dating back to the 1940s.

After accosting numerous stunned Tokyoites on the street with my very limited Japanese, we finally got wind of a sweet shop in the area that specializes in Youkan, a thick jellied dessert made of red bean paste, agar and sugar. It’s popular during the summer months and can keep for long time, which makes it an ideal gift item.

The sweet shop in question is called Ozasa, and it makes about 150 blocks of Youkan a day. If you take a peek inside the shop you’ll see why – their kitchen is tiny. Personally, I think the limited number of sweets makes this establishment all the more exclusive and the fact that you have to queue for hours, makes the rewards even sweeter.

The shop itself is a tiny hole in the wall outfit, blink and you’d miss it as you stroll down Harmonica Yokocho – that is, if you go in the afternoon. But if you arrive early morning, as we did, there’ll be a queue of people lining the nearby walls in eager anticipation of the woosh of that sweet shop roller door.

We arrived at the shop front shortly after seven, just as the sun was rising over Tokyo. But the line was already at least 100 strong, with well prepared sweet shop enthusiasts equipped with thermos flasks and foldable chairs. The elderly gentleman in front of me said that he’d been queuing since half past six.

At around 8:30am a weary staff member finally emerged and began to distribute tickets down the line for the Y580-a-piece jellies (there’s a limit of up to five per person). If you are lucky enough to snare a ticket, then protocol dictates that you have to return at 10am when the shop opens to collect your box of goodies.

A hundred eager sets of eyes watched the woman staff member diligently dole out the tickets, slowly making her way down the line. It was almost nine o’clock, she was just a few people away and my excitement was building. But suddenly, she turned and bowed to a woman less than a meter ahead in the line, the bow was returned and after much muttering in Japanese and even more gratuitous bowing from my fellow queue members, I realized we’d been dealt the crushing blow and the Youkan limit had been reached. I’d wasted the best part of a morning standing outside a closed shop, only to be turned away at the last minute.

If this had been a scene in England or in most other parts of the world, there would have been a riot, or at least a lot of cursing. Instead I was engulfed by a bowing wave of politeness.

Fortunately, our trusty Japanese fixer had arranged a taste test for us, in this eventuality. So we returned at 10am to try the much-awaited and coveted candy. I was presented with a block of dark purple, almost solid jelly. With careful ceremony, I sliced a bite-sized portion with a tiny wooden knife, and gobbled it down with gusto.

Now, I must admit I’m a sweet tooth at heart, and I was immensely looking forward to this much talked about tasty treat. But as much as I tried, my taste buds weren’t enjoying the floury sweetness and congealed jelly sensation. I desperately wanted to be polite, especially in front of my new Japanese friends, but the involuntary eye squinting and turned down corners of my mouth said it all. I guess you have to be Japanese to truly appreciate this traditional delicacy, much like what vegemite is to Australians and black pudding is to the English.

But I can safely say, that this sweet shop experience can’t be found in your regular guidebook and there wasn’t one tourists waiting in line for the famous Youkan! 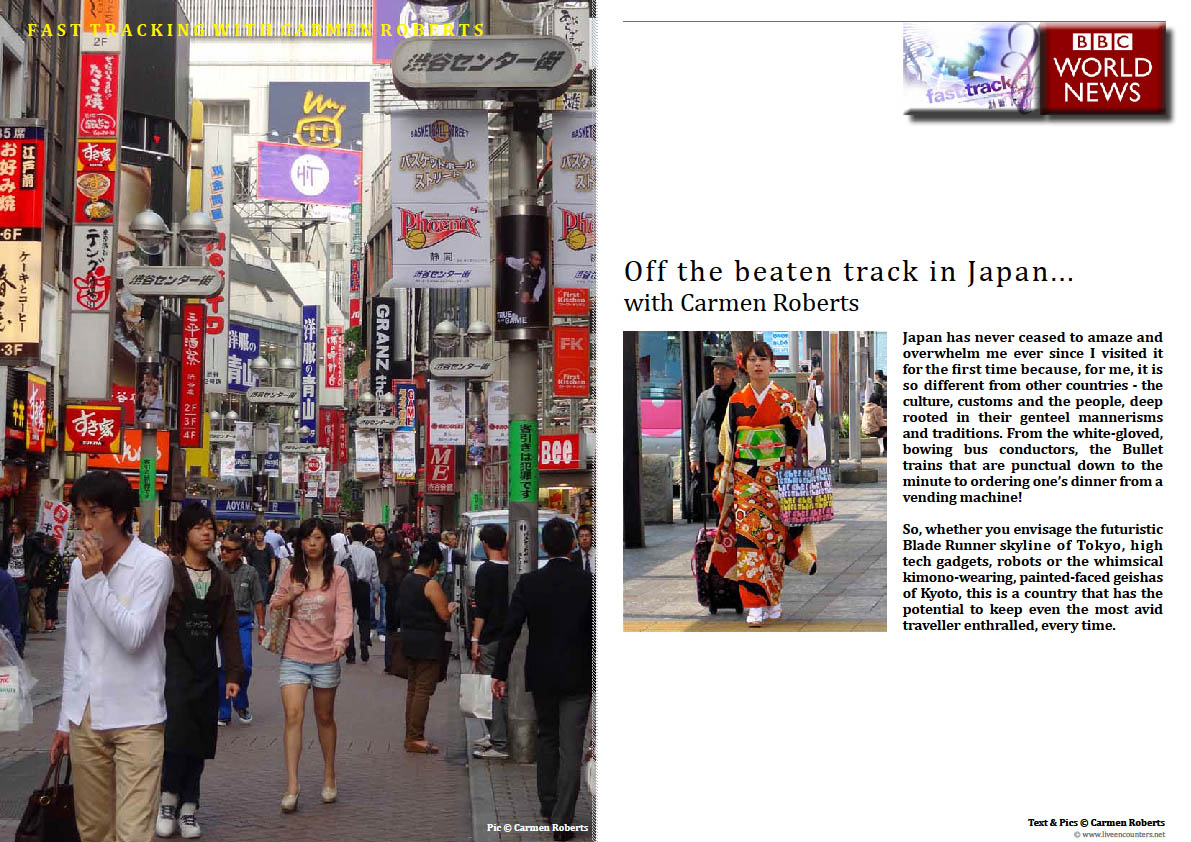 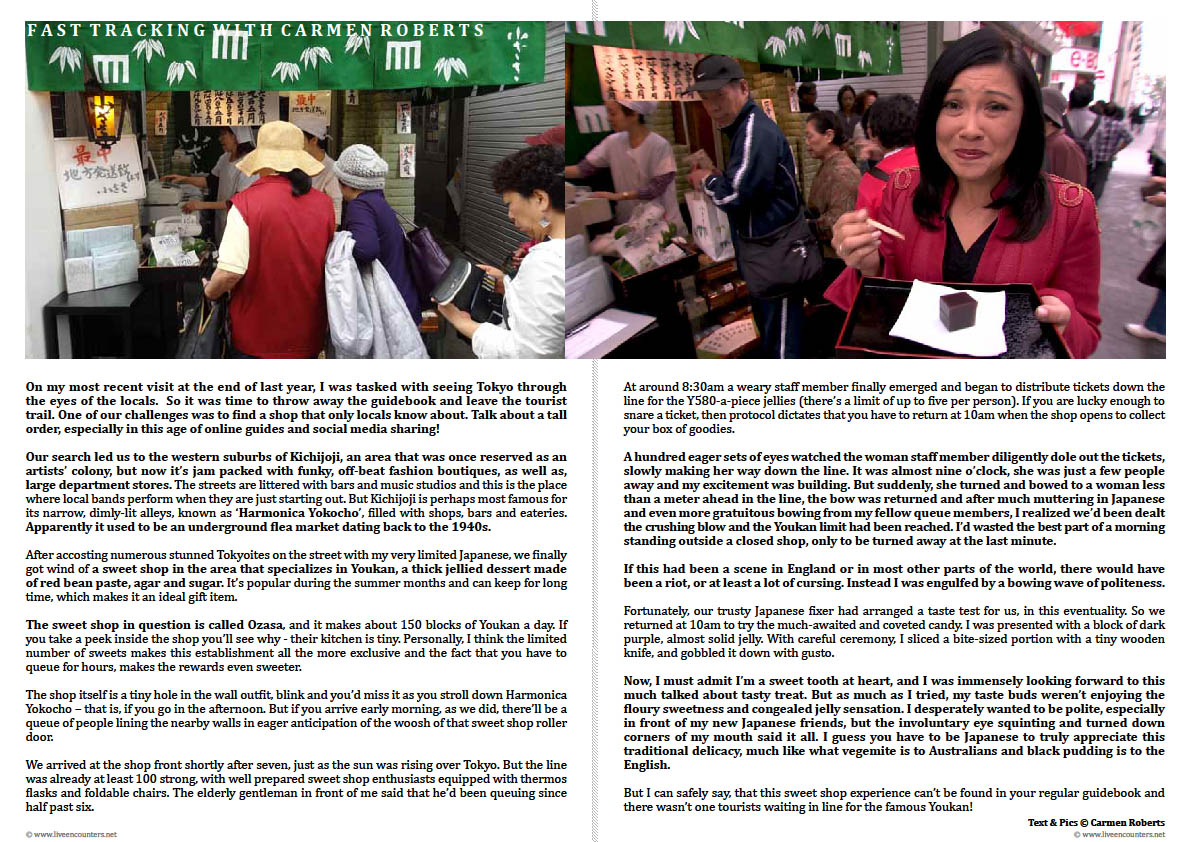