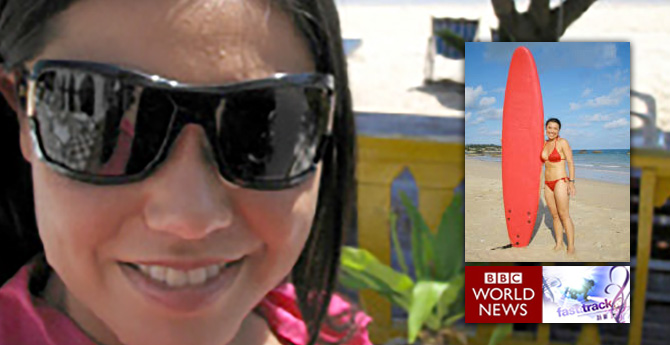 Most people think I have one of the best jobs in the world (until they see my pay cheque!) Actually, I wish I had a dollar for every time someone asked me “so, you work on a travel program, do you get to travel?” Yes! And I’m one of those lucky few people who get to truly say “I love my job”. I don’t say that to be smug or presumptuous, but in my opinion there is certainly no better “office” than the refreshingly unpredictable world around us. Sure there are the long flights, layovers and delays in uncomfortable airport lounges, the constant threat of DVT but the places we go, the people we meet and the stories that come thick and fast – from camping out in the Australian outback, whale watching in Canada to African film festivals and even the odd beach destination.

So what’s it like being a woman in this business? Funny, a lot of people think I’m a Robert anyway. Invariably it’s in Asia. I’ve lost count the number of times I’ve walked out into a brightly lit circus of an arrivals hall filled with families reunited, business travellers and back packers with no fixed agenda, to find my host brandishing a name board that has ROBERT CARMEN. Surprised looks usually follow, which results in the pantomime of me pulling out my passport proving that I’m in fact Carmen Roberts, not Robert Carmen.

Still, sometimes being the unexpected guest has its plus points. Some people assume that because I’m a fashionable, young woman I might not be very knowledgeable. Well this can work to your advantage. I always say it’s best to convey what you don’t know, than what you do know. So it’s often in these cases that you get the best answers or soundbites, when someone assumes you aren’t so well informed. It’s an old reporter’s trick, but it certainly works.

Sometimes it’s when things don’t go quite to plan that we get the best stories and the best memories. A few years ago I was filming in the whale watching town of Tofino on Vancouver Island in Canada and had a rather rude awakening on my first night. I had flown from London to Vancouver, via Toronto and then had a long layover at Vancouver airport to catch a tiny shuttle over to Vancouver Island. Needless to say I was totally exhausted after travelling for the better part of 15 hours.

My cameraman and I checked into our hotel and I had a quick peep out the balcony door onto the most amazing view overlooking a lake and woodlands. This was seriously the most sumptuous ‘Best Western’ I’d ever stayed at.

We dropped our bags, headed out to film a few shots on the beach and then get some dinner, after which, I pretty much fell into bed. Fortunately, I put the chain on my door, not something I usually do (don’t tell my mum) I was woken up a few hours later to voices outside and then someone trying to open the door. The chain prevented it from fully opening and through my sleepy haze I was able to mumble “what are you doing?” There was more chatter and then silence. So I naturally assumed they’d gone away. But a few minutes later the sliding door of my balcony burst open and there was a groom carrying his bride over the threshold! It appears I had mistakenly checked into the honeymoon suite.

In fact, I seem to run into hiccups over sleeping arrangements. A few months ago I was filming a story about star gazing in Australia and the New South Wales tourist board had suggested I go camping in the Blue Mountains and experience sleeping under the stars. This was all part of events to mark the international year of astronomy this year. I was told there wasn’t space for a cameraman at the ‘posh camp’ – so I agreed to film the experience myself.

Our meeting point was a vineyard, about an hour outside of Sydney. My guide was a rugged outdoorsy chap, no more than 40 years old. We drove for almost two hours before we reached the camp site and as we neared I mentioned the need to send a few emails after dinner – it was one of those moments where you wished you could swallow the words back in as they are coming out of your mouth. The look of disbelief on my guide’s face said it all.

So I rather sheepishly sank down in my seat and waited for the camp to appear into view. Again, another classic faux pas, thankfully not spoken out aloud this time – but I honestly expected to be greeted by a bevy of women preparing my dinner and fluffing up my quilted swag. In fact, we were met by an open tent, some chairs and tables and not much else.

It then dawned on me that I was to spend a night with a man I’d just met, in a secluded spot in the Blue Mountains with no mobile phone reception or internet. Surely Tourism New South Wales weren’t going to send me into the bush alone with an axe murderer? This, of course, was the crazy rambling thought process of a paranoid woman who’s read far too many Patricia Cornwall novels.

Fears aside, the roast lamb dinner cooked over an open fire was seriously one of the best I’ve ever had. After dinner I bid a hasty retreat to the comfort of my swag – pitched a few hundred meters away from where my guide was sleeping. But hang on, who will protect me if a dingo were to come calling in the middle of the night?

My trusty guide assured me he’d hear me if I screamed. So I hunkered down, fully clothed, inside the swag and pulled it up tight around my neck.

The only time I think there was a real gender issue was when I was filming in Zanzibar. Some of the Muslim Tanzanian residents found that the scantily clad tourists offensive an insult made worse by the place being marketed in the west as a honeymoon and beach destination, complete with brochures filled with bikini-clad models. It’s an issue I’ve seen crop up time and time again and is something that even affects some parts of Indonesia.

We had secured an interview with the secretary to the Zanzibar Mufti, a senior Muslim scholar. I arrived at the interview in long trousers and a long sleeved shirt, with the best intentions. To my horror I managed to upset the cleric and after the interview he shooed me away gesturing in disgust at my collar area. I was appalled at my mistake and I found out later I should have worn a longer shirt and covered my neck. At least he’d realised it hadn’t been done deliberately and went through with the interview. But I couldn’t help but think that if I really were a ‘Robert’, this wouldn’t have been an issue.

Irrespective of whether you’re a man or a woman, all my experiences point to a several reliable truths – even the best laid plans never work out quite how you’d expect them to and often it’s the journeys you take to get there, rather than the destinations themselves, that hold the most memories. But, above all, that this is an amazing world we live in and I, for one, don’t think I’ll ever stop exploring.