Thomas McCarthy was born at Cappoquin, Co. Waterford in 1954 and educated locally and  at University College Cork. He was an Honorary Fellow of the International Writing programme, University of Iowa in 1978/79. He has published The First Convention (1978), The Lost Province (1996) ,Merchant Prince (2005) and The Last Geraldine Officer (2009) as well as a number of other collections. He has also published two novels and a memoir. He has won the Patrick Kavanagh Award, the Alice Hunt Bartlett Prize and the O’Shaughnessy Prize for Poetry as well as the Ireland Funds Annual Literary Award. He worked for many years at Cork City Libraries, retiring in 2014 to write fulltime. He was Humphrey Professor of English at Macalester College, Minnesota, in 1994/95. He is a former Editor of Poetry Ireland Review and The Cork Review. He has also conducted poetry workshops at Listowel Writers’ Week, Molly Keane House, Arvon Foundation and Portlaoise Prison (Provisional IRA Wing). He is a member of Aosdana. 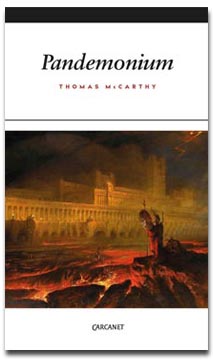 His new collection, Pandemonium,
was released by Carcanet Press
in November 2016.  www.amazon.com

Let us consider this heavy fog, so quick and Elizabethan
A thing, an after-effect of last month’s empire

That just passed over the brow of the hill
In a splendour of October brass. Now, even

Sunlit braids of golden thread that trailed
In the wake of musterings and leafy retreats,

Even braid, is invisible in this November fog;
And in its stead are these assemblies of grey, these

Shadows of trees like so many Viking long boats
Nudging forward in the unremarkable shallows.

Here, the Earl of Grafton fell. You heard the splash
As his efforts failed; and here, a Gael tumbled into slime

With the indecency of a cormorant, as a ball from Colonel
Churchill’s regiment of foot found its mark beneath fog.

That’s the way it is with this heavy mist: it makes
An enemy of mere stone and it leaves chroniclers at ease –

Which is why I like to sit at this long table with a stiff drink
Or two.  Listen, what falls in fog is not of this world.

This bare tree is doing its best; withholding its
Impulse to comment despite the freshening breeze.
All the chirping leaves it turned over are lost now
And nothing is left of the prodigious summer shadows,

Not even the memory. For a tree has no memory,
Or at least no memory that it may articulate
In the company of others. Like your head going bald

This tree has no comment to make on the shade.