Literary Dissent in the Democratic Space by Mini Chandran, Professor of English literature, Humanities and Social Sciences Dept.,
IIT Kanpur, Author of The Writer, the Reader and the State: Literary Censorship in India, Published by SAGE Publications. 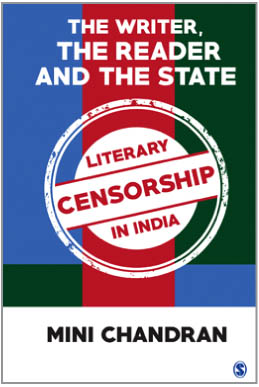 We tend to believe that our world is freer and more tolerant of dissent than the medieval ages when writers and freethinkers were burnt as heretics or put behind bars till they relented and went against their convictions. However, we are made brutally aware that the situation has not improved drastically when we hear of a Salman Rushdie sentenced to death or a Liu Xiaobao imprisoned for life. Censorship has not gone anywhere and intolerance of dissent is still as virulent; even democracies insist that your freedom ends at the tip of another’s nose. The nosey writer who pries beneath beautiful surfaces to ferret out dark and inconvenient secrets is unwelcome and will be silenced.

The book The Writer, the Reader and the State: Literary Censorship in India is an exploration of the phenomenon of being silenced or censored, especially in the world of letters where being eloquent is not merely a virtue but a veritable reason for existence. The attempt is to understand censorship as part of the triadic relationship forged between the writer, the reader and the state in the process of literary appreciation. However, rather than being a discussion of the theoretical underpinnings of the process, it seeks to address the materialistic basis of thought control, by detailing concrete cases of censorship and legal battles fought by books. The term ‘censorship’ is used mainly in the more traditional sense in the course of the book, as a broad category that subsumes various repressive measures governmental and non-governmental. This includes bans that come after publication of a book, coercive tactics exercised by a group of people to withdraw a book, or suppression of a work on other grounds.

The focus is on India as literary censorship is an issue which has not been written about much here, even as writers continue to protest against what they perceive to be a rise in intolerance of dissenting voices. Moreover, the Platonic paradigm is the norm when it comes to censorship debates in India, just like the west. The book attempts to re-think this paradigm by situating the process of literary censorship within the socio-historical contexts specific to the Indian nation state or what constituted the Indian subcontinent before its independence in 1947. In the attempt to understand why India does not have a history of censorship like other countries of the world, it explores the literary tradition of India, the position of writing and writers in the Indian context, and whether the idea of free expression and thought control are western intellectual imports into India.

The analysis of literature and literary analysis in this context shows that Kavyananda (poetic bliss) was considered akin to brahmananda (spiritual beatitude) in the classical Indian tradition, and writers were considered to be seers who helped the reader attain this state of near-salvation.  The book argues that this sublime view of art might have precluded the possibility of transgression as far as writers or artists were concerned, so much so that it was not easy for the writer or artist to be a rebel or freethinker. The inbuilt regulations governing art and art forms with regard to theme and style during the classical period probably prevented the possibility of literary transgressions which had to be monitored.

This exalted position of the writer changed and evolved from the classical period onwards but the idea of state control on creative work became more systematized only with the advent of the British colonial rule in India. The colonial period also ushered in printing and methods of surveillance like licensing of printing presses. This is also perhaps the period in which the idea of a more comprehensive state control over production of creative art enters the Indian subcontinent. The freedom from British rule should have ensured the freedom from all such restrictions but pragmatic administrative measures retained these laws. The religious, cultural and linguistic diversity of the new nation required the administration to be sensitive to the sensibilities of particular communities. Writers and artists now had to be careful not to overstep boundaries with respect to religious beliefs and communal sensitivities. Books which were suppressed after 1947 in India thus include those banned by the government and books withdrawn because of public demand. So, while Salman Rushdie’s The Satanic Verses was banned by the Customs Act, Aubrey Menen’s Rama Retold was suppressed on the basis of demands made by a group of people. This included fictional and non-fictional books written in English as well as regional language books; while some like Samaresh Bose’s Prajapati fought a prolonged legal battle against charges of obscenity in the Supreme Court, Taslima Nasrin’s Dwikhandita was banned because  it offended religious sentiments. These cases of socail censorship are dealt with in detail along with case studies of books which were banned or had fought legal battles in the courts of India.

The analysis of the process of state censorship encompasses the period of the Emergency and uncovers an inexplicable aspect of writing and writers in India. This is the relative silence maintained by writers even when they were aware of the violation of democratic rights of free expression. The Emergency narratives, which are few and far between, point to an alarmingly apolitical writing community in India that existed then in the country.

The book concludes with an overview of censorship in India today. It analyses the contradiction apparent today, which is that of the public demands for bans from the people who wish to protect themselves. The sensitivity to communal sentiments which we saw immediately after independence in 1947 in the country has grown to an extreme form of political correctness that has shrunk the artist’s domain to a few square inches of ‘safe’ material. Censorship has slipped out of the administrative machinery’s grip and is threatening to become a weapon in the hands of the mob; political censorship has been superseded by social censorship The fear of this social censorship has impacted the writer more – caught between the desire to be politically correct and the fear of being targeted, the writer now exercises self-censorship and chooses not to express unsafe ideas or thoughts; this makes for a sanitized but mediocre literature.

The writer’s partner in the creative act – her decoder and confidante – is the reader. Censorship debates hardly acknowledge the personality of the reader; this is a paradox considering the fact that the debate is always about the impact of the work on the reader. Even though contemporary censorship laws take into account the impact of literature on the ‘average person, applying contemporary community standards’, it is precisely the average reader’s voice that gets drowned in the din surrounding censorship controversies. The book tries to locate the elusive reader in the dust of censorship battles.  However, it does not point an accusing finger at political authority and exonerate the reader but reminds the reader also of an activity that is underrated, which is of responsible reading.

The book is not a polemical treatise but an attempt to understand the power of writing and the position of the writer vis-á-vis social as well as political forces. It provides information about the various laws which govern censorship in India as well as the important legal disputes that have occurred with regard to free expression in the field of literature. It is thus a combination of archival information and insightful analysis into the theoretical aspects of the process of literary censorship in India.

Mini Chandran is Professor of English literature in the Humanities and Social Sciences Department, IIT Kanpur. She writes occasionally for The Indian Express. A practising translator, she translates from Malayalam to English and back, and has published translations of fiction and non-fiction titles, besides academic papers in national and international journals. Her translations include A Revolutionary Life, biography of Lakshmi Sahgal (from English to Malayalam) and Autumnal Memories, biography of prominent Malayalam critic Joseph Mundassery (from Malayalam to English). She has also co-edited Textual Travels: Theory and Practice of Translation in India. Besides literary censorship, her other areas of research interest are translation studies, Indian literature and Indian aesthetics.