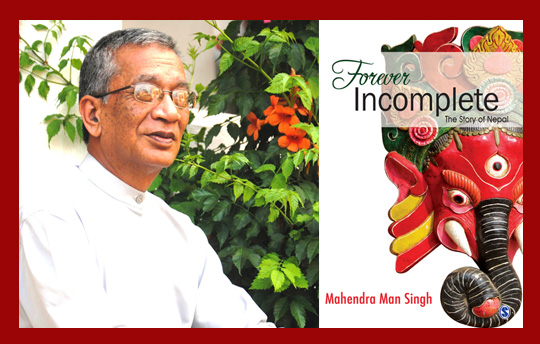 Why did you write this book and what do you hope to achieve with it?

Writing the book is my way of answering the many questions my children asked of me. On a wider scale, it is also to inform the younger generation in Nepal and around the world about Nepal.

The older generation may have read the works of Perceval Landon – early 20th century or even those of Daniel Wright, Hamilton and Kirkpatrick – 19th & late 18th century. There is another of the 1960s by Rose & Joshi. The latest is by Whelpton preceded by those of Jonathan Gregson and others instigated by the ‘royal tragedy’. I have listed these titles and more, in the Bibliography.

While all these works are scholarly and informative in their own way, the travails endured by the people of Nepal through their long history to develop, preserve and foster their existential ethos and particularly their journey to human rights and democracy has been told only intermittently and I feel, only in passing.

To my knowledge, no other book in English describes in as much detail this long journey as I have done in Chapters IV, V, VI and VII.

The reader I hope will receive more information from my book and therefore be able to understand and appreciate the people of Nepal better. I have tried to present history in a more reader-friendly style unlike the dry & dusty styles of the past.

What impact did the 2001 ‘royal tragedy’ have on the people?

I have written, rather briefly, about the feelings of the people in ‘Epilogue’. At the personal level, my brain did not function for 15 days. Call it shock, horror, disbelief and finally, coming to terms with it very, very sadly. It must have been the same for many people. As I heard about it later on, a woman in the rural area went insane with grief.

From monarchy to democracy Nepal has come a long way. Please comment.

It is actually like this: Monarchy – Rana Oligarchy – Democracy – Monarchy – Constitutional Monarchy & Multiparty Democracy. My book deals with the above transitions.

Is Nepal an appendage to India or does it have a distinct identity? And if so, how does one define this identity?

A country, a nation of people with at least 5000 years of history will definitely have a distinct identity. Granted that our neighbors India and China have longer histories –about 6000 years at least but the distinct identity of Nepal was recognized. Imperial China and Imperial Britain recognized this. The Republic of India did so in 1950.

The ill-informed in India will say rather wistfully that Nepal is an ‘integral part’ of India. It is like saying Alaska is an integral part of Canada and Canada of USA or Mexico of USA. China has never said Nepal is an ‘appendage/ integral part’ of China. Identity is defined by geography, history, culture, language and icons. Nepal has this -distinctly and in full measure. All this is dealt with in the book. I leave it to the reader to discover and understand.

Lord Hansard’s deposition to the United Kingdom Parliament on 22 June/2006 also helps. “…Nepal, far from being a faraway country at the edge of global affairs is in fact at the centre of the emerging new world pattern between the awakening giant economies of rising Asia.”

“A violet by a mossy stone
Half hidden from the eye,
Fair as a star, when only one
Is shining in the sky”

This is from Shelly and distinct enough I think. On a lighter note, because of our geographical location, sometimes I think the Nepali is like that little drummer boy of Gunter Grass banging his tin drum as he marches along the narrow lane in between tall buildings.

Who are the Gorkhas and are they different from other Nepalis? Could you give us an overview?

Gorkha is the name of a district in west Nepal. It was a petty kingdom that expanded aggressively and eventually led to the formation of a unified Kingdom of Nepal. It was and is peopled by various ethnic groups as is the entire country of Nepal. Chapter I describes this. The British referred to these soldierly people as the ‘Gurkhas’ after their contact in the war of 1814-1816 and later on during the two world wars when the ‘Gurkha’ fought alongside the Allies. Over a dozen received the Victoria Cross and their bravery and valour became well known. This has been a matter of pride for all Nepalis. I have talked about this in Chapters II & III. The ‘ Gorkhas’ are not different from the Nepalis. They are Nepalis.

In the politico-socio-economic scenario, where is Nepal heading today? What has been the socio-economic influence of the Maoists?

There is an appropriate Urdu sayari (couplet) that indicates where Nepal is heading. I have translated.

“But two steps, did I take in jest
And my life, I have spent in quest.”

The Nepali people were made to take and so took two steps – republicanism and federalism. They are now wandering about. This happened because the Maoist, supported by our very friendly neighbor India, went on a rampage declaring ‘total change’ as their mission and killing 16000 innocent people and displacing over a hundred thousand people in the process. So you can surmise the socio-economic impact. I have not written about/ on the Maoist in my book as there are many volumes written on/about them by more knowledgeable people and also because these are current events. However, none including India can explain satisfactorily why a system of ‘Constitutional Monarchy and Multiparty Democracy’ with a constitution that also enshrines sovereign rights of the people, a bicameral parliament and human rights was attacked upon and pushed aside. Dr. Man Mohan Singh, Prime Minister of India, while addressing Parliament had said “ There cannot be any root, trunk or branch of any cause that justifies the killing of innocent civilians.” The two steps taken in jest i.e. without knowledge have in essence clouded the politico-socio-economic scenario.

Could you give us a glimpse into your life and works?

I am married and we- Kamala and myself, have three daughters. I have always been in the private sector. My forte has been starting/ doing something different, something as yet untried, something new. The book is an example. However, please do not ask me to walk on my head or even do a headstand the Yoga way. Not really my cup of tea! Kamala is a Yoga Instructor and coaches many students-local and foreign. The Bolshoi ballet in Moscow was absolutely fascinating. Have also been around the Schenzen countries.

Fish & Chips, the original, in the UK tasted good and the castles quite impressive. When I deplaned in Dundee, Scotland, my impression was “So foul and fair a weather I have never seen.” Touring the vast Forbidden City in Beijing was, believe me, quite exhausting but very, very impressive. The Taj Mahal in India is indeed a wonder. Will be going to Singapore again end October.

Some of my happiest moments are when I am flat on my back reading a book. Nevertheless, it was only after my eldest daughter introduced me to Indian/Urdu ‘Gahzals’ i.e. poems/songs that I discovered how ignorant I was. My second daughter gifted me a collection of Shayars i.e. couplets of Mirza Ghalib – English translations. My favourite pastime is trying to improve upon the translations.

I have been an intermittent commentator from the eighties on the socio-politico-economic aspects of Nepal.

I do not write profusely. My last writings have been book reviews – Jinnah/ Partition and prior to that of Sugata Saurav, the English translation of the life of Buddha. Simply love to listen to Blues on a cloudy and rainy day. Heavy Metal etc. is rather noisy. The Saxophone soothes. Classical music- Indian and European is enchanting. Sufi songs are so touching! Mithila paintings precede Picasso by hundreds of years. Our own Tantric paintings have all the elements – impressionism, surrealism, realism. This is but natural for a nation of people with at least five thousand years of history.

At present, I am in the process of establishing a grid connected Biomass Power Plant, of 720Kwe installed capacity. The plant site is in Lumbini, the birthplace of Buddha. Power supplied by the plant will replace to some extent diesel generators now being used and will reduce pollution in and around Lumbini, a World Heritage Site. The beauty of this project is that agro-forest residues which were heretofore unutilized by the local community will be utilized for the generation of electricity. Hence the rural community – women in particular, will have a source of incremental income through the sale of biomass to the plant. This makes it a ‘Community Friendly’ power plant.

The technology used – gasification, ensures that no noxious fumes are emitted. This makes it an ‘Environment Friendly’ power plant. It fulfills the 3 Es – Energy, Environment, Economy i.e generation of energy in an environment friendly manner with economic benefits. My project, Narayani-Shanker Biomass Power Plant (NS-BPP), is in many ways something new in Nepal. I am going to Singapore to make a presentation to the Asian Development Bank. Project Consultants are ABETS/CGPL Indian Institute of Science (IISc.)Bangalore, India.

Mahendra Man Singh is a first time author and a commentator on the social and political conditions in Nepal. His professional life has mostly been in the private sector and currently he is Founding and Managing Director of TMB-Energietechnik (responsible for Alternate Energy Projects). He has been actively involved in the politics of Nepal and is a known face in the corridors of power—both in the now deposed monarchy and in the Nepali Congress.

He has been actively involved in social programmes such as the Organization for Participation in Development (ORDEV) Nepal, of which he was the Founder-President. The author has taken keen interest in formulating and implementing rural development projects with a special focus on ‘skills training’, ‘adult education’, ‘water supply’ and ‘small credits’. This particular programme was conducted under the ‘Basic Needs Program’ of King Birendra.