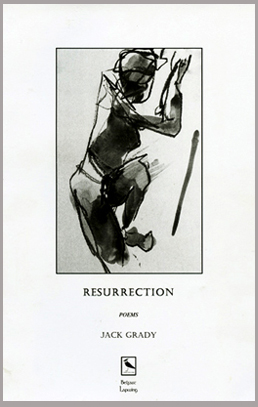 In a country which apparently prides itself so much on its writers, perhaps without even realising it, we Irish have become a smug, nationalistic breed, with an obsession with form to the practical detriment of any real actual content. There are exceptions, of course. But in a culture awash with literary festivals, creative writing workshops, writers’ groups and literary periodicals, be they online or off, how much actual writing out there is saying anything of any real consequence, which will be remembered, and this is the acid test, even 50 years from now? Everyone, apparently, would like to be, but how many out there actually are writing?

These are questions one should ask oneself, every now and again, in- order to maintain a bit of self-awareness. As the amount of spin, particularly living in an age of social media, as we do, is simply unbelievable. So, what a relief then to come across an actual book, a slim collection of poems as it happens, which actual has something pertinent to say about these times we are living in and this rather sad and extremely troubled world, written by a writer who was born in the USA, saw military service in the middle-east and finally decided to settle down on this wind and rain battered island off the west coast of Europe.

Jack Grady, by his own admission, only returned to poetry in 2014. I happened to come across some of his writing while I was editing a small anthology for an independent French publisher. Jack’s poems immediately stood out, as he was doing some highly original work, and this was mainly down to the treatment of the content of his writing. So, here I am four years later, with a copy of Jack Grady’s debut collection Resurrection published by my old friends in Belfast, Lapwing Publications, run by the stalwart and defiant Dennis Greig, father of Amos Greig, who runs A New Ulster.

Firstly, a word about Lapwing. The first thing that strikes you about the production of their books is the sheer elegant simplicity of the slim white, hand-bound productions. The Greig sept of the MacGregor Clan has been printing and binding books since before 1632, the reader is informed, under the copyright details. I notice my own name then in the acknowledgements section, for my ‘early encouragement’ in Jack’s ‘poetic resurrection’. This is personal. I had been encouraging Jack over the years with the odd message, urging him to send his work out to magazines, and I had further occasions myself to publish some of his French poems and translations in Walter Ruhlmann’s mgv2>datura, now defunct. This is something that Jack Grady and I share, a common love of nineteenth century French literature. We have both dabbled in writing in French and have translated both our own work from the French and that of others. This is an important distinction to make, as Jack and I share, due to our mutual appreciation of French literature, many similar ideas about what good writing constitutes. And so we both find ourselves, like so many other writers living in Ireland, at a very far remove for what constitutes as ‘good writing’ and which is published by more main-stream publishing houses in Ireland.

Despite all talk of progress, Ireland still remains an incredibly conservative place, and particularly in poetry publication. This is important for me to state, as Jack Grady and I believe firmly in the cathartic nature of the art, and also its importance in being a powerful tool to highlight social issues, such as war and violence. We both share, Jack and I, a love of the great Franco-Irish literary tradition. A collocation that rather bizarrely you seldom come across in this country, you are much more likely to hear the all too familiar Anglo-Irish. I remember having a wonderful conversation with the great French academic Brigitte Le Juez, in the canteen of DCU where she lectured on Comparative Literature at the time, and we both spoke about our mutual incredulity at how Anglo-Irish Literature was a term so much more  on everyone’s lips, in Ireland, rather than the less often heard Franco-Irish. And yet, where did Wilde, Yeats, Joyce and Beckett all go, at some point in their lives?

Roland Barthes famously wrote in Fragments on a Short Discourse on Love how there is a climatic moment in every text and which he compared to the orgasm, and so which was followed by le petit mort, or little death. I should like to treat in this review of Jack’s wonderful book what I consider to be the climatic moment in the book, in other words the piece, or poem in this case, which brought me the most pleasure.

For me, the climax in Jack’s book is the poem The Muse Declares Her True Geommetry , as it is a poem which I wish I had written myself. All true poets, worthy of the name, will know exactly what I mean when I say this. As poets are, by their very nature, a highly competitive species. Don’t be so naïve, for god’s sake, as to think that artists and writers are all lovey dovey, just because they’re artists. They are human, rather, and so like most humans share all the nasty traits that mere mortals share, and more!

I am not counted in steps or feet,
or in meter, for that matter,
or even in beats. I cannot be caught
by the pause for an inhalation,
nor can I be caged by rectangles or shapes.

This is another thing that Jack Grady and I share, an appreciation of the muse. Now, in the 21st century, what does this mean? I have often read in poet’s bios, poets referring to themselves as ‘muse poets’, making this distinction, as if there were any other. There are no other kind of poets. Let me be categorical; in this age of social media darlings, and self- publicists, self- promoters, performers, spoken word enthusiasts, social media wizards, and other assorted mixture of charlatans and assorted lunatics, if you have no respect, or even knowledge, of the muse You are not a poet. Call yourself anything else, but that! And while I am on the subject of poets, one should be very careful when using this word. Less is very much more than more. I have been writing poetry for over thirty years, have written over 15 books ( published eight, and have edited two anthologies) and I very rarely use this descriptor to describe myself. As it suggests something permanent. A fait accompli. When there could be nothing further from the truth. Here is a motto to live by. Jack Grady lives by it, and so do I. YOU ARE ONLY AS GOOD AS YOUR LAST POEM.

My spirit cannot be bound by a four -line stanza,
each line with four feet or three or four stresses,
or by dozens of stanzas identically the same.

There is a wonderful confidence here that few poets/writers today can share. One of the reasons why this is so is because Jack Grady is a writer who is coming at the craft of writing with a very real LOVE for the medium and which he has been practising, whether by reading poetry and verse for so many years, as well as by trying to write himself. You cannot fake this, nor imitate it. For love, and so knowledge of the form, is either there or it is not. In this sense, I would make the distinction that Jack Grady is not a careerist, in the sense that he is to be found hobnobbing at every social event, cosying up to editors and art officers, being, in short, sycophantic to the point of self-caricature. These creeps actually exist! Rather, he is actually to be found out on his small farm in the west of Ireland ( he is one of the founders of The Ox Mountain Writers Group) reading Rimbaud or Walt Whitman with visions of the Taliban, or Duke Ellington, in his head.

Don’t force me to split
into tercets or couplets or box me
in a sonnet. I am neither
trapezoid, cylinder, nor quatrain.

Neither is Jack Grady to be found among the dour-faced legions of academia, which is another favoured preserve of so-called poets in this god-forsaken island. The nincompoops  who are both humourless and timeless in their self-perpetuation. These narcissists of mind who consider themselves to the favoured gate-keepers of ‘ thee Truth’, and who through powerful connections, due to their political astuteness, are in positions so powerful that they get to determine what is to be given precedence in our nation’s principal publications, usually coming from the same two publishing houses. So, one can clearly see that poetry, like every domain in this small island, is under the very careful constraints of a privileged few and who, like all cartels, look after one another. I call this very specific syndrome, which occurs here in Ireland but which in fact goes on in every society, RTE Guide Syndrome. As you see the same old faces being repeated again and again, every week, of every year, till you are sick and tired of them. And eventually, mercifully, they become mere wallpaper in the end.

Now there is a line that you will never see published in the many RTE Guide’s of this land and which exist in the Irish poetry publishing sector. I am using this last word, sector, very deliberately now, as it equates with the terminology used by politicians, when say relating to issues of agri-culture! An agrarian people, us Irish, don’t you know. Ooh aye!

I roll to the rhythms of ejaculation and death.

Say it over and over again. You see Ireland never had a beat generation, like America had in the fifties and early sixties. The nearest we had to it were Flann O’ Brien and Paddy Kavanagh, and the poets and writers of Baggottonia. I remember sending a review on to one of the country’s ‘top’ poets, and who considers himself to be a ‘revolutionary’,  and when I used the word ‘cuntry’ in respect to Ireland, a homage to Joyce, he got all indignant and told me he couldn’t publish a piece like that. This is exactly what I am talking about, and this is exactly why poets like Jack Grady, real poets that is, not fecking eejits spending their time on Twitter and other forms of social media 😊 are to be cherished in times like these. In a world of selfies, cell phones, Twitter accounts and hashtags, Jack Grady, poet resurrected, stands tall and elevated.

I am free in the ocean
with every gasping breath,
and I resonate in the lobtail
of a hungry whale.

Peter O’Neill is the author of several books, most recently More Micks Than Dicks, a hybrid Beckettian novella in 3 genres currently out of print, and The Dublin Trilogy: Poems & Transversions 1992-2017, a singular engagement with a 19th century French Master; launched in Paris in November last year to commemorate the 150th anniversary of Baudelaire’s death. He recently presented je la dis comme elle vient– The Appearance of the Homeric Muse in Beckett’s Comment c’est/How It Is at the How It Is Symposium organised by Gare Saint Lazare Players Ireland at the Centre Culturel Irlandais in Paris. He teaches EFL and resides in Dublin. His writing (be it poetry, translation, critical reviews or academic presentation) has been published widely, being translated into French, Italian and German. O’Neill has also edited two anthologies of poetry; And Agamemnon Dead (mgv2>publishing, 2015) and The Gladstone Readings ( Famous Seamus, 2017). He set up Donkey Shots, an avant -garde literary festival, in his hometown of Skerries, North County Dublin, and currently hosts The Gladstone Readings.  https://www.irishtimes.com/culture/books/peter-o-neill       https://www.irishtimes.com/culture/books/