Chalk Dust will be published by Salmon Poetry in May 2018. The poem deals with the subject of a Boy’s Catholic Boarding School in Ireland in the 1960s.

Noel Monahan has published seven collections of poetry. His most recent collection: Where The Wind Sleeps, New & Selected Poems, was published by Salmon in May 2014.He has won numerous awards for his poetry and drama. His work has been translated into Italian, French, Romanian and Russian. His most recent plays include: “The Children of Lir” performed by Livin’ Dred Theatre. His poetry was prescribed text for the Leaving Certificate English Course 2011 and 2012. His seventh collection of poetry: “Cellui Qui Porte Un Veau” a French translation of his work was published by Allidades, France in October 2014. An Italian selection of his work was published in “ Tra Una Vita E L’Altra”, published by Guanda, 2015. His work appears in the recent Anthology of Poetry “Windharp” Poems of Ireland Since 1916, edited by Niall MacMonagle and published by Penguin, 2015. A new collection of poetry entitled: “Chalk Dust” is due for publication by Salmon Poetry in May 2018. This is Noel’s eighth collection of poetry. 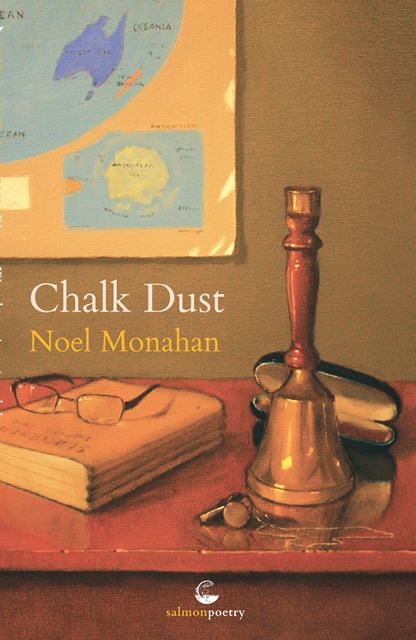 And There Were Day Boys.

Young men on bicycles, riding through the lanes and roads, at seven o’clock in the morning.

I see them cycling up the avenue with rain hats and coats,

Pilots on two wheels coming through the fog and rain, with wooden cases full of books

Copies strapped to the back of their bikes. Some come from far off Stravaignabo

Where the cows wander aimlessly in the fields and asses are skinny as greyhounds.

Or so some of the boarders say.

On reflection, Day Boys could be your friend. They were good for smuggling stuff into the College: brown sauce, sardines, sandwich spread, canned spam and cigarettes. Some stuck to strict black-market prices, others were happy just to oblige. At lunch time when we headed to the refectory, they ate their slices of loaf bread, drank milk or tea in the class rooms. When class ended they headed home again, past fields, country shops, townlands and parishes, some as far as nine miles away, cycling along the edge of light, climbing hills with a rising moon and arriving home in the dark

The hatch opened in the College refectory. Clatter from skillets and pans. Lids strayed away from pots. Cups and saucers sang from trolleys. Someone bent a spoon, there was great steam coming from a cauldron and John Joe, a young cook prodded something with a long fork. It was important to be well in with John Joe. He was in charge of pots in the kitchen: pots of spuds, pots of stew, pots of custard, pots of prunes… We dined underground at long tables, so hungry we could eat the timber. The refectory was a basement meant for a store room. A statue of St. Joseph stood on a wooden pedestal with nothing to say. Food in St. Norbert’s College was a science of small measures, the minimum amount of everything: bread, margarine, porridge, potato mash … We had cheese and a dollop of red jam on Friday to make the stale bread bearable and palatable. Sometimes we had two prunes and a ladleful of custard for desert. The Dean with an anorak over his white habit intoned:

Bless us O Lord and these thy gifts…

The noise was mighty: a sea of tea cups rattled, eighty chairs scraped the concrete floor, feet shuffled and a symphony of knives and forks commenced. We had porridge mornings, except on Sundays when you were treated to a sausage. Everything we ate came from the earth: carrots, potatoes, turnips, peas … tiny peas hard as bullets. The stew was brown on Tuesdays, with meat, if you could find it. A line of mouths opened to thick slices of loaf bread with marmalade on Thursdays. Butter would be nice, but you accepted margarine. Every morning and evening the fat tea pot sat on the table, waiting to draw. Michael John grabbed an extra sausage and the Dean spotted him and he had to give it back. A fly Zee …Zees … in the jam jar. The flies would talk to you in May. They knew it was getting close to the long summer holidays and the refectory would be closed

I will eat food long before

The other eaters of food

Can get their hands on it,

The lids returned to the pots. The hatch- door closed. The Dean Intoned:

We give thee thanks, O Almighty God,

For all thy benefits …

Come May, hymns triggered our concentration into serious rehearsals for the Liturgical Music Festival, held yearly in Cavan Cathedral. We intoned Gregorian chant. We prepared a special piece to be sung in two part harmony. The sacredness of Latin words lifted our souls:

We walked up the steps to the cathedral in full uniform, our blazers brushed down, our motto: Veritas Vincit / Truth Conquers, on our breast pockets. The spire soared above us. We felt important. Inside, organ music rang out. There was an air of nervous tension. Fr. McGrath showed us to our seats:

Don’t be shy boys and sing out.

Secondary school students were crowding in. The convent girls arrived, at least seventy of them in their maroon uniform, complete with caps and pale faces.

It was a solemn Mass with the Bishop as chief celebrant and he wasn’t much of a singer. The nun with the thick-framed glasses kept checking the girls. The Mass went on for two hours, no short cuts with Gregorian chant. After the Mass we all had to assemble at the Poor Clare School Yard and await our call to perform our individual pieces and have them adjudicated. A freak shower of hailstones in May had us stampede into the main building. We were never so close to convent girls before, so close you could smell the faint perfume from their uniforms, so close you could feel the warmth of their bodies. It was all:

Girls:Stop that unruly behaviour at once

The nun with the thick-framed glasses blamed the hailstones for drawing us together. After the competition we went down to McManus’ Cafe in Bridge Street for fish and chips. A few of the Loreto Girls followed us in. We chewed gum, lit up our cigarettes and played the juke box. The Kinks were popular:

My makeup is dry and it cracks on my chin

I’m drowning my sorrow in whiskey and gin

We were longing for something to happen but as usual nothing really happened. A few of the girls promised to write to us and send us on photos. And the nun with the thick-framed glasses pushed open the cafe door.

The bus is waiting girls

The Loreto Girls made a fast exit and we were left to play one more record on the juke box.