The Sound of the Andes, poems by Claudia Serea, Romanian-born poet, editor, translator.

Claudia Serea is a Romanian-born poet, editor, and translator who immigrated to the U.S. in 1995. Her poems and translations have appeared in numerous journals and anthologies from the U.S., Europe, Australia, and New Zealand, such as Field, New Letters, 5 a.m., Meridian, Word Riot, Going Down Swinging, The Lake, Cutthroat, Apple Valley Review, Green Mountains Review, International Poetry Review, Ascent, Connotation Press, Harpur Palate, Contrary Magazine, Poets & Artists, and many others.

A seven-time nominee for the Pushcart Prize and a four-time nominee for Best of the Net, Serea is the author of the full-length poetry collections Angels & Beasts (Phoenicia Publishing, Canada, 2012), A Dirt Road Hangs from the Sky (8th House Publishing, Canada, 2013), To Part Is to Die a Little (Cervená Barva Press, 2015) and Nothing Important Happened Today (Broadstone Books, 2016). She also published the chapbooks The Russian Hat (White Knuckles Press, 2014), The System (Cold Hub Press, New Zealand, 2012), With the Strike of a Match (White Knuckles Press, 2011), and Eternity’s Orthography (Finishing Line Press, 2007).

Claudia Serea belongs to the poetry group The Red Wheelbarrow Poets and is one of the curators of the Williams Poetry Readings at the Williams Center in Rutherford, New Jersey. She writes on her commute between New Jersey and New York. 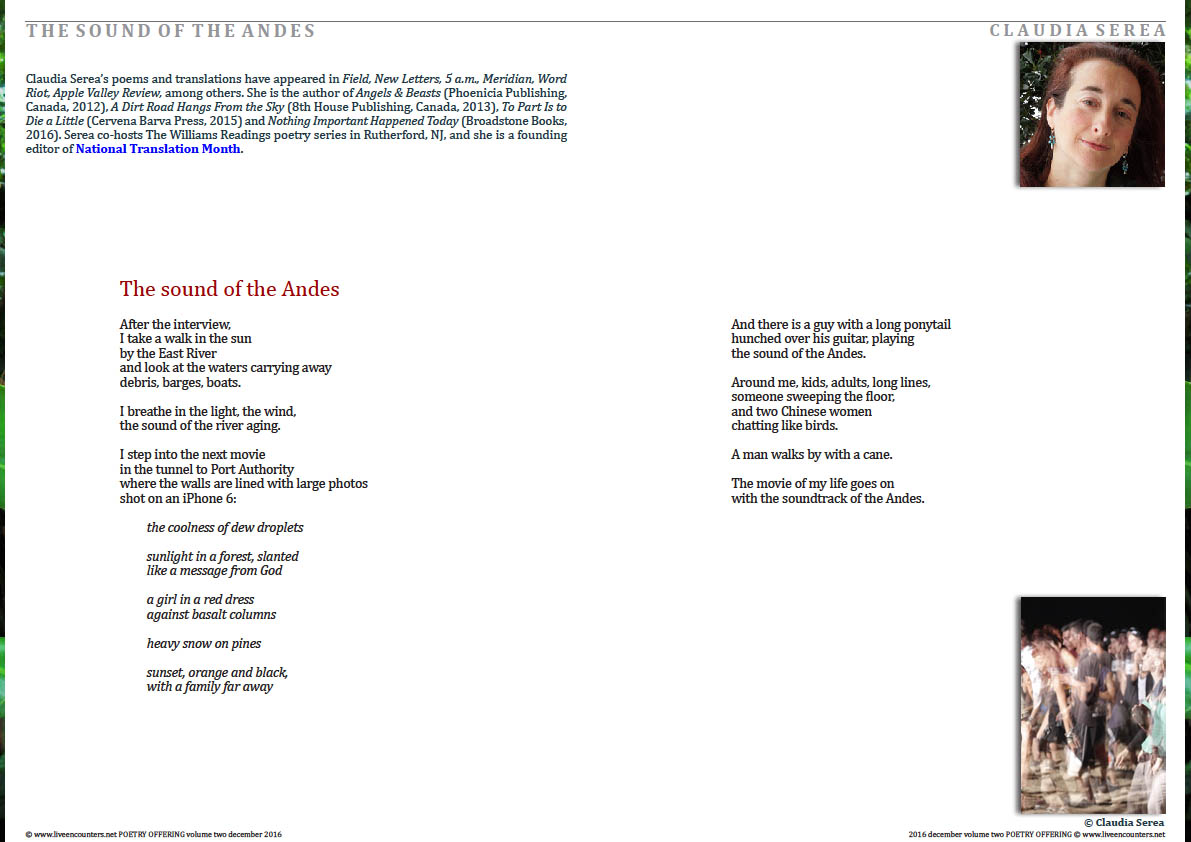 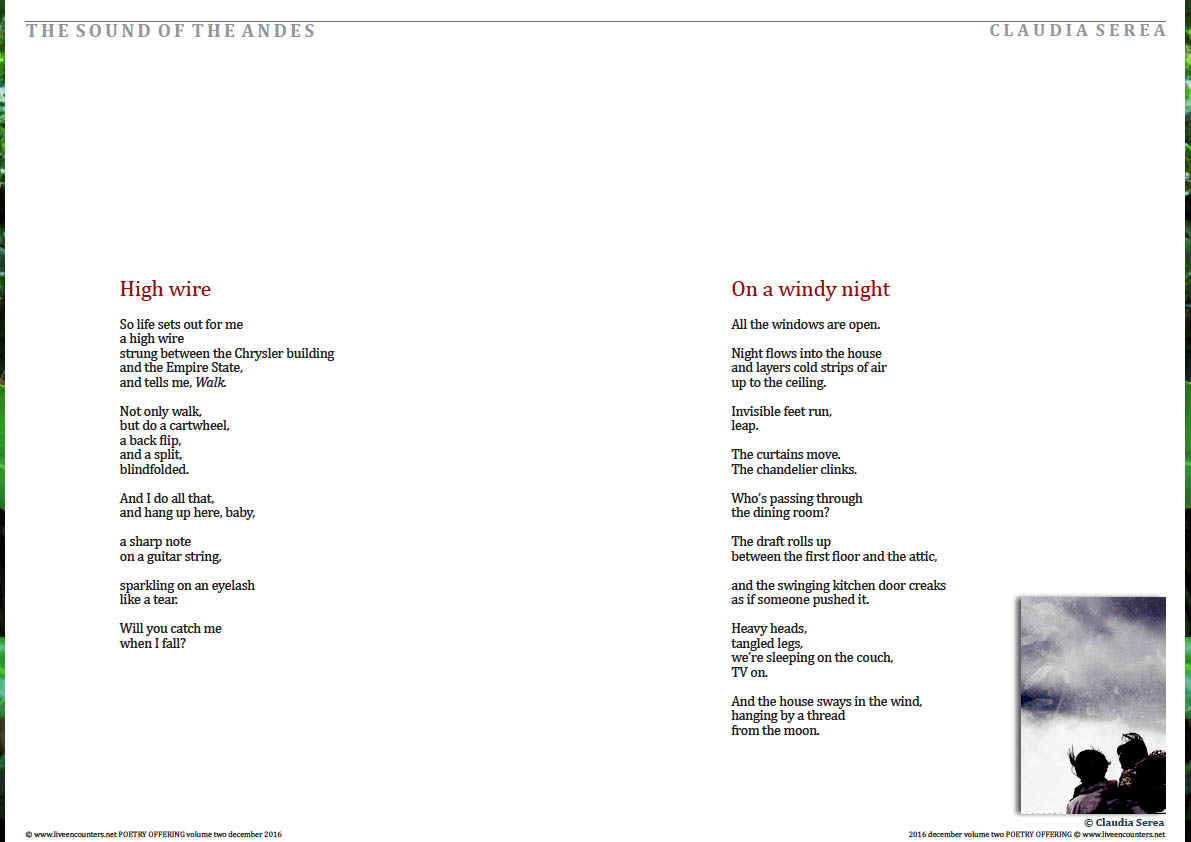 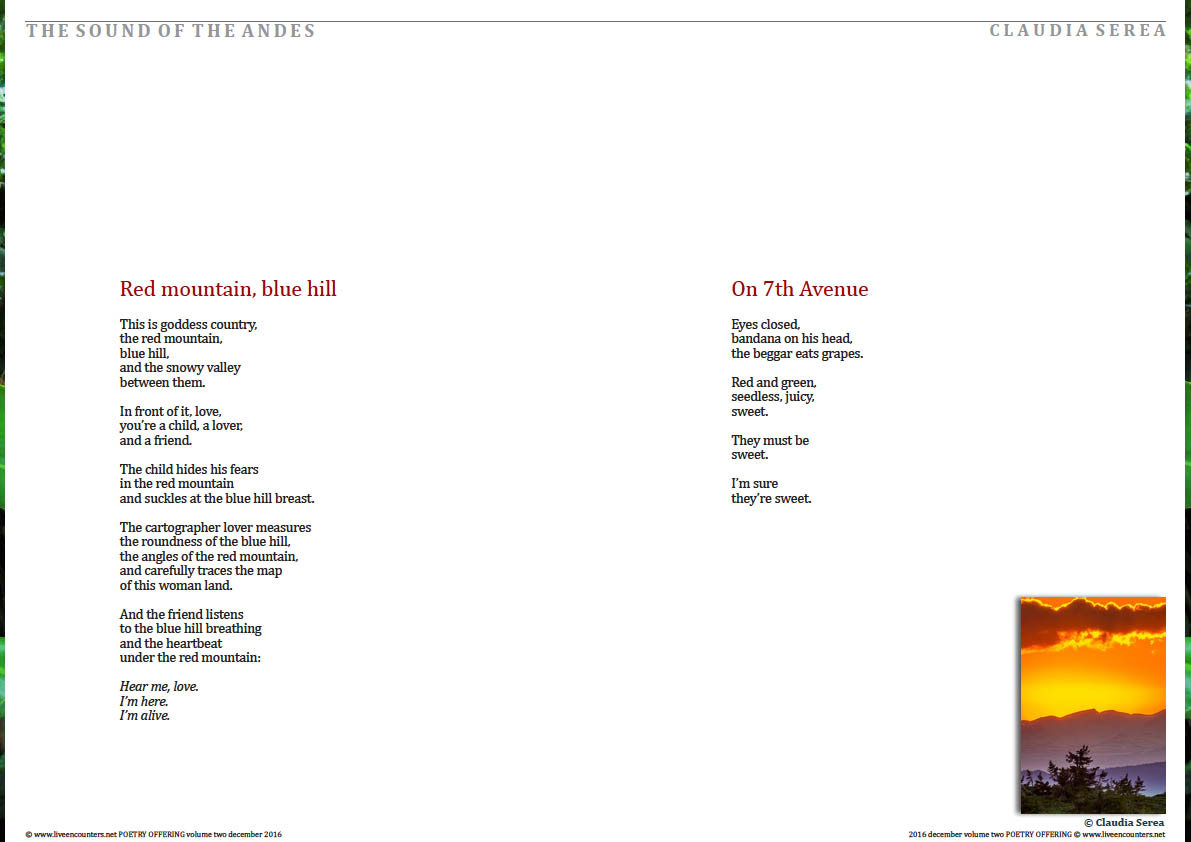 -In 2015, Claudia Serea was featured in the documentary Poetry of Witness, alongside Carolyn Forché, Bruce Weigl, Duncan Wu, and others.
– The Economist featured an interview with Claudia Serea in 2015 on its culture blog Prospero
-2015 Charter Oak Award—Short-listed finalist for Best Historical for the poem The Dictionary
-In 2014, the poems from the sequence My Father’s Quiet Friends in Prison, 1958-1962 were featured in several short videos: The Moon, http://movingpoems.com/poet/claudia-serea/,
The Gruel, http://poetrystorehouse.com/2014/05/17/claudia-serea-poems/#smith, The Blanket, http://poetrystorehouse.com/2014/05/17/claudia-serea-poems/#broderick1, The Small Stone http://poetrystorehouse.com/2014/05/17/claudia-serea-poems/#broderick2
-2014 Award for Poetry Performance, Levure Littéraire (France)
-2013 New Letters Readers Award for the poem My Father’s Quiet Friends in Prison, 1958-1962