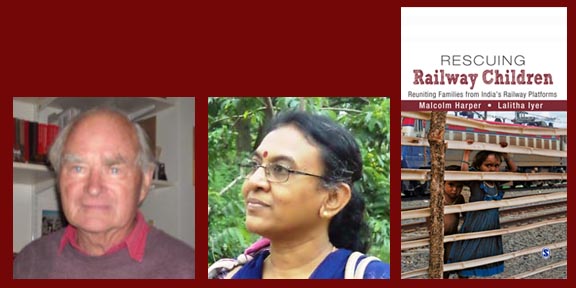 We thank the authors for taking time out to pen an article on their book.

Hundreds of children who have run away from their homes arrive on the major railway platforms in India every day. There are also many children who lose their way or get accidentally separated from the adults they are with. This book is about the challenges faced by these children who see no easy way to get back home.

The first chapter presents an overview of the situation in India, bringing together the estimates of the number of such children, the challenges they face on the platform and thereafter, the efforts that are being made to remedy the situation in their favour by NGOs and the overall experience of Sathi in reuniting these children with their families.

The policies, rules and regulations on child protection which are relevant for such children on railway platforms are examined in the next chapter. Bodies such as the National Commission for Protection of Child Rights and the district level Child Welfare Committees and Government Children’s Homes are described. The gap between the resources available and the needs of these children is highlighted.

In the next few chapters we present the children’s point of view of arriving on the platforms and moving through the shelters, government homes and ultimately succeeding in finding their way back to their families. The efforts made by staff of NGOs like Sathi to identify, rescue and reunite them with their families or send them to appropriate institutions are also detialed. These narratives are based on the cases and records of Sathi and we also had several meetings with children themselves.

Chapter three describes a typical day on a railway platform and the feelings of children as they arrive. Sathi’s staff on platform duty have a tough routine. They have to develop and build rapport with potential allies like the Police and Vendors and also to be on guard against others who may be interested in grabbing new arrivals, such as child traffickers and the older children’s platform gangs.

Chapter four presents the typical routine in a Sathi shelter which is an open shelter which hosts children till they can return home or be sent to appropriate alternative locations. Children get basic needs and a caring friendly place to relax in. As they unwind they choose how much they will divulge about themselves. The staff is watchful but gentle throughout and counsellors are available to talk at length with each child.

In chapter five the actual working of a Child Welfare Committee (CWC) is described through the children’s eyes, based on our direct observations and research reports available in Sathi. The experiences of Children in Government homes are also described. There are many issues that children face in these homes which are presented from the children’s perspective.

Chapter six presents an overview of a camp with focus on family reintegration. Sathi organises these camps for children who have spent some time away from home on trains or on station platforms and need a period of self-examination and guidance to reorient their lives. The boys settle down to deeper reflection on their choices and opportunities and most of them are glad to retrace their steps and return to a more orderly and settled life. A variety of inputs are skilfully interwoven to create the atmosphere for calming the children. These are described from the children’s eyes.

Chapter seven is on the theme of homecoming and the tumult that this generates in the whole village or neighbourhood. The relief and joy of parents and the deep satisfaction that the Sathi team derives from these reunions is also presented. Many small steps that together add up and help the child to ‘live happily ever after’ are presented here.

Chapter eight reverts to the larger panorama and describes Sathi’s efforts to build partnerships and collaboration to take their work forward. It concludes by summarising all the arguments for and against the different options such as family reunification,

Chapter nine uses the Hart framework of children’s participation to study the range of interventions developed by the NGO sector to address these issues. The challenges of balancing between the current comfort of the child and the skills required for the future have been addressed in many creative ways by various NGOs and these ideas and efforts are presented in the chapter. They are also compared in terms of the rungs in the ladder from manipulation to full participation.

Chapter ten brings in international comparisons of how the issues are dealt with in more developed or better administered systems. It highlights options now favoured such as fostering and the redesign of institutional care systems to create more of a family atmosphere.

We concluded with chapter eleven which offers an analysis of the future directions Sathi may wish to take in the emerging scenario. An annexure provides the history of Sathi over the last two decades.

We have tried to keep notes and references to the minimum. Our main sources of information are the reports and research of Sathi and our own conversations with various people and above all with children themselves.

If you are a reader interested in the bigger picture you may prefer to read chapters one, two, nine, ten and eleven. If you are drawn to the book because you deeply care about the lives of these vulnerable children you will wish to dwell on chapters three, four, five, six, seven and eight. We strongly recommend that you break your pattern and read the other bit as carefully as you read your preferred bit-or read the whole book carefully.

The issue needs both your head and your heart. This has prompted us to keep the children’s experiences in the forefront throughout the book. We hope that on reading this you will actively look for opportunities to include family reunion as a serious option in any intervention or activity you may wish to influence, to support or to take up yourself.

This is the second book we worked on together – and we were certainly on unfamiliar ground when we began. It took us far away from all the usual themes we worked on –livelihoods, microfinance and the like. We have both known and admired Pramod Kulkarni’s work from a safe distance over the years. Every now and then he raised the topic of a book to present Sathi’s work. After a couple of years of looking around for the right experts to do it, we found ourselves plunging in.

The three of us met for a day at Hyderabad, looked at what we might do and tried to schedule our work. We agreed on the focus we would like to maintain- the book will be about the issue and not about Sathi the organisation or its founder! Pramod is in any case the last person to want such a book to focus on him, so this approach suited all of us. We were determined that the book should speak through the stories of children Sathi has met over the years, not merely numbers and statistics. It must present the full spectrum of perspectives and opinions on the issue – both within and outside India, leaving it to the readers to judge.

Based on our earlier experience of working together, we began with a list of chapters and chapter outlines around mid-2011. It was at this stage that Mahalakshmi Sundarraman came in to help us. She helped us, beginning with the research and the writing, and going on to the language editing and the last minute corrections after the publisher’s copy-editing.

Sathi organised field trips for us to get our own feel of their realities. This proved to be enlightening, as we met children their families, Sathi staff, the core team, advisors and donor representatives. We also visited a number of children’s institutions, the traditional option for so-called homeless children; their staff do their best, in NGO and government run homes, but it seemed clear to us that whenever possible ‘home is best’. We met external stakeholders like Police Officers, Railway authorities, and key individuals from other NGOs working across India on this theme. We met people who argued quite fiercely that children who have chosen to live on railway platforms should not be prevented from doing so; that is their choice, and an NGOs’ job is to make their chosen lifestyle less dangerous. Others argued that a well-managed institution is much better than an unhappy poverty-stricken home; we realised there are many approaches, each worthy of emulation. Savita Sastri, then in Sathi, accompanied us on our wanderings within and around Bangalore. Manoj Kumar accompanied us in Poona and Thane, and Diku Nath in Delhi. Kate Bulman contributed a chapter on the system in the U K which provides a counterpoint to our narrative of what obtains in India, and an anonymous friend of hers described what it is like to be a ‘child in care’ in the UK.

We were quite astonished when we actually completed a reasonable manuscript on time –we had committed to deliver our manuscript to Sage our publishers by March 2012 and it went to them in early April. Going by subsequent developments I now suspect it was a bit of a shock for them too! The next big surprise was the very enthusiastic external review. No major rewrite was needed! This was in November 2012 and it took Sage nearly a year to get the book out after that.

Our key challenge has been to present the many different perspectives and keep the children’s experiences in the forefront. At times we were doing a Dickensian saga and a ‘white paper’ on the theme simultaneously. We had to overcome our scruples about text boxes- Malcolm’s view being that they were the last resort of authors who didn’t know how to build their argument! I know Malcolm found my Indianisms a bit of a challenge. I toned down some his more provocative comments out of concern that Sathi should not make enemies because of the book. We did enjoy writing together –and who knows we may find another interesting topic to try it again!

Malcolm Harper is currently an independent consultant. He was educated at Oxford, Harvard and Nairobi Universities. He first worked in marketing in England, and then taught at the University of Nairobi. He was Professor of Enterprise Development at Cranfield School of Management, and since 1995 he has worked independently, mainly in India. His work has in general focused on the application of business management tools to the alleviation of poverty, and he has published extensively on enterprise development, micro-finance and inclusive livelihoods.

He was Chairman of Basix Finance in India for 10 years, and is Chairman of M-CRIL, the international microfinance and social rating company. He is chair, trustee and board member of a number of institutions in the United Kingdom, the Netherlands, the United States and India, and has worked on poverty issues in Bangladesh and Pakistan, and in parts of Africa, Latin America etc.

Lalitha Iyer is currently an independent researcher and social consultant. She began her career in the banking sector, joining SBI as an officer in 1976. She left SBI in 1998 to head Vidyaranya, a leading school in Hyderabad. Since 2001 she has been a researcher and consultant in the social development sector. She has been a board member in the Basix Livelihoods group across India, and is now the Chairperson of Sathi.