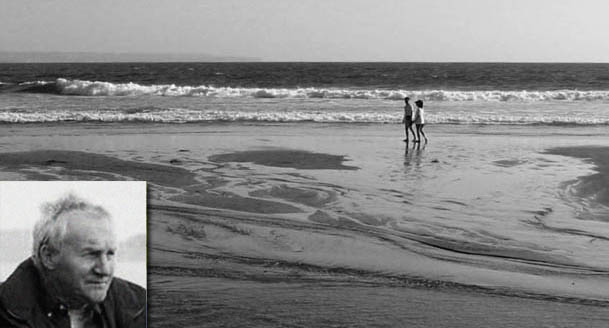 My poem refers to the past and to the present: emigration is sadly an ongoing feature of Irish life. The recent recession has taken a lot of young people to Australia and Canada as well as USA and England.

Because of recent workshops I was doing on Clare Island – off the County Mayo coast, I was confronted with the perils of the Atlantic and the fact that a lot of youth is being drained from the countryside…hence my poem. Perhaps I am trying to make the point that life along the seashore is not always as glamorous as is sometimes portrayed. Factory ships ‘clean’ the seas of fish and small family boats have to work so much harder to make a living.

Emigration has always been a feature of Irish life and I’m not really sure if it is always economic or, simply, the fact that there is a tradition of ‘leaving’ the island. We have lots of songs and tears-in-the-beer about the plight of those having to live in exile.

Some people are short of cash; quite a few have emigrated and some have lost a lot in the recession, but when I think of real poverty and hunger there is no comparison.

In a recession there is a spiritual poverty; a feeling of helplessness; even despair…it’s a feeling of loss of access to ‘things’, not having ‘things’.

There are voices that are saying we needed a wakeup call…we had strayed from reality in the Celtic Tiger years. This is true and my poem is true as well. Lots of little shops, pubs and small businesses have had to close in the villages in rural Ireland.

I feel things are beginning to change, especially in Dublin…I hope for the better and not to return to the madness of the Celtic Tiger.

Some never left. They didn’t
need to. They cut and saved
turf, did the hay, stacked oats
and barley and let sheep up
and down the hills.

Sheep were free in summer
and people knew enough of
the world to want to stay at home.

When sons and fathers went
fishing, mothers prayed
behind rocks in the screaming wind.
They could tell of wind changing
by the flight of gulls.

A fisherman’s wife looked hard
at her husband and sons, for
she never knew what way
the sea would bring them home.