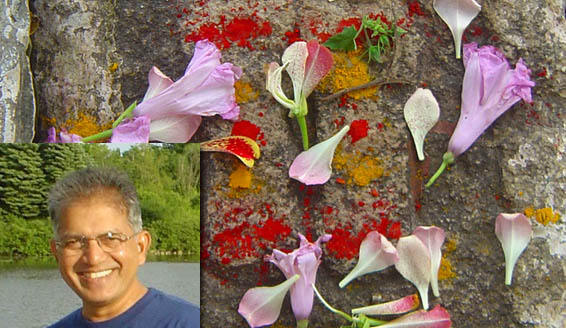 I must say that I have flirted with the idea of ‘spiritual and not religious.’ In a sense, it was impossible not to flirt with the idea, given that our backdoor neighbor was Bhagavan Shree Rajneesh, later Osho, in Koregaon Park, Pune, and that Tony De Mello was very much alive and active in those years (the eighties of the last century), and that I actually did a paper on Krishnamurti for the master’s in philosophy at Jnana Deepa Vidyapeeth, Pune. A number of Salesian priests were reading these things in those years, and there was this kind of atmosphere among the priests and young seminarians, with plenty of exciting insights and sharing, and of course passionate debates and high emotion. Even apart from his sexual shenanigans, Rajneesh was exciting.

The one time we obtained permission from the seminary director to attend one of his talks was quite memorable: he was certainly a marvelous and even hypnotic speaker. When the whole set up of the Ashram was being dismantled, and Rajneesh’s huge personal library was put up for sale, I picked up a large number of his books at throwaway prices. Rajneesh was convincing, and was a great communicator and writer. Some of the things he said still stick in my mind. And then there was Krishnamurti, with his challenging of all received traditions as betrayals of the path to Truth. Rajneesh of course used to laugh at Krishnamurti: “Krishnamurti is Rajneesh without a body,” he would say, and was not far from the truth. Both were pure New Age phenomena, each one attractive in his own right.

When I began teaching philosophy as a young priest, I ran a seminar on Krishnamurti’s idea of education. The experience was electrifying. Imagine reading Krishnamurti deeply in a Catholic seminary. Some of the young seminarians took matters to their logical conclusion: they wanted to stop attending Mass, reciting the Breviary, and so on. My job was to help them be consistent. I remember telling one of them: you are free to believe what you wish; but be totally consistent. Being totally consistent meant making the radical choice: leaving the seminary. I myself had gotten into a tight spot with all my reading of Rajneesh, Krishnamurti and Tony De Mello. Be free, all of them were telling me. So I did become free: my freedom consisted in deciding not to follow them.

Since then I have been trying to find my way (back) into Catholicism, and I believe, by God’s grace, that the way has been opened to me, though there is certainly far that I have still to go. And here I am, reflecting on the interface between spirituality and religion. Can one be spiritual without being religious, without subscribing to any religion? Surely there are people like this.

Very recently one of my good friends, a nun, was speaking to me about her brother, and said exactly the same thing: he is not religious, but he is certainly spiritual. I understood what she was trying to tell me. We have all of us come across that kind of person: a good person, one in whom a Catholic like me might say are manifested the fruits of the Spirit – love, joy, peace, patience, kindness, goodness, gentleness, self-control (see Galatians 5:22) – but does not subscribe to any religion, and is not a church-goer. So yes, one can well be spiritual without being religious – just as one can also be religious without being spiritual.

Once again all of us have come across people who are daily church-goers, but who on the other hand can be nasty, mean-spirited, quite narrow in their outlooks, and even bigoted and hate-filled. Religion is not just a matter of fulfilling certain external obligations, or meeting certain requirements – though I would not also subscribe to the idea that the four C’s – creeds, codes, cults and community – are merely the shabby external shell of religion, the real and vital core being religious experience. I think religion is an intricate weaving of inner and outer.

Theologians who tend to advocate pure forms of spirituality, downplaying the externals as superficial and superfluous, are probably going in the direction of an angelicism which does poor justice to our incarnate selves. We do after all celebrate our birthdays, and give gifts, and engage in a thousand little ceremonies and rituals. These are not merely ‘externals’. The human being is a symbolic animal, meaning is constitutive of us, and cannot not be incarnate in rituals, symbols, words, gestures and a thousand other things

So my personal choice is to be spiritual by being religious, and that too in a tradition and a religion that takes the word very seriously indeed, to the point of holding that God has made use of human words to communicate to us, and that in the end he has made the unfathomable choice to form part of the human history of which he is creator. But that does not mean that I would rule out of court the possibility of good people who are spiritual while not being religious.

I have too many friends of this kind, and too much respect for them to do that. I probably believe deep down that they are missing something, that their position is not in the ultimate analysis totally consistent, but this is something I would have to work out better and more profoundly. I say this because in the last week I have been grappling with John Milbank’s “The Midwinter Sacrifice.” John Milbank is, with Tony De Mello and Graham Ward, the originator of a new trend in Christian theology called Radical Orthodoxy.

Milbank and his friends work from within the Anglican tradition, their work finds a place in anthologies of postmodern theology (see, for example, The Blackwell Companion to Postmodern Theology), but they constitute quite a particular variety of such theology, going back to find support in a re-reading of Thomas Aquinas and Plato, and forward to find their questions and sparring partners in people like Jan Patocka, Jacques Derrida, Emmanuel Levinas and Jean-Luc Marion. Milbank’s capacity for expression can be described as penetrating and pungent, with an ability to state the most intricate arguments with enviable clarity and verve.

In the piece just mentioned, for example, he deliberately opposes a recent consensus “which would try to understand the ethical as primarily self-sacrifice for the other, without any necessary ‘return’ issuing from the other back to oneself,”  proposing in its place the daring thesis that it is not possible to be truly ethical without believing in the resurrection. I know this will sound outrageous, and I am still trying to get to grips with his argument.

I mention it only to say, first, that, despite Milbank, I am still convinced one can be ethical without being Christian or even religious, but that, in the second place, Milbank makes me pause and ask: is the idea of a secularized ethics totally consistent with itself in the final analysis? For an analogous question could be asked w.r.t. spirituality and religion. I believe, as I have been saying again and again, that it is possible to be spiritual without being religious; but I am not convinced that the idea of spirituality without religion is, in the final analysis, totally consistent.

As my friend Bernard Lonergan would say, conversion (read religious experience) is not so personal as to be solitary, that we each one of us needs all the help we can get not only to help us grow and keep growing, but even, in the first place, to recognize and name the experience for what it is. The alternative is probably rooted in the now much-maligned Cartesian isolated subjectivity, and in the atomic individualism which was one of the marks of modernity.

But, someone might say, granted, the externals of religion, especially the religious community, are needed; might they not be cast away, like the ladder after one has climbed to the top, like the boat once one has reached the other shore? And here I go back to an argument I have probably rehearsed before. There are certainly religions and religious traditions which not only contemplate but even advocate such letting go, but there are also those which will not and cannot, for the possibility that God has spoken and entered into the world mediated and constituted by meaning is itself constitutive of such traditions and even central to them. Should one rule such possibilities out of court? Can one rule them out? These are questions that I have been asking myself, and I am not sure I can answer them quite simply in the affirmative.

So I remain fascinated to this day by my friends Rajneesh, Krishnamurti and Tony De Mello, while at the same time finding myself a quite conservative Catholic Christian. Maybe some day I will find the time and the leisure, or take the trouble to see how all this might still flow together in some way. For surely there are great kernels of truth in each, and surely we can be friends even if we do not in the end agree on everything.