WARNING GRAPHIC IMAGES – These are shocking images of Christian men, women and children slaughtered by ISIS – the Sunni Islamic movement that aspires to take over the entire Middle East. Pope Francis has appealed to the UN to no avail. Along with the Christians other minorities (Yizdis, Kurds, Shias) are being murdered. The world media appears to be more concerned about Palestinians and the murderous Hamas and the boycotting of Israel than about the Christians of Iraq.

I am sorry for these graphic images of Kurd children executed, Christians crucified, Christian women’s throats slit and Christian children being beheaded. It is necessary to show the truth.

Sadly…
No one will walk the streets of western nations protesting these horrible acts committed by Islamists.
No one will cry for these wretched people.

Those who have a heart say a prayer tonight for the Christians and other minorities in Iraq.

LOS ANGELES, CA (Catholic Online) – “There is a park in Mosul,” Mark Arabo told CNN during a Skype interview from San Diego, “where they actually beheaded children and put their heads on a stick and have them in the park.”

Arabo, who is a prominent Chaldean-American businessman and met with other leaders of his community in the White House last week, has called upon American political leaders to grant asylum to about 300,000 Christians fleeing the ISIS invasion.

In the name of mercy, please give today to help these people.

“The world hasn’t seen this kind of atrocity in generations,” he told CNN. He’s mostly correct. Although genocides have happened repeatedly throughout history, including famous genocides in Rwanda and the former Yugoslavia, as well as Cambodia, the genocide perpetrated against Christians and other minorities is extreme, partly because it is being gleefully publicized.

The terrorists who have invaded Mosul and other ancient Christian communities in Syria and Iraq have made music videos of themselves murdering civilians and captured soldiers.  They are literally enjoying the act of killing and the fear and suffering experienced by others. This sadism may be the purest manifestation of evil witnessed since the Rape of Nanking during WWII.

Already, several images have emerged of Christian children beheaded by ISIS, merely for being Christian.

According to Arabo, women are being raped, then murdered, and men are being hanged. These are the people who were warned – convert to Islam of be put to the sword.

Even families that pay the tax, mandated by ISIS for Christians who remain, are now being victimized. The women are allegedly being taken from their husbands and made into “wives” belonging to the ISIS fighters. This means they can rape them and even kill them, if they do not subsequently agree to convert to Islam.

Not all Christians could flee, perhaps because they were caring for elderly relatives or small children or had some other reason they could not walk out of the city and trek across the desert. Perhaps some thought paying a tax would save them and their homes and businesses.

Still, in another part of Iraq, refugees retreated into the mountains where they have been surrounded by ISIS rebels who are now waiting for them to starve and die from exposure.

What is happening in Iraq and Syria, especially to Christians, is not hyperbole. The pledges of ISIS must be taken seriously. They have carried out every threat they have made. They have shown no mercy to children or their mothers. They revel in killing and are nothing more than an army of religious zealots and psychopaths. Their numbers are growing because nobody in the world is doing anything to stop them. Every murderous, blood-lusting Muslim who can reach the area is flocking to join ISIS and participate in the killing spree.

This is no longer an issue for Iraq alone to deal with. The entire planet has a solemn responsibility to deal swiftly with ISIS and to neutralize their threat to all civilized people.

That the world sits and watches is the epitome of shame and an indelible blight on humanity. 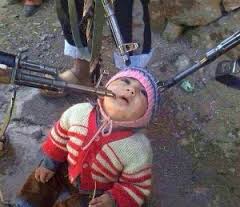 How can anyone turn away from a child, facing mortal terror? All Christian children in Mosul are reportedly being killed. 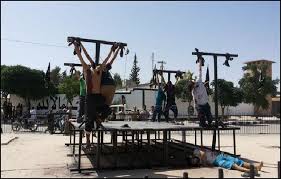 Convert or die. ISIS militants are crucifying victims because to them crucifixion is especially humiliating due to its Christian implications. 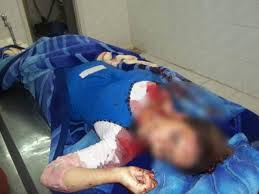 Another woman killed by militants. ISIS has pledged to exterminate Christians from the region. 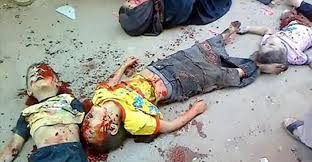 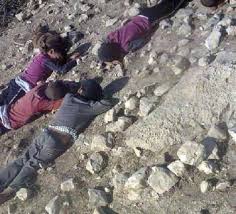 Children lie where they were killed by militants. 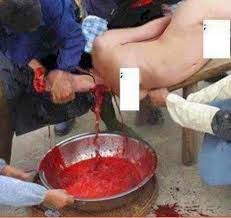 Islamists killing a woman by slitting her throat and capturing her blood in a bowl, holding her firm as her life literally drains from her neck. Such forms of execution are intended to intimidate others. 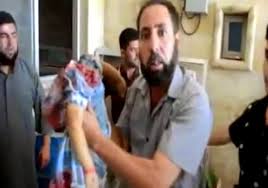 A distraught father in Syria holds the lifeless body of his decapitated daughter, executed by militants because she was of a Christian family. Allegedly, Christian children in Mosul are being systematically beheaded and their little heads placed on poles in a park as a warning to others who love their children.

Human Rights Office in Iraq reveals that ISIS have been burying hundreds of children and young people alive in Mosul. 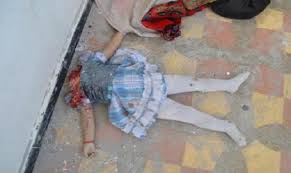 All humanity owes a debt to this baby girl, to find her murderers and bring them to justice, dead or alive. That the nations of the world and its citizens sit complacent is the greatest embarrassment to civilization and should be the source of deep shame to all. Everything less that we do is pales by comparison. We have a moral imperative to act.

So will these 400 British Muslims who have gone to fight along with ISIS return to convert their brothers in the UK? If so, will we see the persecution of Christians in Britain? How will this end? Any takers?

Read Also :  Jews speak up for Christians slaughtered in Middle East and Africa