A Cows and Bull Story, short story by Arthur Broomfield. 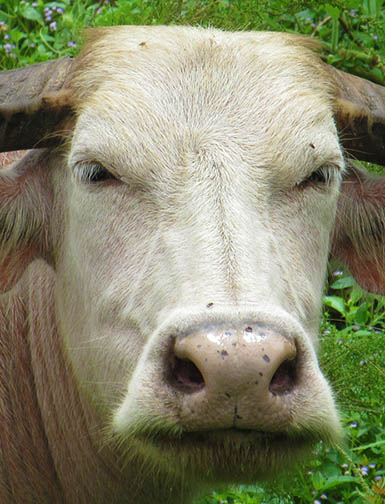 A Cows and Bull Story

It was after eleven on a starless, November night. My brother had gone out drinking and predictions of the hour of his return would be dependent on the company ‘he has fallen into,’ as my father put it.

‘I’m off to bed now, the oul pains is at me again, and keep well away from the bull, even if he is tied. He could break free at a time like this.’

I couldn’t repress the glow that warmed me. At barely sixteen my father had entrusted me with the delivery of a new calf to the herd. The cow in question was a Friesen, coming on seven, and one of our best milkers. My father had bought her from Mr McArdle, a calf jobber who called to us every spring. ‘She’s from a herd in the Golden Vale’. he said. ‘The husband died sudden and the wife sold out. I was lucky to get her.’ She’d not given trouble before. But there could always be a first time. What if the calf was coming backwards, or a front leg was held behind the head instead of beside it, or what if the calf was dead inside the cow? All these thoughts occupied my mind as I headed out to cross the yard, my torch vaguely scanning the place for a misplaced barrow, or galvanised bucket dropped by Jimmy in his hurry to get away for the night.

‘You’re sure to be in a rush when there’s porter to be drank,’ I had heard my father chastise him more than once.

Over my left shoulder, and running at right angles to it, a long, gothic style, row of sheds protected me from the ruins of the old castle in what we called the far yard.  The castle rose three stories high and if I looked I could see the top story rising out of the gloom of the shed’s grey slates.  But I never looked towards it, not at night, not since the day Paddy Moore jumped off the shed roof. That was in daylight. Well he slid at speed   more than jumped, right down the steep pitch from the apex, where he’d been pointing the roof tiles, till he ran out of slates and landed in the dung heap outside the calf house. My father always said he was a bit ‘touched’. Paddy swore he saw something moving in the castle. A kind of a light shaped like a human figure with no face to it, was how he described it. He was trembling all over, his face had turned whiter than skim milk. ‘I seen it boss, on my mother’s grave I seen the banshee.’

‘He’s seen something alright,’ my father said, after he sent Paddy into the kitchen for a mug of tea and a smoke, ‘otherwise he’d have come down the roof ladder.’

Earlier that year Johnny Smith had paved the yard with hard packed gravel and stones, it measured about twenty paces across. I knew this since the times we measured it out for football games. ‘Damn Ever Ready,’ I muttered as the torch began to flicker. Visions of the terror in Paddy Moore’s eyes made the yard a lot wider now. My boots felt like lead that had been purified through the Betts electrolytic process as I forced one foot forward, then the other, each movement a deliberate act of the will.  Something soft brush my leg. The blood drained from my head. ‘Tiger,’ I blurted out my relief, ‘what are you doing out in the cold?’ Better a cat than a rat. My right foot rattled against one of Jimmy’s abandoned buckets and sent it careering down the yard. It clattered against anything it met on its way, till the noise dropped to an eerie silence.

I sat the torch on a milk churn to the right of the cowhouse door, inside the barn where we stored cattle meal and turnips. I pushed my hand through a hand size hole in the door and fumbled till I found the switch. The light flickered, as usual. Too many times I’d heard my father tell my brother to ‘get that bloody light fixed or it’ll be the death of one of you yet.’ I continued to manipulate the switch till the two sixty-watt bulbs contested the gloom with partial success; under each bulb three or four cows, chained in their stalls, were clearly visible. The remaining fifteen and the bull chained in a stall to himself, resembled spooky figures at dusk; I knew them well, most of them having grown up with me but a stranger would have had difficulty in distinguishing one from the others. As fortune would have it the cow in question was tied into the beam under one of the bulbs. The light was just strong enough for me to assist in the delivery, should my help be necessary. I busied myself, putting plenty of clean straw behind the cow, and the calving jack and ropes against the wall beside me. All I could do now was wait for nature to take its course. I sat on an old milking stool and lit a cigarette.  I was wishing she’d hurry up, I wanted it to happen.

That was when the lights began to act up. Damn I thought that bloody switch again. I hurried up the eight or nine strides to the switch, thinking that a pat or tap would stabilize it. To my surprise the switch was so rock solid that I couldn’t move it any way, on or off. But the light continued to waver. That’s when the creepy crawlies started at the back of my neck and moved up along my head. The lights were dancing to a pronounced rhythm now, from gloomy overcast to uncanny sunny. Just as I reached the cow that I now wanted, with all my heart, to leave to the care of nature, a succession of sensations across my feet froze me to the concrete floor.

The light, agreeably, sparkled to sunny in time for me to see a stream of rats racing across my boots. They fled from the shed end that was nearest the castle, where my father had chained the bull, when he brought him in for the winter.

The cow began to moan.   She had become restless, lying down, and standing back up irregularly. I checked that her pins were fully down, as I had often seen my father do. Judging that they were, and she was on the point of calving, I opened the chain on her neck to give her freedom to settle during the delivery. Two white feet protruded from the cows bearing. All ok so far, I thought. Now for the real crisis, would the calf’s head be nestling snugly between its legs, as it should be, or would it be twisted backwards?  Christ how will I manage to calve her if it’s like that. I secured the ropes of the jack to the calf’s feet and waited. ‘Give her time,’ my father would always say in these situations. ‘Wait till she forces then pull gradually like but be firm about it at the same time.’ I waited for her to push. Still no sign of the calf’s head. Just as my impatience was about to get the better of me she lay down with an almighty groan. ‘Don’t use the jack, only if you have to,’ my father ordered, as I left the kitchen. She forced. The taut spring that was my body relaxed. There, announcing itself to the world was a black spotted, white snout perfectly placed for delivery. I took the gauze like tissue from its nose and felt for its head. A bit big, I thought, I’ll surely need the help.  I held the jack to her haunches and as she forced again, I ratcheted the jack a few cogs. And waited for her next push. We worked in unison, the cow and me. She half turned her head to look at me pleading, then pushed again. Our combined effort worked to perfection; with a mighty heave and a thunderous roar the calf’s head, quickly followed by a shining black body landed on the bed of straw behind its mother. A Hereford cross bull calf couldn’t be better. I got the cow up to her feet. She spotted her calf straight away and with much soothing lowing took to lick him as he struggled to find his feet.

I had almost got used to the flickering lights. But my sense of satisfaction was short-lived. A sharp sound, somewhere between a shriek and a wail, was followed by a total blackout. Christ what next! Paddy Moore’s Banshee! The torch! I steered my way back to the shed door, half afraid of what my hands might touch as I groped the wall for guidance. At least the torch was still there. It spluttered again when I switched it on. I hit it a few smacks. No improvement. That’s when I heard the roaring from the corner where the bull was chained. I thought of my father’s warning. And I thought of the calf. Beads of perspiration ran down my cheeks. Scarcely able to move one leg after the other I forced myself forward till the torch glimmered against what I knew must be the figure of the bull. But he looked different.

Maybe it’s the torch, I thought. As I got nearer I knew it wasn’t the torch. The bull was standing rigid. His back was humped, head down. I could see the chain that had held him was wrenched free of its moorings. I touched him with my hand. His flank was saturated with sweat. Wet but not like the pleasant feel of birth from the calf. His was stone cold. He made no attempt to move. It seemed as if we were united in fear of something unknown to us. That’s when I heard the wail again; closer this time, as if it was communicating with us, almost personal. The bull’s body started to tremble, slowly at first till whatever force was driving it built it up to a violent shuddering that infected all the animals in the cow house who looed and moaned. The momentum built up to a sound I never heard from an animal, before or since. It was something between extreme pain and unbearable grief. A sound that humans could relate to. That was his last act on this world. As he collapsed in a heap, dead, the lights came back on again, bright, and stable. The calf was now on its feet rummaging for its mother’s teat.

Dr Arthur Broomfield is a poet, short story writer and Beckett scholar from Laois, Ireland. His works and interviews have been published in Ireland, The United Kingdom, Serbia, India and the USA. He is current poet laurate for Mountmellick.

One Reply to “Arthur Broomfield – A Cows and Bull Story”