It’s autumn in Ireland. There’s a nip in the air. Growth along the lane leading up to our house has almost come to a halt. Everything is tucking in and covering up in preparation for the months ahead. Blackberries, raspberries and berries of all sorts have had their turn. It’s been a bumper harvest and we’ve had our fill. Meditation and a mild melancholy is in the air – it’s the different shades of colour that fascinates. If only I could paint! In the words of Dylan Thomas: oh easy for Leonardo.

About this time of year, my father would, often, sit at the kitchen table with his cup of tea and say things like, you know, I noticed an unusual shade of purple in the hedge over in the far field this morning…funny I’ve seen that now for the first time today. He didn’t say his words were special – that nature was his brother, but what he had to say, he said, without suggesting his words were poetry. For him it was all about rich, fleeting observations that fitted naturally into daily conversation as part of the enjoyment of a cup of tea after the jobs had been done. I’m sure those changing seasons and colours must have helped him run from melancholy and pounding moments that fell from the sky.

From high up on Lios Árd, next to our house, in Cill Aodáin, I can see deep into the Yeats County of Sligo and when I turn and face in the opposite direction to County Galway, I cannot see but I can close my eyes to really see the Swans at Coole in autumn. We have the poet’s words, The Wild Swans at Coole, to drink the purest of autumn air – to lean on words that cannot lie.

‘The trees are in their autumn beauty.
The woodland paths are dry.
Under the October twilight the water
Mirrors a still sky;
Upon the brimming water among the stones
Are nine-and-fifty swans.

I seem to be caught up in the slow music of poetry this Sunday morning. Some lines from Pablo Neruda’s beautiful poem, Keeping Quiet, seem so apt when time seems to tick and tick and what then! For once on the face of the earth/let’s not speak any language;/let’s stop for a second/and not move our arms so much/Perhaps the earth can teach us/when everything seems dead/it later proves to be alive.

Outside my window, the leaves on the chestnut tree are turning brown and I cannot change a thing. I wouldn’t want to.

In the deep fall
don’t you imagine the leaves think how
comfortable it will be to touch
the earth instead of the
nothingness of air and the endless
freshets of wind? And don’t you think
the trees themselves, especially those with mossy,
warm caves, begin to think
of the birds that will come — six, a dozen — to sleep
inside their bodies? And don’t you hear
the goldenrod whispering goodbye,
the everlasting being crowned with the first
tuffets of snow? The pond
vanishes, and the white field over which
the fox runs so quickly brings out
its blue shadows. And the wind pumps its
bellows. And at evening especially,
the piled firewood shifts a little,
longing to be on its way.

Autumn, autumn – and then there was Samhain. It came at us like a flood of fear and excitement cascading down a sparkling waterfall long before America and commerce got its hands on it. In my childhood, my mother would light candles and place them on windowsills to welcome the spirits of our dead ancestors. She would say, some spirits are lost and lonely tonight. It was a bit eerie and scary, but when you’re a child, eerie and scary are brilliant.

Of course, I didn’t know October 31st into November 1st was the ending of the old year and the beginning of the New Year. The spirits of the living and the dead wandered freely and walked the earth, mingling for a time, on this night into morning. The spirits became visible to each other because the barriers between the ‘other’ world and the living disappeared.

I didn’t know that was the central feast day in Ireland. I didn’t realize it was celebration of death and life – the New Year began on November the 1st. If a spirit came back to take revenge on a wrongdoing of the living, the living would dress up to confuse the avenging spirit and, thus, escape consequences. Fearsome faces were shaped into turnips as we walked from house to house trying to scare each other. We loved dressing up for fun, anyway – trying to play tricks on each other.

And there were games too: ducking for apples in a basin of water, without using hands; trying to bite an apple hanging from the ceiling, with your hands behind your back. The barnbrack was special. It was bread with added sultanas and raising – and including a ring. The one to get the slice with the ring would be married first. There was mumming too where people went from door to door singing and playing song to the dead in exchange for cake. Animals got an extra portion and food was left out for straying spirits. The whole event was lovely, simple and it stretched way back into ancient, pre-Christian times.

As with many other ancient traditions, the Christian churches began to adopt these old rituals and make them their own. Samhain became Halloween or All Hallows’ Eve – the evening before All Saints Day on November 1st and All Souls Day on November 2nd. The pre-Christian fires of celebration became the fires of those suffering in Purgatory, awaiting release.

The Irish emigrated to America and took their traditions with them. America gradually too over and the old Celtic festival of Samhain became what it is today – a commercial racket with little or no awareness of its ancient pagan roots – a time when nature, seasons, gods and goddesses were feared, elevated, worshipped and celebrated.

And now, in autumn, as we move closer to November, the woods and fields look more tattered and rattled – uncertain of what’s next. Some people still know that all living things are lining up for one of the most important feast days on nature’s calendar.

A short autumn poem, by Emily Bronte to completes my piece:

Fall, leaves, fall; die, flowers, away,
Lengthen night and shorten day;
Every leaf speaks bliss to me
Fluttering from the autumn tree.
I shall smile when wreaths of snow
Blossom where the rose should grow;
I shall sing when night’s decay
Ushers in a drearier day.

Autumn is a second spring when every leaf is a flower – Albert Camus. 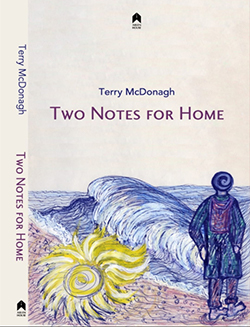 Terry McDonagh, Irish poet and dramatist has worked in Europe, Asia and Australia. He’s taught creative writing at Hamburg University and was Drama Director at Hamburg International School. Published eleven poetry collections, letters, drama, prose and poetry for young people. In March 2022, he was poet in residence and Grand Marshal as part of the Saint Patrick’s Day celebrations in Brussels. His work has been translated into German and Indonesian. His poem, ‘UCG by Degrees’ is included in the Galway Poetry Trail on Galway University campus. In 2020, Two Notes for Home – a two-part radio documentary, compiled and presented by Werner Lewon, on The Life and Work of Terry McDonagh, The Modern Bard of Cill Aodáin. His latest poetry collection, ‘Two Notes for Home’ – published by Arlen House – September 2022. He returned to live in County Mayo in 2019. www.terry-mcdonagh.com