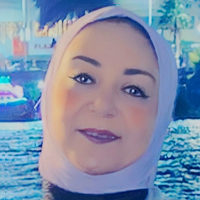 Translated from Arabic by Salwa Gouda.

Suppose you were not born,
You are not Ahmad,
And you are not a poet.

Suppose you didn’t see anyone in the sky,
All women were not the ones you love;
You are disgraced by vanity,
And the world is a comma in a semi-sentence.

Suppose that the shadow was not
Your enemy in childhood,
And there is a Jinn on earth
Who reads the names.

Suppose the road does not end,
And that night is not the brother of sorrow;
Suppose she did not come,
And did not drink water.
Your bed is a street of words,
And you are devastated by abandonment.

Suppose you never drank the light,
Darkness was a way to the sun,
The book you are carrying now
Has walked to its owner,
And became a bird with two heads.

What will you do with the heart at night
When drowning calls?
And what will you write
A few seconds before the end?

Dogs Pass Through My Fingers

Never ask again about the poem,
About me in the wind,
Nor about my image in the clouds.
Don’t ask me about my book
Because I closed the ink factories;
I sold the paper stores to the fire
To satisfy its hunger.

Don’t talk to me about dreams
That I raised in the bed of rest,
And when they grew up,
They denied me.
Nor about the boat which the fish
Chased in the Nile
Until rescued by a sleeping blue lily.
Nor about the dictionaries
That burdened me
And didn’t save my languages
From their doom.
Don’t talk to me about the shadows
Because I spent my life sitting
Under its trees,
To be as ascetic as my *sheikh
But I sold my illusions
To no one but me.

The sun has left its place in the house.
I was left with nothing but dust.
Even the mouse I thought
Run away from my cry,
Come back in a wolf’s guise.
He gnawed what was in the rooms for me.

I am the only traveler
Without food or luggage,
No name for me,
No passport,
No road beckons at night,
No meaning leads to a sentence
That starts and ends with me.
No wind gives the sea
The freedom to die.

Silence has become an insulating wall.
It prevents people from asking me
About the dogs that pass
Through my fingers,
The crows that fill the streets
And I don’t see them,
As if my eyes have lost their articulation,
And about Noah who didn’t come.

I only see my life as a sea
The fish drank its water,
And died of thirst.
Death sleeps in my bed
So that I didn’t get tired of calling.
It is closer than words that are not mine,
Than a vein devoid of my blood,
And music that climbs the walls
To be strong in the battle
Of ant armies in my brain.
I lost myself in battles;
I became a thousand people,
And I wondered which one am I?
I‘m afraid to live in my mask
It is ruthless,
And it gets hard at nights.

Why do frogs sleep in water?
And bats leave their homes to the trees?
I got out of the corners and angles,
Circles can no longer tolerate whispers,
Those which hate obsessions and vanishing.
It only knows the severity of points and lines.
I’m the one who went to solid geometry
To nurture the imagination of my head,
But it betrayed me.
And it spoke to strangers to rob me.
Every time I leave a letter
Unchecked here,
It kicked me,

Every time I leave a space
Between two lines here
The devil slept in it.
Whenever I forget a word
Without Points
It rained heavily.
And the sky thundered with surahs
“By the heaven, and At-Tariq
“When the earth is shaken
With its (final) earthquake….
From the holy Quran

I run in the streets,
It is as if I am on pilgrimage,
Circumambulating around my head.
No pilgrims behind
But strangers continue to occupy me.

*Sheikh is a venerable man in Arabic Islamic countries

Ahmad Al-Shahawy is an Egyptian poet and author of more than 20 books and poetry collections. His poems have been translated into many languages including French, Italian, English, Turkish and Spanish. He participated in many international poetry festivals organized in many countries of the world. Al-Shahawy was also the recipient of UNESCO literature award in 1995, and Cavafy Poetry award in 1998.His poetry collection “I DO NOT See Me” was nominated in the long list of the Sheikh Zayed Book Award in the branch of literature.

Translated from Arabic by Salwa Gouda.
Salwa Gouda is an Egyptian university staff member at The English Language and Literature Department in Ain-Shams University. She is a PhD holder in English literature and criticism. She received her education at Ain-Shams University and at California State University in San Bernardino. She has published many academic books including Lectures in English Poetry, Introduction to Modern Literary Criticism and others.