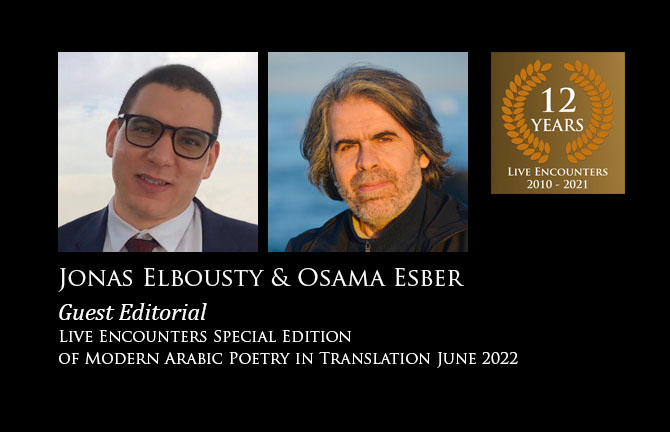 When Mark Ulyseas, the publisher/editor of Live Encounters, emailed us to work on a special English issue on modern Arabic poetry for his literary magazine, we were originally reluctant. One reason for our reluctance is that it is difficult to prepare a complete and representative issue of poetry in the Arab world in a short period of time. Furthermore, such a project requires a team of translators, which would be difficult to secure due to lack of funds. To overcome the challenge of translation, Mark proposed that we ask our featured poets to get their poems translated. Accordingly, we requested the poets featured in this issue either to translate their own work or have someone translate for them.

Throughout this process, Akram Alkatreb, a Syrian poet, exerted great efforts to connect us with many poets. Through his efforts, we were lucky enough to solicit submissions from prominent Arab poets from across the region. Thus, submissions include poets from Egypt, Syria, Iraq, Lebanon, Oman, Bahrain, Saudi Arabia, the United Arab Emirates, Morocco, Algeria, Tunisia, Palestine, and Jordan. This diversity is shown and reflected in this issue.

The poems featured here showcase the different writing styles and experiences of the poets from various Arab countries and show that each poet has his or her own way of using Arabic to convey their unique vision. Since nineteen fifty-seven, Arabic poetry has undergone a radical transformation marking the birth of the prose poem and the dethroning of the classical criteria for writing poetry.

These criteria restricted poets to the inherited forms of metrical and rhyme-schemed poems, constricting the freedom of poets to the usage of meters that fall within the fifteen different meters recorded by al-Khalīl ibn Aḥmad al-Farāhīdī (718 AD- 791 AD), an early Arab lexicographer and philologist. The year nineteen fifty-seven marked the launch of Shi’r (Poetry) magazine by Yūsuf al-Khal, Adonis, and a group of other prominent Arab poets in Beirut. The influence of the magazine on Arabic literature ignited a revolution against poetic restrictions and rules. Poets rejected the inherited tradition, creating their own forms, and adopting a new concept of writing that claims that poetic form should be born out of creativity, and there should be no mandatory models to imitate. Later, free verse and the prose poem dominated the scene, and Arab poets found themselves free to create their own, non-restricted, poems.

As the readers of these selections will notice, the topics of the poems are myriad. Some poems explore the poet’s inner world, while others probe the reality around them, including commitments to just causes and mention of political and social issues that sometimes bring the poems to the verge of protest. Other poets try to evoke the beauty of the places in which they live and speak of issues that human beings face, each in their own way. Other poets find value in opening their poems with philosophical questions about existence in order to help us discover the world anew. Still others focus their creativity on the rhythm of their poems, while others focus on their lost homeland as though their poems are an internal search for what cannot be attained, enjoying the imaginary, poetic trip without ever reaching their destination.

The special issue provides a platform to individual poets, whose work is featured. However, something should be said about translation, which can be defined, in this context, as a necessary evil. Translation makes the poetry more widely understood; however, it takes away from the original Arabic, which is a very rich language, whose rhythms and musical ways cannot be easily matched or conveyed in another language. Regardless, we can confidently say that this issue presents poets who are very active in the current poetic scene in the Arab world. Collectively, these poets belong to different generations, yet they believe that the poem is something born out of the magical fabric woven at the intersection of imagination and reality. This combination is achieved differently by each poet through his or her unique approach.

This issue also aims to penetrate cultural barriers by opening new doors to a region of the world that is often considered a “problematic other” in order to see it instead outside of stereotypes and through the noblest of creative arts: poetry.

In closure, we would like to express our gratitude to the poets and translators who have contributed their work to this issue. All of them firmly believe that poetry can cross boundaries and expand global connections in a way that digital culture cannot. The issue, which has generously been offered a home by Live Encounters, includes voices of poets who fathom a reality burdened by autocracy, prejudices, fanaticism, inequality, climate catastrophes, wars, and injustices. This issue is just the first step toward exploring a richer map of poets who struggle to have their work appreciated in this market-oriented age.

Jonas Elbousty holds an MPhil and PhD in English Studies from Columbia University. He has taught at Emory, Georgia Institute of Technology, Al Akhawayn, Columbia, and Yale. He is a writer, literary translator, and an academic. He is the (co) author of three books, and his work has appeared (or forthcoming) in Michigan Quarterly Review, ArabLit, ArabLit Quarterly, Asheville Poetry Review, Banipal, Prospectus, Sekka, Journal of North African Studies, International Journal of Middle East Studies, Middle Eastern Literatures, Comparative Literature, among other venues. His translation of Mohamed Choukri’s two short story collections, Flower Crazy and The Tent, is forthcoming from Yale University Press. Elbousty He has received many awards, including the Ordre des Palmes Académiques, A. Whitney Griswold Faculty Research Fund, and 2020 Poorvu Family Award for excellence in teaching at Yale University.

Osama Esber is a widely published Syrian author of poetry and short stories, as well as a major translator of English writings into Arabic. He currently lives in in the United States, where he arrived in 2012 as a visiting scholar at the University of Chicago. He is also an editor at the Arabic section in Jadaliyya and for the Arab Studies Institute’s Tadween Publishing house and a host of Status, Jadaliyya’s audio-visual podcast. His most recent collection of poetry is entitled And My Body Told Me, Dar Khutut wa Zilal, Amman, (2022).