Are the Enlightened Marathi Scribes ready to do battle with the dark forces of divisiveness?
by Mark Ulyseas. 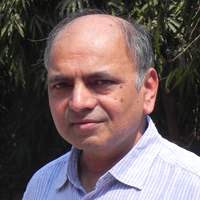 We are grateful to Professor Ganesh N Devy, a formidable intellectual and a supporter of Live Encounters, for introducing us to the renowned Marathi writer, Bharat Sasne. The professor is a thinker, cultural activist and an institution builder best known for the People’s Linguistic Survey of India and the Adivasi Academy created by him. He began the People Linguistic survey in 2010. It lasted for three years. The report resulted in a 50-volume series.

In his words, “When a language dies, something irreplaceable dies”.

And with this a prevailing culture loses another bejewelled facet.

Perhaps this is why he pointed us in the direction of Bharat Sasne, President of the All India Marathi Sahitya Sammelan – a prominent literary organisation, which is in its 95th year.

We have published his entire speech both in English and in the original language, Marathi. It is an important document that reflects the many changing hues of the Marathi literary field, the many cul-de-sacs encountered and the doors of perceptions opening to newer vistas of self-expression and perhaps, sometimes, a sense of indifference to people and events.

Marathi literature, I believe, has not really received the recognition it deserves both nationally, and internationally. It exists in the crowded linguistic sphere of Indian languages, each jostling for breathing space in the vast literary arena.

In the words of Sasne,

If the weakness of Marathi literature lies in neglecting the present, a poignant question that comes to the fore is, how far can Marathi literature reflect the significant happenings that have taken place generally in India and particularly in Maharashtra?”

He goes on to say, “We don’t find Marathi literature talking or discussing about the issue whether or not we are shaping up the Bharat that our Constitution has visualised. On the contrary, there is a talk going on in some corners about changing the Constitution. All these happenings have probably not been reflected in Marathi literature. Some of these subjects in literature are a matter of worry and we need to contemplate on them.”

“The author is looking at the widespread ridiculing of rationalists and intellectuals; it is an open contempt of rationalism. Someone is advocating the concept of ‘one country, one language, one book, one culture…The author smells a rat, a ‘method in madness’ in all this. But this is not just madness, it is also a deliberate instigative statement… Totally shocked, the listeners are trying to search for definition of culture. The author does not get involved in the confusion of definitions. He has clearly seen the hidden knife kept ready under the armpit.”

Sasne warns us that the cauldron brimming with politics of hate, religious intolerance and rising social injustice is being churned with deliberate intent to create a whey to entice all. He hopes that his contemporaries in the Marathi literary scene will come forward to form a formidable force through their literary outpourings to prevent the dismantling of society, a society that we know and cherish.

All is not lost as long as we have enlightened scribes like Bharat Sasne and
Professor Ganesh N Devy.

Mark Ulyseas has served time in advertising as copywriter and creative director selling people things they didn’t need, a ghost writer for some years, columnist of a newspaper, a freelance journalist and photographer.

He has edited, designed and produced all of Live Encounters’ 252 publications (till September 2022). Mark’s philosophy is that knowledge must be free and shared freely to empower all towards enlightenment. He is the author of three books: RAINY – My friend & Philosopher, Seductive Avatars of Maya – Anthology of Dystopian Lives and In Gethsemane: Transcripts of a Journey. https://liveencounters.net/mark-ulyseas/
https://www.amazon.com/Mark-Ulyseas/e/B01FUUQVBG