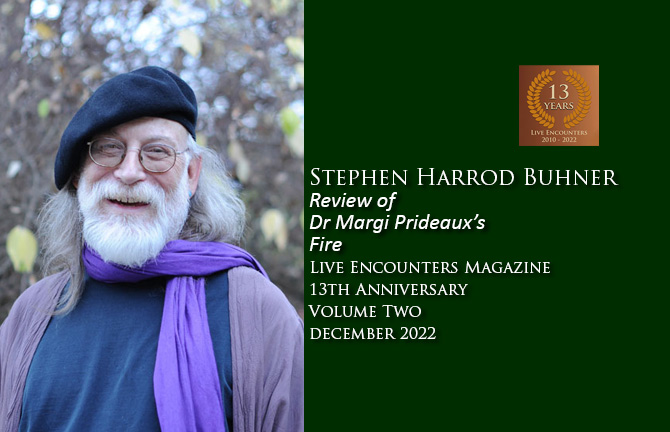 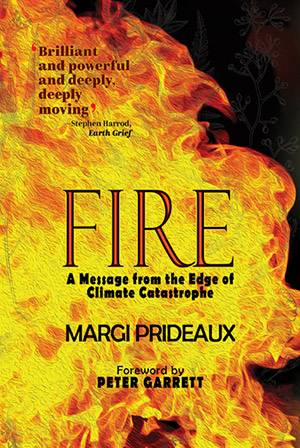 FIRE: A Message from the Edge of Climate Catastrophe should be on the bookshelf of every person who is concerned about climate change or who has felt ecological grief. Most especially it needs to be on the desk of everyone who is studying and writing about what we are facing. (Bill McKibben and Kim Stanley Robinson, pay attention.) It is an egregious failure on their part if it is not.

FIRE explores the real impacts of climate change on individual human beings and their community. In Prideaux’s stories and words you can both hear and feel the deep mourning and terrible grief that accompanies the reality of what we are facing. It comes like a hurricane, a tsunami, an avalanche – but one made of fire. And nothing, nothing at all can stand in the way of fire unchained; there is no technocratic fix for the great powers of Earth when they are freed to do as they wish. Unchained Air, Earth, Fire, and Water is what we are facing now. Their power, as media reports tell us every day, dwarf our own.

Make no mistake, Prideaux’s story is our story; it is a single instance of what the entire human species is facing. And it has at its core an emotional dimension that is nearly unbearable in its impact. It forces those of us who are caught on the front lines into an existential re-examination of our selves and our relation to a natural world teetering on the edge of complete collapse.

Unlike most articles and books on climate change Prideaux does not offer simplistic or techno-utopian solutions. Differently than so many she has turned her face to the truth, that climate change is already here, that tipping points have been passed, that there is nothing that can be done to stop what it happening. And from that she arrives at the core truth of what this means: we must adapt and we will have to do that on our own.

She is clear that this does not mean adaptation in the old sense of using the rational mind to exert control over nature but rather coming once again to accept that there are forces here far greater than ourselves, that it is the 4.5 billion year old life form we call Earth who makes the rules here, that we are ecological beings on an ecological planet, and from that, there is no escape. Our own climate of mind must change; that is the only way as a species that we can adapt and survive. In Prideaux’s story you will see what true adaptation involves.

I do not say these things lightly, I mean every word. Fire is brilliant and powerful and deeply, deeply moving. It is not a book I will easily forget. And I suspect that as the years of climate collapse roll on, I will think of and turn to it many times.

Stephen Harrod Buhner is an author, interdisciplinary and independent scholar, polymath, autodidact, Fellow of Schumacher College UK and head researcher for the Foundation for Gaian Studies for the past thirty years. stephenharrodbuhner.com