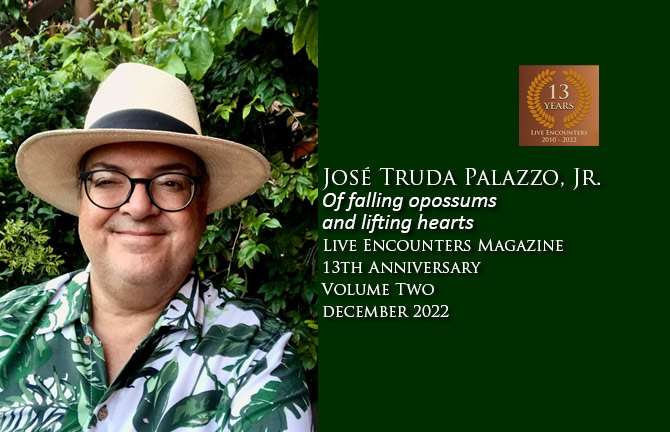 Of falling opossums and lifting hearts –
We Need Urban Wildlife to Reconnect with Nature – and Ourselves –
by José Truda Palazzo, Jr.

Nalu was listening to the faint calls all day long. At first she thought it was some kind of bird, but she couldn’t locate its source – only that it came from somewhere in our little backyard of the ground level apartment we rented in Praia do Forte, this little chunk of coastal paradise near Salvador de Bahia in Brazil where birds and trees are still many. When I arrived home from work, the calls were fainter but still there. But where was the caller?

After some time looking around, we located the source of the calls behind a desert rose pot. Shorter than my middle finger, thin and cold, and with her eyes still closed, but clinging to life with a moving tenacity, and still uttering those faint, poignant calls, was a baby female white-eared opossum. Most likely it somehow fell from the pouch of its mother who lived up in the building roof, and fortunately the soft earth of the plant pot buffered its fall. And we, astonished and unprepared humans, were left with a fragile life in our hands. What could we do to save that tiny creature without any previous knowledge of native marsupials and their rescue?

At that time, we had no idea, but the urge to save the baby opossum’s life would engulf us in a much wider quest that made us challenge federal authorities and almost ended in prison. But to begin with, we had to learn how to save baby Júlia (christened by our grandson João Pedro as soon as he learned about her). Resorting to this great Oracle, the internet, we found a Facebook group dedicated to rescuing opossums in Brazil and trying to educate people about them. To our big surprise, there were thousands of people following that group and at least hundreds of volunteers all over Brazil striving to rescue, rehabilitate and host these misunderstood animals. And misunderstood they are. Marsupials, not rats; harmless, not disease vectors; useful as avid consumers of venomous snakes, scorpions, ticks and cockroaches, not vermin to be exterminated. People simply have no idea about what opossums really are, and fear and hate are the most common responses to their presence. “Authorities”, that particular, frequently ignorant type of people, tend to replicate these unfounded feelings and either give no regard to the protection of opossums or worse, actively promote their persecution as happens in parts of the United States, where barbaric laws not only sanction their killing but also forbid volunteers from helping them. Here in our home country, our search for knowledge on how to nurture and care for our orphaned baby led us to learn also about the unspeakable cruelties these shy and beautiful “garden bears” suffer in the hands of thugs, including prolonged beatings and being set on fire alive.

The indifference and/or cruelty levelled against opossums across the Americas is a symptom of a much wider and rather insidious mental disease affecting billions of people around the world: a disconnect with Nature which makes so many among us fear, loathe or dismiss as nuisances all the remnants of the natural world that dare surviving in our presence. It might be the opossums or, more widely found, bats in our roofs, basements, or urban trees, or even the tiny harmless jumping spiders catching flies by our home windows: we know next to nothing about the lives of these wonderful adaptable creatures which defied our reign of destruction and encroached back upon our concrete deserts to create webs of life anew. Thanks to many of them, life in our cities is more bearable as they consume multitudes of harmful insects and other not-so-friendly, venomous, or disease-bearing species. But regardless of their usefulness to humans, the simple resilience that these species show by adapting to our cities should be reason enough to recognize that they have an intrinsic right to a safe, harmonious coexistence with us.

In fact, teaching our children to respect Nature not only by instilling appreciation for the grandeur of environments far away from our daily lives, but also by inspiring awe for the humble living beings of our immediate surroundings, might be the way to raise more environmentally responsible citizens with a sense of pertaining to this wondrous web of life. And there are many ways in which we can encourage and protect these interactions where we live, also involving our children in these activities. We can plant gardens with native plants which provide shelter and food for numerous wild animals, from native bees and other insects, little spiders, birds and synanthropic mammals. We can put out feeders with grain, fruit and (for the opossums and similar mammals) dog food. We can teach our family, friends, community about the importance of protecting urban wildlife. We can demand more green spaces with adequate native plant cover for wildlife, not only sterile manicured lawns and ecologically useless exotic species. We can reconnect – and be a part of the urban restoration of the miracle of life on Earth. There’s no better way to lift one’s heart that realizing we are all part of this wonderful symphony.

We can also make sure that urban wildlife in need is adequately assisted and rescued. This particular task comes with no small hurdles. You might recall that I mention earlier in this text that saving the two baby orphaned opossums almost landed us in prison. Well, although it is clear under Brazilian law that rescuing injured wildlife is no crime, some “authorities” still maintain that this is an exclusive duty of government-run rescue centers – which, as usual, are not only few and far between, but horrendously underfunded and understaffed, and many simply cannot care for small babies 24/7 for a prolonged period as we, volunteer rescuers, do in many countries.

I and my wife started a nationwide campaign to have volunteer rescuers recognized, proposing specific new rules to prevent their harassment by ignorant enforcement agents. It didn’t take long for someone to feel jealous about our campaigning that could threaten their divine right to do nothing but retain all authority on the matter, and one sunny day the State Environmental Agency of Bahia State showed up at our doorstep with three heavily armed military police soldiers to try and abduct our rescued orphans, so they could be dumped by the road or taken to on an official “rescue center” where some 70% of all “rescued” opossums die, according to their own statistics (we weren’t home and a courageous front desk manager prevented them from invading our condo. These people never showed up again, didn’t any paperwork or tried to get in touch with us.

To this day we’re convinced it was an illegal attempt at harassing and embarrassing us so we would shut up). Many volunteers in different countries suffer the same persecution and harassment, and protecting them from abuse is paramount if we want injured urban wildlife to have a fighting chance.

As I write these lines, dusk settles around our little backyard, and the singing birds and quarrelling marmosets vacate the feeder for the opossums that will soon arrive with the night. In their little wooden boxes, our furry orphans wake up for another night of roaming the house, playing, feeding, and returning to a safe and cozy shelter afterwards, little lives that became so important for us that my wife decided to start a nationwide movement to educate about opossums and improve their protection. Their presence in our lives fill our hearts with joy, a feeling I rediscovered in the presence of these humble beings after so many decades fighting for conservation of other, faraway species. May you who read me now also be able to find joy in the small creatures that share our surroundings, and who only appeal to the most human of all our traits – kindness – to continue existing in peace.

José Truda Palazzo, Jr. is a Brazilian environmentalist, wildlife gardener and writer with a career spanning 44 years and 14 books published as author or co-author. He served for almost two decades in government delegations to international conservation treaties and is a co-founder of many conservation organizations around Brazil and South America. A member of the IUCN (World Conservation Union) Task Force on Marine Mammals and Protected Areas and its Tourism and Protected Areas Specialist Group, a Life Member of the Australian Conservation Foundation, and a Board Member of the Brazilian Humpback Whale Institute, he also serves as Senior Conservation Officer for IBRACON, the Brazilian Institute for Nature Conservation. His next book, Living Water: Marine Ecotourism, Communities and Conservation will be published in early 2023 by Australian publishing house Stormbird Press. More about his work and writings at www.josetruda.wordpress.com. E-mail: josepalazzo@gmail.com

One Reply to “José Truda Palazzo, Jr.
Of falling opossums and lifting hearts”