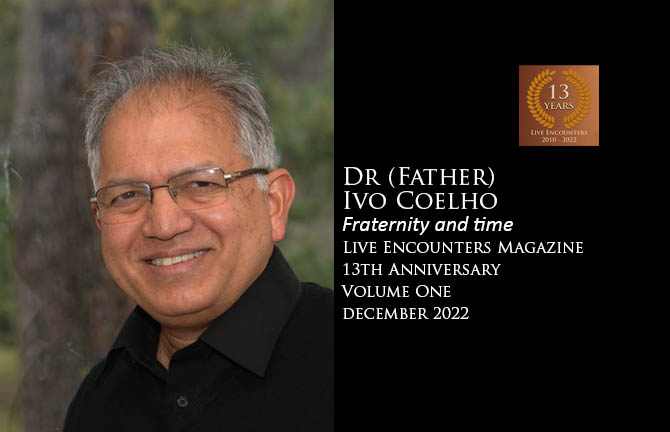 “Hatred is pure excitement, but fraternity involves time, even the time of boredom.” This was one of the many comments on Pope Francis’ extraordinary letter Fratelli Tutti (FT) on fraternity and social friendship.

Meditations on human fraternity are not, of course, new. What is remarkable is that they are coming from someone who is the head of the Catholic Church, in an effort to reach out to people of all religions and of no religion at all.

A statement on fraternity was needed. Believers run the temptation of thinking that the brother and the sister one is called to love and care for are the ones who belong to our club, our faith, or the visible boundaries of one’s religion. In his letter, Pope Francis blasts open this caricature of Christianity. In doing so he upholds the full consequence of the ‘Our Father’ that Christians recite every day and even several times a day: if God is our Father, we are all brothers and sisters, members of one family.

Fratelli Tutti affirms this perspective in unambiguous terms: we are brothers and sisters, all of us, across the globe, and we are all of us called to be friends. The question, therefore, is not “Who is my brother?” but rather “Whose brother can I be?”

Let me concentrate on something that I find new and exciting in these meditations of Pope Francis: the way he links the construction of fraternity with time.

But first a word on the strange expression, social friendship. Francis never defines the term, but I imagine that social friendship, like fraternity, is universal: it goes beyond one-to-one friendships to embrace everyone. “Our love for others, for who they are, moves us to seek the best for their lives. Only by cultivating this way of relating to one another will we make possible a social friendship that excludes no one and a fraternity that is open to all.” (FT 94)

Social friendship, Francis insists, is not the work of “professional and media resources” or of one part of society. The active agent of the culture of encounter is the people. (FT 216) And social peace is not achieved by recourse only to the pure and untainted, since “even people who can be considered questionable on account of their errors have something to offer which must not be overlooked”. (FT 217)

The important thing is to create processes of encounter. (FT 217) Time is greater than space. Francis is convinced that it is more important to begin processes than to dominate spaces.

One of the processes recommended by the pope is dialogue: “Let us arm our children with the weapons of dialogue! Let us teach them to fight the good fight of the culture of encounter!” (FT 217)

Dialogue is not merely an interpersonal affair. In Evangelii Gaudium (EG), Francis distinguishes three types of dialogue: “For the Church today, three areas of dialogue stand out where she needs to be present in order to promote full human development and to pursue the common good: dialogue with states, dialogue with society – including dialogue with cultures and the sciences – and dialogue with other believers who are not part of the Catholic Church.” (EG 238)

Whether interpersonal or social, dialogue always calls for patience, respect and a willingness to listen, rather than haste or judgment. “Authentic social dialogue involves the ability to respect the other’s point of view and to admit that it may include legitimate convictions and concerns.” (FT 203)

Dialogue is intrinsically related, therefore, to time and to patience. “Reaching a level of maturity where individuals can make truly free and responsible decisions calls for much time and patience.” (EG 171)

We have to be ready to dialogue with everyone. Social peace is not achieved by recourse only to the pure and untainted, since “even people who can be considered questionable on account of their errors have something to offer which must not be overlooked.” (FT 217)

It is a romantic illusion to assume that fraternity overlooks the very real fissures, divisions, problems and hatreds that are part of human history. All these are very real, and it is precisely in this world that we are invited to believe in fraternity and regard everyone as brothers and sisters. The construction of fraternity does not happen without the asceticism of patience.

Interestingly, Francis offers also some considerations on consensus and truth that might seem contradictory but are in fact essential to the construction of fraternity and social friendship.

Authentic social dialogue involves the ability to respect the point of view of the other and to admit that it may include legitimate convictions and concerns. (FT 203) “Public discussion, if it truly makes room for everyone and does not manipulate or conceal information, is a constant stimulus to a better grasp of the truth, or at least its more effective expression.” Differences, Francis affirms, are creative: “they create tension and in the resolution of tension lies humanity’s progress.” (FT 203)

Francis is not, however, advocating relativism. “Under the guise of tolerance, relativism ultimately leaves the interpretation of moral values to those in power. Neither political efforts nor the force of law would be sufficient in the absence of objective truths and values.” (FT 206) One such objective truth is the sacredness, inviolability and dignity of every human being. (FT 207, 213)

The pope is convinced that “the human mind is capable of transcending immediate concerns and grasping certain truths that are unchanging” (FT 208), that it is possible “to arrive at certain fundamental truths always to be upheld” (FT 211), that there is “an enduring truth accessible to the intellect.” (FT 212) “Inherent in the nature of human beings and society there exist certain basic structures to support our development and survival.”

These can be discovered through dialogue, even though, strictly speaking, they are not created by consensus. “There is no need, then, to oppose the interests of society, consensus and the reality of objective truth. These three realities can be harmonized whenever, through dialogue, people are unafraid to get to the heart of an issue.” (FT 212)

If Francis can bat both for enduring truths and the way of dialogue, it is because it is possible to distinguish between truth as defined and the way to arrive at truth. With Francis, then, we can speak of enduring truths and of basic structures in the human being that are transcultural (asking questions, trying to understand, weighing evidence for judgments, and so on), and also about how we in fact arrive at truth (precisely through the exercise of the transcultural constants, through experiencing, understanding, judging…). One of the exercises of the transcultural constants is, in fact, dialogue.

Dialogue is consequent upon the fact that human beings are a species. Human social aggregations of one kind or another are, in fact, as primordial as the transcendental structures. There is a fundamental collaboration in knowing and in doing that is part of being human. That is why Francis can both affirm enduring truths and say that they can be discovered through dialogue, even though they are not created by consensus. That is why he can conclude: “There is no need, then, to oppose the interests of society, consensus and the reality of objective truth. These three realities can be harmonized whenever, through dialogue, people are unafraid to get to the heart of an issue.” (FT 212)

Thomas Aquinas had pointed out that human intellect progresses from potency to perfect act (perfect science from every viewpoint) through a series of incomplete acts, and philosopher and theologian Bernard Lonergan draws the consequence that the progress of human intellect “is to be predicated not of the individual but of humanity.” Gandhi would have felt very much at home with this.

The great apostle of non-violence held that we need to stand for the truth as we see it, but we also know that we do not possess the whole truth, and so the political (and personal) method that imposes itself is that of non-violent satyagraha, the holding-on-to-the-truth without hitting the other person on the head, even to the extent of being willing to suffer violence at that other person’s hands, trusting that such willingness will eventually awaken the elements of humanity that lie, often obscured, in the depths of his or her being.

In the perspective of universal fraternity, the culture of encounter is inevitable, and, as Francis points out, differences are creative and enriching. (FT 203)

Universal fraternity is a fact, and it is also a task. Hatred is exciting, it sets the adrenalin flowing. Building fraternity, instead, takes time. It calls for kindness and for much patience. For time is greater than space. Francis encourages us to let go of our need to control spaces and to concentrate instead on initiating good processes. Dialogue is one such process, and it calls for much patience and even ‘the time of boredom.’ Convinced that we are all brothers and sisters, Francis invites all to join in his song to human fraternity.

Dr. (Father) Ivo Coelho is a Catholic priest belonging to the Salesian Society of Don Bosco. He was born in Mumbai in 1958 and did his early schooling in Mumbai and Lonavla. He studied under the Indologist Richard De Smet at Jnana Deepa, Pune, and later specialized in the hermeneutical thought of the Canadian philosopher, theologian and economist Bernard Lonergan, earning a PhD in philosophy at the Gregorian University, Rome, for his work on “The Development of the Notion of the Universal Viewpoint in Bernard Lonergan: From Insight to Method in Theology” (1994).

He has been principal of Divyadaan: Salesian Institute of Philosophy (1988-90) and Reader in Gnoseology and Metaphysics. He was also Rector at Divyadaan (1994-2002), secretary of the Association of Christian Philosophers of India (2000-02), and provincial of the Mumbai province of the Salesians of Don Bosco (2002-08). Since 2014 he is based in Rome where he is in charge of the training and formation sector of the Salesians of Don Bosco.