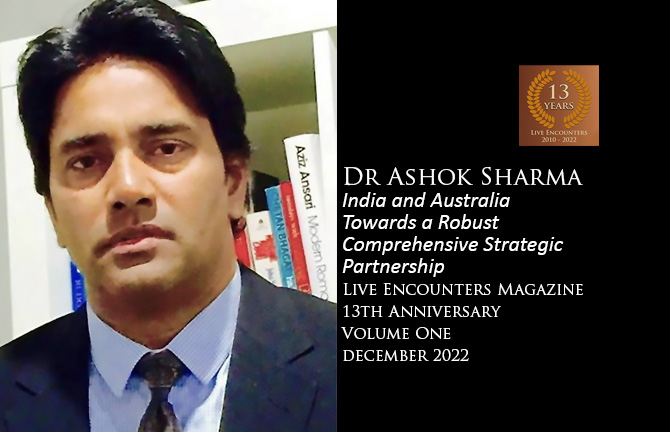 India and Australia Towards a Robust Comprehensive Strategic Partnership
in the Indo-Pacific by Dr Ashok Sharma. 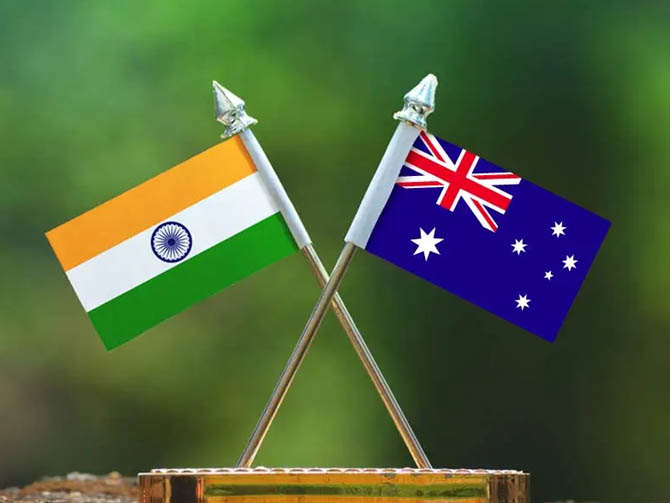 India and Australia are witnessing an all time high relations with extraordinary pace.  Though both nations have been forging their ties for more than a decade and a half, the pace has not been to the extent the way it has accelerated during the COVID-19 outbreak. This has resulted in the signing of agreements between India and Australia and finally, is moving at a pace that both nations off-late have been trying to achieve. This is mainly seen in the context of many synergies that both countries have, but what has accelerated the India-Australia relationship are the geo-economic and geostrategic factors amidst the unfolding geopolitics for the dominance of the Indo-Pacific, which is primarily driven by an assertive and powerful China.

Consequently, the converging strategic interests in the Indo-Pacific have enabled both India and Australia to build trust and confidence through high profile ministers’ visits and summit meetings, enhance their economic and defence ties, and set the relationship towards  a robust India-Australia Comprehensive Strategic Partnership (CSP).

India and Australia Towards  a Comprehensive Strategic Partnership:

India past, India and Australia struggled to forge a substantial strategic ties despite the two countries sharing many similarities. The narratives of Cricket, Commonwealth, and Curry were central to the relationship for a prolonged time. The relationship was mainly limited to the economic sphere, which was primarily sustained by exports of minerals and other natural resources, as well as by tourism and education. Additionally, the momentum of the relationship between Australia and India was impeded by India’s non-signatory status to the Nuclear Non-Proliferation Treaty and the Australian government’s inconsistent stance on the sale of uranium to India. Since it began in 2011, the Adani Carmichael coal mining project,  crucial to India’s future energy needs, encountered fierce opposition in Australia, hindering  the momentum of Australia-India relations and not letting realise its full potential.

However, both sides continued their engagement to improve their ties. Since the signing of the Australia-India Civil Nuclear Agreement and Prime Minister Narendra Modi’s visit to Australia in 2014, both nations’ foreign policies have placed a priority on one another. Since then, both have steadily advanced diplomatically and politically, with a surge in the frequency of prominent ministers and officials visiting each other’s nations and summit-level conferences.

In order to boost bilateral trade, reduce reliance on China, and secure a strong global supply chain, India and Australia have been working to finalise the free trade agreement. Their economies’ commonalities and synergies, as well as their shared security objectives, serve as the driving forces behind this initiative. The India-Australia Economic Cooperation and Trade Agreement (IndAus ECTA), which was signed on April 2, 2022, took place during the outbreak. The deal, which has been dubbed a “watershed moment” in India-Australian relations, intends to strengthen the two countries’ economic ties.

According to the ECTA, both parties concurred to eliminate customs taxes on exports from each other’s nations. Per the agreement, 85% of Australian exports to India would be tariff-free, while 96% of Indian exports to Australia would be duty-free. Australian wines brought into India will now have MFN status, as decided. High-quality Australian wine that is duty-free may take some time to reach Indian consumers, though, as India has made a specific promise to lower the rate of customs taxes over ten years, based on the CIF value.

The Australian government has also eliminated duties gradually over a five-year period on a number of strategic imports coming from India, including steel products. For the purpose of preventing double taxation on offshore services, both governments have agreed to change their domestic legislation. In addition, it’s anticipated that the visa discussions would expand immigration and cross-border mobility, which might lengthen the time Indian professionals and students can stay in Australia on work-search visas.

Additionally, it is anticipated that the visa discussions will improve cross-border mobility and immigration, which may lengthen the period of stay for Indian students and professionals on work-search visas in Australia. Overall, the agreement promises to nearly treble trade, generate jobs in both countries—including one million jobs in India over the next five years—and strengthen economic connections by reducing border crossings between the two Indo-Pacific countries. In the next five years, the ECTA wants to boost bilateral commerce from $27 billion to $45–50 billion.

The ECTA, a significant advancement in free trade agreement negotiations, sends a strong message to the businesses of both countries that “one of the biggest doors” is now open and could leverage the huge potential of the two dynamic regional economies. With the signing of the ECTA within such a short period of time, India-Australian bilateral relations have taken a turn for the better. Growing mutual trust and confidence between the two countries is leading towards a strong Australia-India comprehensive strategic cooperation that benefits both democracies by leveraging the current strategic scenario.

The swift progress on ECTA was further emphasised by the second visit of Indian Foreign Minister S. Jaishankar on October 10, 2022.  During the Sixth Annual Foreign Ministers’ Framework Dialogue, crucial to achieving the goal of strengthening their economic connections, both the Australian and Indian foreign ministers, Penny Wong and S. Jaishankar emphasised  on promoting and developing economic ties, particularly through the Economic Cooperation and Trade Agreement (ECTA).

In a significant development to give a further boost to the Comprehensive Strategic Partnership, on September 10–12, India and Australia had their first 2+2 Ministerial Dialogue in New Delhi.  The 2+2 dialogue aims to institutionalise and enhance defence connections and coordination between pertinent Australian and Indian entities. The strategic alignment in the Indo-Pacific and the potential for cooperation in science, technology, and research and development are the driving forces behind Australia and India’s defence ties.

The economic consequences of this agreement are much broader, since it will strengthen defence commerce as well as create jobs. There is a huge opportunity for both countries to work together to maximize their potential in the defence industry sector. In the Indo-Pacific region, both countries are committed to maritime security, counter-piracy and counter-terrorism, disaster relief, and international norms and rules-based order. The 2 plus 2 format will facilitate the diplomatic process between Australia and India and clear up any misunderstandings that may hinder the relationship. Defence drills will be more frequent under the 2plus2 format, which will improve trust, coordination, and interoperability between the two forces.

The 2 plus 2 dialogue between India and Australia is critical.  India has this agreement with a few selected nations, notably the Quad nations of the US and Japan. Since the 1992 Malabar exercise, India and the United States have been doing Malabar exercise , with Japan joining in 2015. Australia has a security alliance with the US and Japan through the Trilateral Security Dialogue. India and Australia have yet to deepen their defence ties, though.  India has prized strategic autonomy and prefers to be a strategic partner rather than an ally, despite strengthening defence ties with friendly nations like the United States. As a result, both India and the other three members of the Quad must have confidence in one another. The India-Australia 2plus2 dialogue underpins the Quad, a strong Indo-Pacific strategy to deter China’s intentions to dominate the region.

Within a few months following the outbreak, China’s intention to use the worst humanitarian disaster in history for its own geopolitical ends, which were most obvious in the Indo-Pacific, became explicit. Despite being Australia’s and India’s largest trading partner, China has been unable to soothe their worries regarding Beijing’s aggressive and authoritarian push under the Xi Zinping administration. China’s posture has been the largest cause of concern for both India and Australia when it comes to the great game for dominance of the Indo-Pacific. The pace of relations between Australia and India has been further hastened by China’s brash display of its economic might and assertive military posture in the Indo-Pacific.  The border dispute between China and India resulted in a violent collision, and Australia’s relations with China on the diplomatic and commercial fronts have deteriorated to an all-time low.

Consequently, Prime Ministers Narendra Modi and Scott Morrison, on June 4, 2020, during the India-Australia Leaders’ Virtual Summit, upgraded the India-Australia relationship from the bilateral Strategic Partnership inked in 2009 to the Comprehensive Strategic Partnership. The emphasis was on creating a thriving, open, and stable post-COVID-19 world, therefore both parties reached agreements on a Mutual Logistics Support Arrangement and a Defence Science and Technology Arrangement in addition to coordinating responses to COVID-19. India and Australia  joined the Quad defence exercise in November 2020, as well as the first Quad summit with the US and Japan, where it was decided to go beyond just a military partnership and cooperate to address non-traditional security challenges, such as those brought on by the COVID-19 outbreak.

The regular summit-level meetings and high-profile visits have contributed to the development of mutual trust, understanding, and confidence between Australia and India at the top levels and aided to determine the direction of the CSP. The pace of India-Australian relations, which could be further determined by the frequency of interaction at the summit and ministerial level, including three prime ministerial virtual summit level meetings in a month in 2022, reflects the trust-building process. The relationship between the two countries is at an all-time high.

This occurred during the conflict between Russia and Ukraine, and its importance is highlighted by India’s conflicting stance on the Ukrainian situation at the conference of the Quad foreign ministers. India took  a neutral stance, abstained on nearly all UN resolutions criticising Russia’s action, and sought to find a peaceful settlement through negotiation. Despite India’s contrasting views on Russia, New Delhi and Canberra have adopted a practical stance and remain committed to strengthen the CSP.

Both nations’ involvement in the Indo-Pacific has widened. The resolve to fully implement the CSP, which is built on mutual trust and understanding, common interests, and shared democratic and rule-of-law norms, has been reiterated by both the summit level meetings and the visiting ministers amidst China’s push for dominance in the Indo-Pacific. These high profile engagements have been important in highlighting the significance of continuing to work towards their shared objective of developing an Indo-Pacific region that is open, free, prosperous, and governed by laws.