The son of a renowned Afghan poet, Khalilullah Khalili, Masood Khalili is the current ambassador of Afghanistan to Spain and former ambassador to many other countries. He is respected both in his country and internationally as an honest, patriotic, and elder statesman, as well as a political leader.

This article was published over four years ago in Live Encounters Magazine. We republish the article on the eve of the withdrawal of western military forces from Afghanistan. Perhaps there is a lesson for us all in the words of the author, Masood Khalili, a friend of the legendary Afghan Commander Ahmad Shah Massoud who was one of the fiercest fighters involved in the defeat of Soviet Army in 1989. – Editor

The only way a man can mobilize his people to stay in the fight against a super power is to be among them. So, by foot, donkey or horse, I would travel into Afghanistan to talk to my people, from the richest to the poorest, the wisest to the unwise, the oldest to the youngest, I would listen to their stories and they would listen to mine. Our common goal was to win the war against the invading Red Army and their Afghan Communist puppets in power in Kabul city. We were losing thousands of people every month but we believed that we would win the war.

In all my thirteen travels through the country, I had one thing always with me, and those were my three notebooks. One was for political things, the other was for all military stuff and the third I would write for my beloved wife, whom was waiting for me in Pakistan with my two sons and parents. The first two were important because I was the main political officer of my party who would travel the world to gain support from foreign governments but the third was closest to my heart. I would do my best to write as much as I could in this one.

One of my trips to the North of Afghanistan to see my good friend, the famous military commander, Ahmad shah Massoud, I had with me a yellow notebook, which my son picked up and decided to translate and make into Whispers of War. This old yellow notebook was written by me to my wife in 1986 and I still remember how sometimes I would write in it every half an hour even. I wrote to her of everything I experienced, saw, felt, and said, as well as the stories that the common people told me as I travelled through the very high and hard Hindu Kush Mountain range.

The things that I saw and the stories I were told were not easy on the heart and so I would write in my yellow notebook so I would gain some strength and my wife would also be able to understand the plight of our poor people. For example, the following story is so powerful on so many different levels.

My dear, leave last night’s story of our nightmares to one side and listen to this one that Commander Massoud told me himself.  It is the story of Commander Azmuddin who is one of his political intelligence officers.

The wife and only child of Commander Azmuddin had been internal refugees in Worsaj for a year.  After one year, Commander Azmuddin decides to go see them. With a lot of effort, he gets permission from Commander Massoud. He goes speedily along the way on foot, so all the quicker to have his family in his arms and to rain kisses on his child. After all, he has been counting every night for more than 360 nights to see his small family. With no telephone, no postman, no radio communication, and no way to even see a photo of them, it was a great day for him to have the chance to come home.  He was dreaming of seeing his baby take his first steps in front of him. He buys a simple toy for his boy and one or two gifts for his wife.

He reaches home. His young wife rushes to greet him. This is one of the happiest moments for all of them.   Sounds of welcome and joy fill the house. He runs happily to kiss his son. His wife is highly excited and has no words to express how she feels at the sight of her husband playing, kissing, and talking sweetly to their little boy.  The sky, the flowers, the trees, the grass, and all of nature seemed to be celebrating in her happiness.

They all go inside. She gets her husband’s combat rucksack to put it in a proper place in the next room. Commander Azmuddin shouts to her that he has put some simple gifts for the two of them in the rucksack. Their son frees himself from the embrace of his father and runs after his mother. The sounds of the little one’s excitement and of his mother’s laughter fill both rooms.

All of a sudden, her unlucky fingers hit a hand grenade in the rucksack.  By chance, the needle of the grenade is loose, her gentle touch pushes the needle out of its place, and, in an instant, it explodes.

Commander Azmuddin hears a loud explosion and runs to find what has happened.  He is horrified to find the bodies of his beloved wife and his sweet child smeared and soaked in blood.  Not an hour has gone by that the young wife who was eagerly waiting for him to come home, dies in the arms of her husband. His little son does not die but is severely injured.

Azmuddin, who had just lost his beloved wife, could not stay for more than one or two days with his injured son, mainly because he had lots of work to do back on the Saalang Highway. He left the house for the war with a weeping heart and no loving wife to greet him when he returns.

Just like this story, there are dozens more in Whispers of War. My son is already talking about translating another notebook of mine, where I travel through the South of the country in order to get to the city of Herat. That is also a great story as I tell my beloved wife about the culture of the South, as it is totally different than the people of the North that I have written in Whispers. I hope you enjoy reading this book enough to want to read our second installment.

Sadly, you can still hear similar stories in the Afghanistan of today. We are still fighting but a different enemy. We won the war against the Red Army but we lost peace.  Different Afghan warlords fought against one another for power and influence. Kabul City was destroyed by the hundreds of bombs per day by Hekmatyar and Dostum.  Both were being paid by the intelligence agency of Pakistan to keep pressure on Commander Masood to give up power.  They really destroyed the city and killed thousands of more people.  Pakistan was trying its best to have its own puppet in power. It believed and still believes it has the right to rule over Afghanistan.

On September 9th of 2001, I was sitting alongside Commander Massoud in a place called Khaja Bahawodeen, (Northern Afghanistan) when two Arabs posing as journalists, assassinated my friend, Commander Massoud and left me severely injured with over 700 pieces of Shrapnel in my body, loss of an eye in one ear and loss of site in one ear. It seemed as if Al-Qaeda, Taliban and the Pakistani ISI had their victory in hand but fate had something else planned. Two towers in America were attacked and America was out for revenge. Afghanistan had another lifeline.

Cut to the present and sadly, we still see war in Afghanistan, we still see refugees, poverty and the lack of security. The Taliban, Al-Qaeda and now there is even ISIS. The poor people of Afghanistan have still not seen the sweet taste of peace but just like I dreamed in the mountains of Afghanistan in 1986, some of those dreams are coming true, even though we are still fighting.

Over 5 million boys and girls are going to school. They look so beautiful in their little uniforms. Over 350,000 young men and women are members of the Afghan National Army.  We have the freest media in the region, we have universities popping up every year and we have a system of government in place, although highly corrupt, it is still a functioning executive, legislative and judiciary. Over the last 17 years, we have also had three presidential elections with peaceful transitions of power from the Karzai government to the Ghani National Unity government of today. 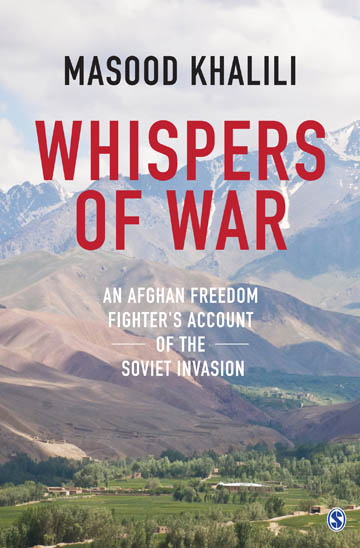 Once we gain peace, I am sure that Afghanistan and the Afghan people will be able to very quickly develop their country because one of the main things that Afghans never gave up was hope in their hearts. If you have hope, you can achieve anything because you know that every bad situation changes and that wrong cannot stay for long. The spirit of the Afghan people can be seen in a very simple story which I wrote in Whispers:

After lunch, I went to visit a boy’s school of this village. They were sitting under a big old green poplar tree. I tied my donkey to a rusted nail on its giant trunk. The boys were from 10 to 12 years of age. They were excited but I did not know of what, my donkey or myself.  It was again a painful sight to see.  Blood fills of one’s eyes at seeing the poverty of these boys.  Their shoes, their shirts and their overall appearance was very poor. Some of them were barefoot. Their clothes were full of patches.

My dear, now listen to what happened while I was in the small and poor class.
I very proudly told the cute boys, “write azaadee or freedom for me.”

Only two little boys started writing.
I abruptly asked the teacher, “Why are only two of the boys able to write?”

While poor eyes of the boys were focused on me, in a soft voice, the teacher said, “Mr. Khalili, they can all write but in the whole class, we just have two pencils”

I was ashamed of my question.

My Dear, when we gain our freedom, it will not only be at the barrels of a guns, firing their thousands of bullets at the enemy but also at the tips of those two pens. I pray that one day millions of kids have schools to attend and endless pencils to write.