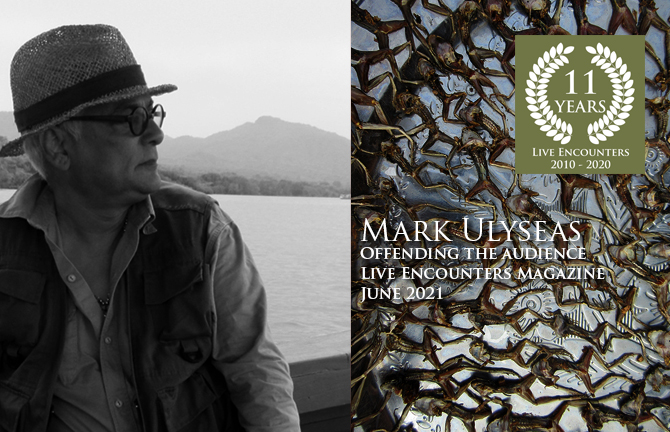 Mark Ulyseas has served time in advertising as copywriter and creative director selling people things they didn’t need, a ghost writer for some years, columnist of a newspaper, a freelance journalist and photographer. In 2009 he created Live Encounters Magazine, in Bali, Indonesia. It is a not for profit (adfree) free online magazine featuring leading academics, writers, poets, activists of all hues etc. from around the world. March 2016 saw the launch of its sister publication Live Encounters Poetry, which was relaunched as Live Encounters Poetry & Writing in March 2017. In February 2019 the third publication was launched, LE Children Poetry & Writing (now renamed Live Encounters Young Poets & Writers). In August 2020 the fourth publication, Live Encounters Books, was launched. He has edited, designed and produced all of Live Encounters’ 215 publications (till June 2021). Mark’s philosophy is that knowledge must be free and shared freely to empower all towards enlightenment. He is the author of three books: RAINY – My friend & Philosopher, Seductive Avatars of Maya – Anthology of Dystopian Lives and In Gethsemane: Transcripts of a Journey.  www.amazon.com/markulyseas 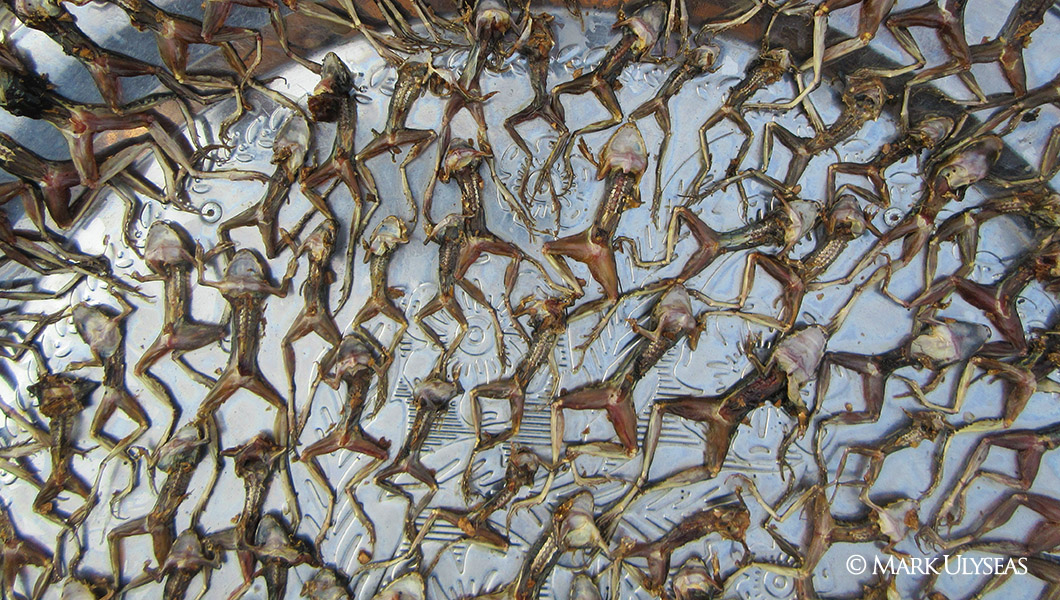 Frogs gutted and laid out to dry in the sun. Laos. Photograph by Mark Ulyseas.

Shall we begin with a number from Paddy Roberts’ Songs For Gay Dogs?/ Or do we rerun the CCTV images of a black beating an Asian on a street in the USA?/ Or should we watch the funeral of the pregnant Palestinian woman killed in an Israeli air raid to the cheers of a select group of exceptional online onlookers?/ Or the reports of Chinese concentration camps for Uighyurs?/ Or watch the stoning to death of those accused of blasphemy?/Or the hijack of a commercial airliner by a country just to capture a blogger accused of sedition?/Or the beating to death of a man suspected of inhumanity to cows?/ Or the hazy images of a female foetus being aborted?/Or a sneak peek at human trafficking and slavery?

The good news is that we can access any aberration of human nature with our thumbs by running them across the keyboard of our phones. Many among us join in with not just our thumbs. And the amazing thing about this is that we can add our misinformed opinion and then pass it off as our truth. This is our version of pornography – salacious, mendacious, violent images and words intended to tickle the animal within, to arouse within it the feeling of being part of the pack that bays for those that do not conform to its rules of engagement.

There are many packs across the world, each with its own version of rules. Some for their affinity to colour, language, religion or genitalia, or all these attributes prepacked in one special limited pack.  The outsider is not permitted to question anything and must abide by those wonderfully twisted woke and/or politically correct gendarmerie, gendarmerie that have made enlightenment appear like a castrated bull in a field of cows.

Tell me a word
That you’ve often heard,
Yet it makes you squint
When you see it in print!

Tell me a thing
That you’ve often seen,
Yet if put in a book
It makes you turn green!

Tell me a thing
That you often do,
When described in a story
Shocks you through and through!

Tell me what’s wrong
With words or with you
That you don’t mind the thing
Yet the name is taboo!

And despite our induced unmindfulness there remains an iota of delusional self-respect embedded in our psyche that abhors the open sesame to reality in its purest form, like rapists who presume they are making love to a loved one. In some cases, they (rapists) are actually…with their wives or partners who have refused them entry and are forced to bear the joy of the rapist/s.

France was right when it drew the line of sexual consent to 15 years (?). Prior to this there was no specific age of consent. Meanwhile in other parts of the world child marriage is blessed by the elders, including the elderly groom. One never hears about an elderly bridegroom marrying a boy child? Much like FGM, which is assumed to be perpetrated solely by men, when in fact it is a section of women who ensure the ‘cut above’. And to the delight of some, it has now been elevated to a religious act.

Perhaps we should remove self-imposed limitations of ‘consent’ for anything in any form, in mind and body, and liberate the animal within. To let it openly challenge the so called ‘decency’ of societies. To release the Alex within (fictional character in Anthony Burgess’s novel A Clockwork Orange) could be the first step.

If the doors of perception were cleansed every thing would appear to man as it is: Infinite. For man has closed himself up, till he sees all things thro’ narrow chinks of his cavern.

The keys to the doors are our thumbs that appear to have been delinked from the embodiment of our soul. The brain works in tandem with our thumbs. Hence, the smell of iniquities remains on our hands, never to be removed. This cycle never breaks for most of us. Our souls remain in suspended animation quite often in cultural appropriations

And so, we soulless wonders create and populate our world with like-minded fellow travelers to build a habitation that decries and derides all those that do not conform to our rules of self-incarceration – like whose WORD is the Truth. Exceptionalism is our banquet of self-indulgences.

And as our enclaves multiple so do the hashtags.

From hash browns to hashtags, we’ve come a long way…

A long way from tree tops to concrete jungles.

Perhaps the only way out is in…

…the first step being to release the animal…

back into the wild.

*Publikumsbeschimpfung (which better translates as “Insulting the Audience”)
by Peter Handke, 1966.