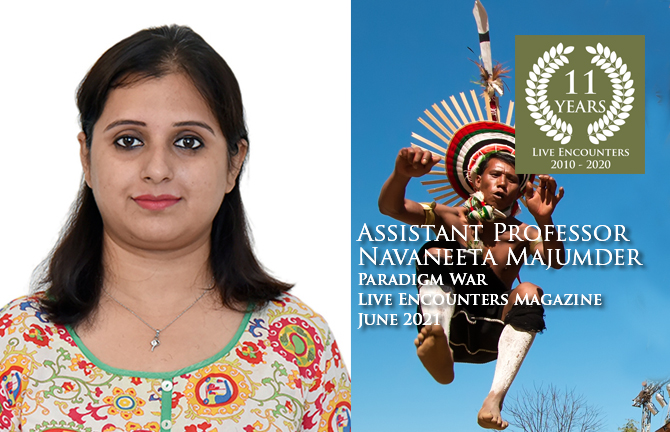 Ms. Navaneeta Majumder is an Assistant Professor at GLS Law College, Ahmedabad, India. Currently, she is also pursuing her Doctoral Studies from Tata Institute of Social Sciences, Mumbai, India. She has nearly 12 years of experience in teaching and working in the development sector. Her area of interest is in Development Studies and Mixed Research Method, with thematic interest in the area of Health and Development; Tribal Studies, Demographic Studies, Gender Studies and Sociology of Crime. She is keenly engaged in research and publications. She has published more than 10 papers in reputed journals and edited books and has presented numerous papers in national and international conferences. https://tiss.academia.edu/NavaneetaMajumder

The world we live in is multi-cultural with a corresponding plethora of worldviews. This paper highlights a distinct understanding of an Indigenous vision of world, as compared to Western world views. This can be best explained by discussing the acclaimed work ‘Paradigm Wars: Indigenous People’s Resistance to Globalization’, edited by Jerry Mander and Victoria Tauli-Corpuz, as part of International Forum on Globalization.

The editors have described two sets of paradigms in their work Paradigm Wars, i.e. paradigm of economic growth and paradigm of Indigenous way of life. Here, Mander have shown how both the paradigms are at war with each other.

According to Mander, there are immense dangers of a paradigm that focus on economic growth. This he explained by drawing attention to the manner in which economic globalization poses devastating threats to human and other biological life. Therefore, as per the paradigm of economic growth, Governments who promote economic globalization are motivated by their own economic growth and thus, they sign different multinational agreements, like, the North American Free Trade Agreement (NAFTA). These agreements are advocated and mediated by international organizations like the International Monetary Fund (IMF) and the World Trade Organization (WTO). The main aim of these agreements is to follow the principles of geo-economic, by relaxing the boundaries between countries, so that it becomes easier to extract resources and expand economic growth of the corporates. According to the editors of Paradigm Wars, the policies of the IMF, the WTO, and the World Bank provide corporations the ‘same legal rights as humans’ because they are treated as ‘persons’ and can thus, legally assert ‘human rights’ to conduct their businesses as usual. (Mander, 2006)

As per Mander, this economic paradigm, not only emphasizes on the damaging effects of extractive industries, such as, oil, natural gas, and mineral mining, but also impacts many other aspects of native life, such as, food, water, language, education, and genetics. Mainly the concepts of water war and bio-colonialism have most wide-reaching impacts of an economic growth paradigm.

While discussing the paradigm of economic growth, the editors of Paradigm Wars, describes the next paradigm, i.e. how the Native communities are changing the ‘rules of the game’ by trying to preserve life in its many diverse forms, which includes their determination to challenge corporate privatization efforts, to assert the claims of Indigenous population over their land and natural resources, and of developing renewable wind energy. The efforts of the indigenous people to counter the hegemonic paradigm of economic growth, has been established on a war footing. And this clash of paradigms has been termed as ‘paradigm war’ by Jerry Mander.

Debate Between Nature and Culture: An Anthropological Paradigm as Developed by Descola

Descola writes that science must “metamorphose” to include objects which are not just anthropologic, but also the collective “existents” [elements or holistic] which are connected to humans in relationship. He has conceived of four ontologies that may be used to categorize man and his environment across all continents: totemism, which highlights the material and the continuity of material and morality between humans and non-humans; analogism, which holds that between the elements of the world, a matrix of discontinuity exists, structured by corresponding relations; animism, which gives nonhumans the interior of humans, but are only differentiated by their bodies; and naturalism which attaches humans and non-humans by a continuing material, but still separates us with cultural specificity. So according to Descola, world vision of a society is an organic construction. He finds that the Western duality of nature and culture is being rebuilt or at least contested by a ‘primitive’ monolithic idea of nature and culture. (Descola, 2005)

In the first chapter of the Beyond Nature and Culture, “The figures of continuities” Descola shows, that in other cosmologies, everywhere in the world, the frontiers between human and objects are imprecise or even absent. The Achuar are animist. They think that wild animals and plants have a soul, act like persons and share social values. In the Amazonian thought, it is impossible to see the world from a unique human perspective. Animals and plants see themselves as humans. But they don’t see the same things as we the humans see, because they don’t have the same body or sensorial abilities. For instance, jaguar and spirits see humans as prey, but the animals, which are hunted by humans see humans as spirits or predatory animals. This example invites us to consider the ‘agency’ and ‘potency’ of non-humans. That is to say how non-human can have an intentionality, an ability to act and a spiritual power, so that they can transform the world and have social relations with other species of beings. (Descola, 2005)

A similar discourse on the increasing relevance of indigenous/tribal culture and its role in promoting sustainable development, has been elaborated in the book titled, “Indigenous Sustainable Development in Latin America”. It has dealt into the issues, related to the role of indigenous culture in creating sustainable planet in the 21st century. (MacNeil, 2020)

The above section provided us with an anthropological perspective of the traditional vision of Indigenous population. But since late 20th century, it can be seen, that, the process of globalization is changing the rules of games and shaping Indigenous vision and perspective vis a vis the dominant western economic paradigm. A recent study by Hershey, has underlined, that, economic globalization continues to be a form of colonial domination by the erstwhile empires, just with a different nomenclature. Likewise, the term globalisation has an ethical connotation like ‘democracy’ and ‘freedom’. In this regard, Hershey has pointed out that, globalization has a specific urgency for the tribal/indigenous people of this world, as most Indigenous ways of collective economic endeavours do not auger well with the capitalistic notion of ‘individual accumulation’, thus, leading to creation of two antithetical worldviews. (Hershey, 2019)

This economic paradigm is characterised by resource wars, which have resulted in serious conflict, invasion, double dealings, forced removals, cultural and political assaults, and extreme violence in the lands of the native people. (Alvarez & Coolsaet, 2020) For instance, during the 1990s, as part of World Bank mandated Structural Adjustment Program (SAP), the coal mining was privatised in Indian state of Odisha. Therefore, rivers were contaminated, along with rise of fluoride poising, causing infectious and cancerous diseases among the native tribal population. It also witnessed displacement of villages and townships, along with an 500% enhancement of power rates. The SAP also weakened the environmental and labour laws of India, thus, adversely impacting the tribal population, as many used to rely on such laws to retain their control over their community land and resources. (Hershey, 2019)

This situation aptly describes the concept of ‘paradigm wars’, i.e. a world view based on opposite understandings of how human beings should live on Earth. The primary motive for targeting natives by multinational corporations rises from the fact that indigenous people were successful over millennia, upholding their cultures, economics, world views and practice, which are not built on the idea of geo-economics.

This paradigm has been aptly dealt by both Anne Waters and Mander in their respective edited books on Indigenous vision. To understand the issue in detail, the example of ‘bio-colonialism’ is quite appropriate. This Debra Harry calls a ‘High-Tech Invasion’. History of indigenous struggle depicts the amount of exploitation faced by native people for natural resources, animals and cultures, as these has been rendered as commodities, i.e. how native land and culture has been commodified by the Westerners. But now a new form of mode of invasion, has arrived, known as ‘bioprospecting’. It is being used by transnational corporations for privatizing and monopolizing genetic structures, cell lines of native plants, seeds and even people. This search for genetic resources for economic gains have led to the development of a new form of colonialism, known as ‘bio-colonialism’. This has made possible the free trade of genetic materials and life processes. This process has been facilitated by TRIPS, through WTO. (Harry, 2006) It allows the companies to claim monopoly on ownership of human genes, biodiversity of native land, water and knowledge, which were traditionally acknowledged as ‘gifts’ and now been converted to ‘commodities’ for sale. In this regard, the Indigenous people have been persistently asserting ‘no patent on life’ as expressed in the declaration issued in 1995 by stating that life cannot be bought, owned, sold, discovered or patented even in its minute or smallest form. (Whitt, 2004)

In her paper, Debra Harry points out various examples of bio-colonialism across the world. First among them was the 1984 law suit filed by John Moore against Los Angeles Medical Centre and University of California against using his cell line for advances in treatment of cancer without his consent. In a landmark judgement, it was established that patients do not have a ‘property right’ in the tissues removed from their bodies. This resulted in a dangerous legal precedent, which allowed the hospitals and pharma companies to take advantage on the research on genetic resources, cell lines, blood cells, etc. (Harry, 2006)

This shows the fear of the indigenous population, who have endured more than 500 years of colonization, and are currently concerned about the arrival of yet another weapon in the arsenal of colonialism. This time, they fear that the new weapon is to know the ‘the secret of life’, thus striving to control the definition of what it means to be human and their understanding of ‘life itself’. (Chiro)

This paper presents a ‘pan-Indigenous’ vision, based principally on the work of Indigenous scholars. This vision is shaped by long held views by numerous Aboriginals from both within and out of academia. (Ouellette, 2010) Recently, the book titled, “Pluriverse: A Post-Development Dictionary”, has engaged in a retrospective discussion on the issues of development and its aftereffects. It has attempted to reassess the meaning of development and discussed the meaning of post-development in contemporary times, especially in relation to the indigenous/tribal people inhabiting this world. (Kothari, Salleh, Escobar, Demaria, & Acosta, 2019)

Therefore, on the basis of these studies, certain distinct Indigenous ideas has become prominent, such as, ideas of survival, structural violence, native lifestyle, and other similar theories, that help to create conditions for decolonization and post-development. And these distinct ideas have come together to form, what we call ‘Indigenous vision’.

Chiro, G. D. (n.d.). Indigenous Peoples and Biocolonialism: Defining the “Science of Environmental Justice” in the Century of the Gene. Retrieved March 16, 2018, from http://comphacker.org/comp/engl338/files/2012/08/Indigenous-Peoples-and-Biocolonialism.pdf

Kothari, A., Salleh, A., Escobar, A., Demaria, F., & Acosta, A. (2019). Introduction – Finding Pluriversal Paths. In A. Kothari, A. Salleh, A. Escobar, F. Demaria, & A. Acosta, Pluriverse: A Post-Development Dictionary (pp. XXi-XXXViii). Tulika Books and Authors Upfront. Retrieved from https://vikalpsangam.org/wp-content/uploads/migrate/Resources/pluriverse_book_introduction.pdf