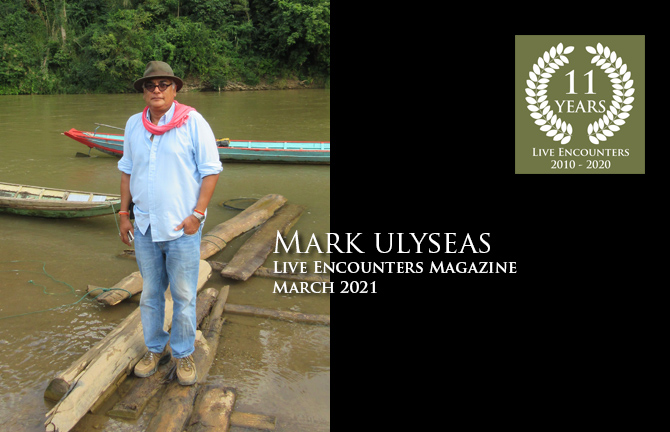 Mark Ulyseas has served time in advertising as copywriter and creative director selling people things they didn’t need, a ghost writer for some years, columnist of a newspaper, a freelance journalist and photographer. In 2009 he created Live Encounters Magazine, in Bali, Indonesia. It is a not for profit (adfree) free online magazine featuring leading academics, writers, poets, activists of all hues etc. from around the world. March 2016 saw the launch of its sister publication Live Encounters Poetry, which was relaunched as Live Encounters Poetry & Writing in March 2017. In February 2019 the third publication was launched, LE Children Poetry & Writing (now renamed Live Encounters Young Poets & Writers). In August 2020 the fourth publication, Live Encounters Books, was launched. He has edited, designed and produced all of Live Encounters’ 208 publications (till March 2021). Mark’s philosophy is that knowledge must be free and shared freely to empower all towards enlightenment. He is the author of three books: RAINY – My friend & Philosopher, Seductive Avatars of Maya – Anthology of Dystopian Lives and In Gethsemane: Transcripts of a Journey.  www.amazon.com/markulyseas

Democracies in the true sense do not exist. But nationalism does and is often confused with the former.

A glance across the world of democratically elected governments will reveal its (democracy’s) true nature – benign plutocracy, where the rich get richer and poor poorer.

A democracy has now become the Nation. And under the banner of nationalism with its rising army of woke liberals and activists many professionals from all walks of life are falling prey to a word, phrase or even a minor human error…their entire careers being forfeited. The combination of nationalism and new activism (woke liberalism) has given rise to the culture of ―if you are not with us, you are against us. This disturbing trend is fast evolving into a hegemonic mindset that seeks to reset societies into what is perceived as ‘rightful thinking and living’ even to the extent of attempting to rewrite historical wrongs. The usual suspects that support such an endeavour are the media, political and social. Each takes sides in different countries, according to their own agendas, to direct the flow of thought towards one destination – keep the masses entertained. And surprisingly this has become quite easy with the control of the electronic media, political parties and a section of religious leaders. Those living within the walls of such dominions falsely believe they live in freedom. But is this freedom?

In the words of Vandana Shiva ―

The Nation and woke liberalism are two sides of the same coin. Both complement each other by imposing their diktat as to what they perceive should be the values of a society. Both create a fear of being singled out for individual thought and both seek punishment: one by the power of the state and the other by the power of an exclusive group. There is no escape from either the thugs of nationalism or those of woke liberalism.

Perhaps the reason why there is a rise in nationalism and woke liberalism is that people, the ordinary folk do not have the luxury of free thought. They are living on the precipice of sheer uncertainty – high prices, joblessness and caring for their families. Therefore, the shenanigans of the rich and powerful are not to be interfered with for fear of reprisal.

Each society has its own cultural peculiarities and hence one size doesn’t fit all. The blanketing of all societies with a universal code is like attempting to force a round peg into a square hole.

The COVID pandemic has created a perfect storm for those with agendas to enforce long held nationalistic beliefs on the populace. And this reflects in their treatment of people. Conspiracy theorists aside one must listen to the people especially those who have lost their jobs and those that are handicapped both mentally and physically, their needs. Presently, it would seem that all these hard working folk are being treated as sheep that do not possess any powers of reasoning. This is unfortunate as these are the very people who elected the politicians to power.

Democratic nationalism and woke liberalism are being ‘marketed’ by folk akin to snake oil salesmen of yore. The elixir against all societal ills, guaranteed to take away all forms of thought that don’t conform to these two ‘proven’ methods. It is backed by a section of the media. Hence, the global footprint is scary.

Democracy is the big lie that masks its true identity ― fascism. And woke liberalism is complicit in this deception by creating its own form of fascism by being so far left that it is right.

In the words of Joseph Goebbels ―

“If you tell a lie big enough and keep repeating it, people will eventually come to believe it. The lie can be maintained only for such time as the State can shield the people from the political, economic and/or military consequences of the lie. It thus becomes vitally important for the State to use all of its powers to repress dissent, for the truth is the mortal enemy of the lie, and thus by extension, the truth is the greatest enemy of the State.”*

Will the renaissance of free thought return to revolt against these two frauds? And how will the powerful electronic media respond to this threat? And will the revolution, if it comes, become a ‘customer’ for technology to exploit? And will anything intrinsically change for a more peaceful and non-violent world?

Perhaps the only truth that exists is in the nature of the beast, humanity.