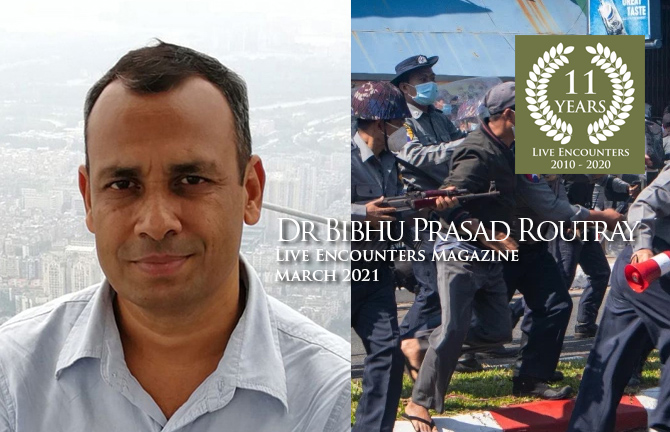 Dr. Bibhu Prasad Routray held the position of Visiting Professor and Indian Council of Cultural Relations (ICCR) chair, India Studies at Murdoch University, Perth between July-December 2017. He served as a Deputy Director in the National Security Council Secretariat, Government of India and Director of the Institute for Conflict Management (ICM)’s Database & Documentation Centre, Guwahati, Assam. He was a Visiting Fellow at the South Asia programme of the S. Rajaratnam School of International Studies, Nanyang TechnologicalUniversity, Singapore between 2010 and 2012. Routray specialises in decision-making, governance, counter-terrorism, force modernisation, intelligence reforms, foreign policy and dissent articulation issues in South and South East Asia. His writings, based on his projects and extensive field based research in Indian conflict theatres of the Northeastern states and the left-wing extremism affected areas, have appeared in a wide range of academic as well as policy journals, websites, and magazines. Article republished by permission of www.mantraya.org

Following a coup d’etat on 1 February 2021, democracy in Myanmar took a back seat. Ever since the results to the parliamentary elections were announced in November 2020 in which the NLD secured a landslide victory, the military had been expressing its displeasure, calling the elections a fraud marred exercise. The coup has been condemned by a large number of countries. The US has even called for a reversal of the military’s move. This analysis examines the outcomes of the coup and its larger impact on the future of democracy in Myanmar.

A new regime assumed power in Myanmar in the early morning of 1 February 2021. Two and half months after the National League of Democracy (NLD) registered a landslide victory in the parliamentary elections drubbing the military-backed political party, the Tatmadaw (Myanmar military) detained the state counsellor and leader of the National League of Democracy (NLD) Aung San Suu Kyi along with a host of political leaders, and announced a state of emergency on its Myawady TV channel. The emergency, it said, would last for a year. Without giving a time frame, the military has also declared its intention to hold fresh elections. The declaration was signed by the First Vice President U Myint Swe, who is a military appointee. He will now be serving as Myanmar’s acting president.

Below are the seven observations that can be drawn from this coup d’etat, which almost everyone who study Myanmar knew was in the making.

1. Cohabitation model does not work: Unless the civilian government completely surrenders to the military, the co-habitation model of a powerful military and an aspirational civilian government does not work. In Myanmar, the so-called political reforms have not occurred since the end of the direct military rule in 2011. While the Tatmadaw retained enormous concentration of power through the 2008 constitution, the continuous effort of the civilian government to bring changes to the state of affairs is an irritant. The model has worked in countries like Pakistan because of the skewed nature of civil-military relationship.

2. Not a surprise move: Almost everyone, including the global powers, saw this coming and did nothing to prevent it. Since the results to the November 2020 parliamentary elections were announced, the Tatmadaw had not minced its words about its complete disapproval for the polls which it termed as ‘fraud marked’. Few days before it finally decided to go ahead, the commander-in-chief Min Aung Hlaing had announced that he intends abolishing the 2008 constitution that allowed the ‘fraud-marked’ elections to go ahead. No warnings to prevent the military from implementing its plan was made by those countries who have now expressed their anguish about the move.

3. A powerful military: In spite the so-called march of democracy in the last decade that witnessed the holding of two parliamentary elections, Myanmar’s military remains a very powerful institution within the country. Even while the country faced no existential threat from any external power and only mini rebellions on its periphery from the ethnic insurgencies, several nations rushed in to ink pacts and gifted weapon systems which even included a submarine. In the bid to counter China’s growing role, military diplomacy unveiled by a slew of nations including the U.S., India, Japan, and Australia appears to have emboldened the Tatmadaw that continues to cast itself as the protector of the nation.

4. End of the road for democracy: The last time Tatmadaw undermined the results of a popular mandate for the NLD was in 1991. It presided over the country’s fortunes for the subsequent two decades. The 1 February development could mark the start of a similar period of military rule, unless the West or the U.N. decides to intervene with a purpose. However, such chances are remote. The Tatmadaw’s actions are bound to find some levels of tacit approval from Myanmar’s powerful neighbours like China. In the name of bringing order to a chaotic country, the Tatmadaw should be able to sail through the initial days marked by global outrage.

5. A test for Biden Administration: Among the reactions made thus far, the United States’ has been the strongest. It not only condemned the development, but warned of a response ‘if these steps are not reversed’. In contrast, most other nations expressed only ‘concern’. It remains to be seen how the new Biden administration goes about handling what is essentially its first major diplomatic challenge. Its steps to ‘reverse’ the state of affairs and restore democracy in Myanmar will be keenly watched.

6. Economic interests vs Sanctions: The conventional reaction of nations in such circumstances has been to impose economic and diplomatic sanctions on the country. Similar sanctions had been imposed on Myanmar throughout the 1990s and continued till 2008, before the military unveiled a quasi-military regime. In the past decade, Myanmar’s growing economy and the business opportunities it offers has been found to be extremely lucrative for a large number of nations. Both geopolitics and geo-economics make Myanmar a potential partner for countries belonging to different blocs. The world’s bilateral trade with Myanmar has registered sharp increase in the past years. China, Thailand, Japan and India have emerged as the country’s four largest trading partners. The U.S.-Myanmar trade was to the tune of US$1.28 billion in 2020. While the Tatmadaw would have calculated the risks, it is taking by carrying out a coup, will the West risk its economic interests over promoting democracy in Myanmar remains a key question. While sanctions will have no major impact on the Tatmadaw in the near to medium term, it will simply result in China and Myanmar’s other neighbours usurping the share of the country’s trade with the sanctioning nations.

7. China gets to adopt Myanmar, yet again: There have been several news reports in the past about China’s declining role in Myanmar. Among other factors, these are sparked by local civilian protests against Chinese infrastructure or investment projects in the country. Despite that Beijing remains deeply entrenched in Myanmar and shares deep bond with the military, the civilian leadership, and even with some of the ethnic insurgencies that are fighting with the military. If there is a single nation which has a clear idea about the turn Myanmar’s democracy is taking in the post-parliamentary elections period, it has to be China. China’s overarching role in Myanmar will limit the capacity of other nations to build pressure on the Tatmadaw.

Nations around the world have used the chaos onset by the Covid-19 pandemic to suppress democratic aspirations. Myanmar’s military has gone even a step further. In the last two and half months, it appears to have prepared well for the coup. If allowed to run through its plan, Tatmadaw will write a new constitution that in all likelihood will further cement its position in Myanmar’s body politic. It is likely to receive support from a host of small anti-NLD political parties and the nationalist Buddhist groups. On the contrary, Aung San Suu Kyi does not seem to have prepared the NLD well for a long hiatus away from power. Even a one-year military rule may prove to be too serious a setback for the future of democracy in Myanmar.