The Poet (for Paulo Coelho) by Mark Ulyseas

Mark Ulyseas has served time in advertising as copywriter and creative director selling people things they didn’t need, a ghost writer for some years, columnist of a newspaper, a freelance journalist and photographer. In 2009 he created Live Encounters Magazine, in Bali, Indonesia. It is a not for profit (adfree) free online magazine featuring leading academics, writers, poets, activists of all hues etc. from around the world. March 2016 saw the launch of its sister publication Live Encounters Poetry, which was relaunched as Live Encounters Poetry & Writing in March 2017.  In February 2019 the third publication was launched, LE Children Poetry & Writing (now renamed Live Encounters Young Poets & Writers). He has edited, designed and produced all of Live Encounters’ 165 publications till date (September 2019). Mark’s philosophy is that knowledge must be free and shared freely to empower all towards enlightenment. He is the author of three books: RAINY – My friend & Philosopher, Seductive Avatars of Maya – Anthology of Dystopian Lives and In Gethsemane: Transcripts of a Journey. www.amazon.com/markulyseas

The media continues to spew out images of violence, hate and hunger from across the world. Denizens of the oxymoronic social media are fuelled by this and race forward with words and moving pictures and comments that grow, continue to grow, to ensnare unsuspecting folk in the Net…to be poisoned by destructive subjectiveness. Love, self-evident in all of us, is brushed aside in an overwhelming panic to keep up with the herd. And yet the columns of faithful continue to grow, to genuflect before the gods in many avatars, praying for peace and prosperity and assorted personal needs. The charade is almost believable if it were not for the arrogance of those that assume an air of divine exceptionalism that exceeds reality.

Every day is a miracle for we appear to be alive in a world still turning. The precipice of damnation is, perhaps, a breath away, a switch away, a command away, when, like dominoes can collapse into a hell wrought by our own unsteady hands. Has humanity always been like this – lemmings racing towards the cliff edge?

Much is being written on the environment, the rising temperatures, the glaciers, and the denudation of ancient forests. Warnings are shouted from the rooftops, breathless soothsayers of doom enunciate the perils of our excessiveness.

Yet the earth moves, rotating on its axis as if gently controlled by gigantic celestial hands. The sun rises and sets. The moon does her bit, while Mother Nature trudges on through the thinning under-growth, attempting to preserve what’s left of her home by wreaking havoc on humanity with natural calamities – earthquakes, tsunamis, incessant rains, floods, landslides etc.

This does not dissuade the greed of the human race. Development continues at a frenetic pace. Ayes and Nays squabble over climate change whilst hundreds of millions of hungry people feed off the waste of the fortunate.

Censorship is now imposed by word tzars who are attempting to force their diktat on all – you can’t say this, you can’t say that. Reverse discrimination towards the male sex, particularly if they are white, is the mantra. Paint everyone with the same brush. Who cares, we are in charge!

The marginalisation of sensibility by mutant form of liberalism is infecting many and creating a new strain of genetic disorder called mental immobility, translated as dereliction of mind. Individuality, which is akin to a fabulous colourful patch on a ‘patched hand-made quilt’, is sinking in the quick sand of laziness.

This rising resignation of will, of purpose, is endemic.

Flag waving is now more evident than ever. Vociferous crowds bay for power, for control over others. Dressed in the colours of the flag they taunt those that do not share their views – violence being the rule rather than the exception.

Have gun, will kill.

Have knife, will stab.

Meanwhile those that have garnered the votes divide the spoils of governance, having their cake and eating it too. The rats get the crumbs.

And for the fifth estate, it has been occupied by dissenting groups to further their own petty causes. Sound bites are crafted into symphonies of propaganda that seduce many into believing post truths. The animal within is mesmerised by the light and sound show. The fifth estate’s culpability in destroying or contaminating many natural born seekers of truth is reflected in social media.

Amidst the burgeoning mass of mindless folk who prefer to hitch a ride on the bandwagon of self-indulgence, there still exists a secluded island of hope. And on this island there lives the poet – an immaculate soul who toils for nothing, but everything. The verses drawn from the elements infuse a sense of truth, of love, of an undefined divinity that shines from within out. 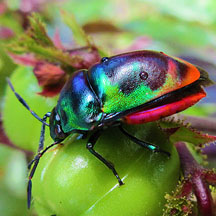 And all those that read these verses are blessed to think for themselves, to imagine beauty, and to feel it – the rhythms of Mother Nature, the sound of a butterfly’s wings and the aroma of jasmine after the rains. A universe unfolds in the mind. A universe inhabited by exotic like-minded souls whose sole purpose is to personify all that is bright, beautiful and loving. A universe of Truth where one has the strength to dream, to love, and forgive unconditionally.

Let us hope that the poet continues to toil, to burn the midnight oil, to create verses of song to instil in all of us hope for a beautiful life where hate, anger, violence and lying to oneself is overcome, where compassion encompasses all, and the oneness with Mother Nature is in complete harmony.