Dr. Debarati Halder is presently working as Professor and Head of the Centre for Research on Law & Policy in Unitedworld School of Law, Karnavati University. She is the  Honorary managing director of Centre for Cyber Victim Counselling (CCVC) (www.cybervictims.org) (an online not for profit organisation (www.cybervictims.org) meant for helping and counselling the victims of internet and digital communication crime victims). Dr.Debarati Halder is also the founding secretary of South Asian Society of Criminology and Victimology (SASCV)(www.SASCV.org). She had received her PhD degree from National Law School of India University, Bangalore (NLSIU). She had received her LL.B degree from University of Calcutta and M.L. degree from University of Madras. She has served as a lawyer in Madras High Court and Tirunelveli District courts.  Dr. Halder is an independent legal researcher. She has authored two books including “Cyber crime against women in India” by  SAGE Publications India Private Limited, (co-authored with Professor K.Jaishnakar) and   “Cyber Crime and victimisation of women: Laws, rights and regulation”, published by IGI Global, Hershey, P.A.,. Dr.Halder has also edited a book titled “Therapeutic Jurisprudence and Overcoming Violence against Women” published by IGI Global, US in 2017. Apart from this, Dr. Debarati Halder has also published many scholarly articles on online victimisation of women, children and laws, Therapeutic Jurisprudence, Human rights, Prison rights of women etc  in many national as well as international peer reviewed journals including the British Journal of Criminology, International Annals of Criminology, National Law School Journal, Journal of Law and religion and many edited books including “Cyber criminology”, “Social networking as a criminal enterprise”, published by  CRC press, Taylor & Francis Group;  Dr. Halder  along with Dr. Jaishankar has developed a theory called “Irrational coping theory for online victimisation” which is published as a book chapter titled Irrational Coping Theory and Positive Criminology: A Frame Work to Protect Victims of Cyber Crime in the book titled “Positive Criminology”, (2015) edited by Natti Ronel and Dana Segav, Routledge, Taylor & Francis group, UK. 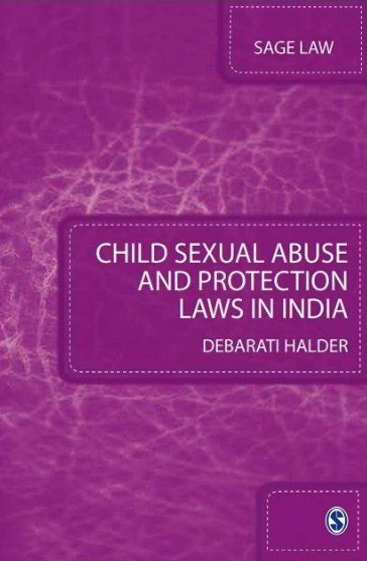 With the increase in the number of child sexual abuse including institutional sexual abuse of children, we need to have focused discussion on the causes of such sorts of abuses on children, how the existing laws may be best used and what are the lacunas in the existing laws which need to be addressed by the legislatures, executive and the judiciary. Child victims of sexual abuse and their parents may also feel hesitant to report sexual abuse fearing secondary trauma from the police, further infringement of privacy by the media and threat for more harm from the harasser. This is because the victims and their families may not be aware of the provisions of the existing laws which provides strong provisions for protecting the privacy of the child victim who is in need of care of protection. In many cases, the child victims may not even be able to communicate about the victimization because they cannot verbally communicate about this with their parents as well as with the court officials.  Further, in recent years, we have also seen huge misuse of information and digital information technology by adults and children for the purpose of sexual exploitation of children, creation of child porn materials using children. The impact of digital contents on the minds of the children may also need to be assessed to understand how it directly or indirectly aides in child sexual abuse and sexual harassment. Above all, the stakeholders must also be concerned with the rehabilitation of the abused children. The whole process of receiving the report, investigation of the case, getting the information from the victim directly, sending the child for medical test and medical assistance incase he/she has undergone severe physical and emotional trauma, assisting the child in the court, counseling the child and the family of the child etc., must be done following the Therapeutic Jurisprudential principles which advocates for use of laws as a “healing mechanism”. This book focuses on this very discussion. The uniqueness of the book lies in the Chapterisation: the book is divided into five parts including the epilogue which contains conclusion. These parts discuss about impact of Child right convention and its protocols on the development of child sexual abuse law and juvenile justice administration laws in India (from the perspective of child sexual abuse,  rights of the child victims and juvenile offenders, rehabilitation aspects etc),  typology of child sexual offences with special emphasize on judicial interpretation of the existing laws dealing with such types of offences, penology for different kinds of  child sexual abuse, procedural practices for reporting, investigation, prosecution and trials and sentencing and rehabilitation with special emphasis on Indian socio-legal understanding about  child sexual abuse, sentencing and need for rehabilitation of child victims, especially girls. This book also throws special emphasis on sexual abuse of  girls when they are within the marriage institution with the help of  the recent  Supreme court judgments .

This book focuses on the need for gender neutral laws for preventing and punishing child sexual abuse. Earlier, the regulating laws including the Indian Penal Code emphasized more on the gender of the child victim: female child victims of sexual abuse were the primary concern for the criminal justice machinery. But with the creation of Protection of children from sexual offences Act, 2012, the concept of child victims has been broadened to include children belonging to  male, female and the ‘other category’ who may be having gender orientation problems and who may belong to the LGBTQ category. This book discusses the success of POCSO Act and Juvenile Justice Care and protection Act, 2015 in dealing with such cases. It also throws light on lacunas of these laws including the amended provisions of the Indian Penal Code (Criminal laws amendment Act, 2013) and provides suggestions in this regard. It also discusses about the differentiating points between different legal provisions, sentences that are prescribed by different provisions in table format. This would help the practitioners and students to understand the legal provisions in a better way. The POCSO Act has categorized child sexual offences in three main categories: sexual assault, sexual harassment and using of children for pornographic purposes. This book further analyses the categorization in the light of penetrative, non penetrative sexual assaults, institutional victimization, sexual harassment and from the perspective of cyber-crimes against children. Because of the existence of the POCSO Act and also the Information technology Act 2000 (amended in 2008), adolescent sexual habits of children are also seen from the perspectives of regulable or offensive sexual activities. This book throws light on this very issue with the help of recent international as well as domestic judicial interpretations and understandings.  It also discusses extensively on cyber sexual offences targeting children by adults as well as children.  While using children for creation of porn contents has already been recognized as an offense under the Information Technology Act, 2000 (amended in 2008) and also under POCSO Act, several issues are still considered to be in the grey area : these may include sexting, revenge porn by teens and adults  and the responsibility of the web platforms. Right to be forgotten again is another issue which needs to be discussed from the perspectives of Child rights. This book covers all these issues.

The procedural part again, needs a thorough discussion. How to deal with a child who may have been victimized by his/her own parent or family member/s? How to rescue the children from institutional victimization if the children are in children’s home? What is the legal procedure for the same? What is the role of Child welfare committee in this regard? How should the Juvenile Justice board deal with the child in conflict with law who may have been involved in sexual abuse of another child? How should Therapeutic Jurisprudential principles used by the courts to deal with child sexual abuse cases?  This book deals with these issues. Further, POCSO Act does not specifically mention about categorization of bailable or non-bailable offences. This book throws light on this issue. It shows that the punishment for certain offences is restricted to less than three years. Such cases must be considered as bailable relying on the Part II of the 1st Schedule (classification of offences against other laws) of  CrPc One; on the other hand, when the punishment increases from three years to more than three years, such offences must be considered as non-cognizable.

One of the unique issues that this book deals with is unique communication method between the child victim and the parents and the criminal justice machinery including the lawyers, judges and other concerned care givers: the author has researched on the development of dance mudras as specific body language which may be used as communicating mechanism to convey about sexual victimization of the children. This book suggests that such kinds of unique communication methods should be researched and used for dealing with cases of child sexual abuses.

The book would be helpful for practitioners, researchers, students and activists who are working to prevent child sexual abuse in any form, penology and Victimology on child rights and the violation of the same and Therapeutic jurisprudence. This book will also necessarily be helpful to understand about cyber sexual offences targeting children, penology and rehabilitation mechanism of the victims as well as the offenders (especially juveniles).