Afghanistan at Peace Without India? by Ambassador Masood Khalili

Son of a renowned Afghan poet, Khalilullah Khalili, Masood Khalili is the current ambassador of Afghanistan to Spain and former ambassador to many other countries. He is respected both in his country and internationally as an honest, patriotic, and elder statesman, as well as a political leader. He is author of Whispers of War.

Mahmud Khalili is a PhD candidate in Peace Studies and son of Masood Khalili.
He is the translator of his father’s war memoir, Whispers of War,
and has authored his own political book on Afghanistan, Afghanistan Decoded.
Mahmud has lived in New Delhi for many years while his father was ambassador
and has great affection for India and it’s people. 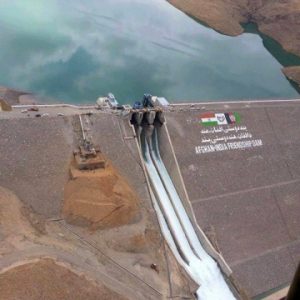 Salma Dam/Afghan-India Friendship Dam (funded by India US$300 million) is a hydroelectric power project built on the Hari River in Herat province. The plant has a power generation capacity of 42 MW. It can irrigate 75,000 hectares of agricultural land. The Dam was inaugurated on June 4, 2016

Fifteen years after the ouster of the Taliban from the capital, Kabul, by ground troops of the Northern Alliance backed by the United States Airforce, Afghanistan is a different country. Yet it is stuck in time. It still has most of the problems it had in 2002 with security being a major issue, the government not being efficient, corruption on the rise, a failing economy and a total lack of confidence in the country’s leadership.

It seems that every time we turn on the news or hear about Afghanistan, it is something awful or negative, so I think we should first try and see what are the positives that have occurred over the past fifteen years and which of those has India been a part of, since India has been one of the key players in the saga that is Afghanistan. One thing is for sure, the relationship between these two countries has never been stronger and that has everything to do with the projects that India has completed in this war torn country.

Afghanistan’s government doesn’t have the confidence of the people due to rampant corruption and absence of dynamic leadership. However, all three branches of government, for the most part, act independently of one another and hence maintain a certain level of checks and balances. Although the President has supreme power, Afghanistan has a functioning parliament, executive branch and a newly invigorated judiciary. Many international NGOs and governments, including those from India are actively trying to make the Afghan leadership more accountable for their actions and to ensure the rule of law.

Afghan politics will always have power hungry and corrupt leaders but the heartening development is that the youth of this country are trying to make the so called leaders accountable for their actions.

One key element in the checks and balances that is a boon to the people of Afghanistan is the media. Afghanistan’s press corps is one of the freest in the region. The states of Central Asia, Pakistan and Iran, do not have a media as free and open as the one in Afghanistan. Over 70 television channels, almost all of whom have news programming. There are at least a dozen channels dedicated to only news that are mostly privately owned. The country has over 200 radio stations of different kinds – from music to culture to news. Other than the couple of state owned media, there are no filters to what people say against the government, their policies and any other grievances they may have.

Another new phenomenon is social media. Facebook has ignited the political sphere of the country. Youth are turning to social media in a very big way. Political organizers have used this media many times to organize mass protests against the government, to showcase leaders’ indecisions and ease of filling their pockets from public coffers and to broadcast horror stories of the Taliban and Daesh. Women have also taken to using social media to further their own causes, highlighting different topics that have become very controversial – from young girls being able to ride bicycles, to women’s role in the work place, and women’s rights in general. Whatever needs to be said, Afghan media, whether it be traditional or social, has no restrictions and the government has no power to influence what content they put out.

Afghanistan’s government with all its flaws still has a functioning Presidential system. The country has conducted three elections. It has witnessed the peaceful transfer of power – the outcome of the last election saw President Hamid Karzai hand over power to the present incumbent, Ashraf Ghani.

The army, air force and police are over 400,000 strong. Both men and women are taking part in the defense of their homeland. Despite an ongoing struggle for emancipation, women are allowed to work in any capacity in Afghanistan and fight for their rights.

Every year, more colleges and universities are popping up all over the country to allow easy access to a better of education.

The economy is growing and this is evident with the massive rise in the number of trucks carrying cargo to and from Central Asia, Iran to Pakistan sea ports.

There is a rise in the number of infrastructure projects e.g. telecommunications and hydro dams. Plans are afoot to provide 24 hours electricity to all parts of the country.

First, we must talk about the government. Levels of corruption are still at an all-time high, keeping Afghanistan in the top 10 most corrupt countries. Afghans believe that their so-called leaders cannot function without corruption. It has become endemic to the culture. From the highest in the land to the lowest, it is believed that most people with any sort of power will be corrupt in one form or another.

Second, security is at an all-time low. Taliban are regaining ground every year and are conducting successful suicide attacks and planting more roadside bombs. I was personally present at a suicide bombing on a mosque this summer where several dozen people were killed. They were attending the same funeral at which I was present. Fortunately, I escaped unhurt.

Across the country, suicide bombers are attacking domestic and foreign targets. Not only is Taliban a threat to the security of the country but Daesh is a new player that is rapidly growing in strength with a sophisticated propaganda program backed by violence. Their influence is mainly in the North-East of the country, where they are gaining more support with each passing year.

Third, the amount of cross border infiltration by some of our neighbors has increased exponentially over the years and does not seem to have an end point. Pakistan’s intelligence service, the ISI, continues to blatantly interfere in the internal politics of Afghanistan by supporting the Taliban and Daesh as well as having many Afghan leaders on their pay lists. Pakistan tries to create fear by giving the Taliban the raw materials for the suicide attacks or bombs and at the same time tries to hedge its bets by keeping Afghan leaders in their pockets, so that they can block any policy or law that might be passed that works against their national interest. Iran also does its fair share of interfering by influencing leaders in Kabul and supporting the Taliban.

With all of these issues still plaguing the country, there is one that effects the country the most … a lack of leadership. With the election of President Ashraf Ghani over two years ago, and the introduction of a new dual/sharing system of the executive, people have lost confidence in the President and CEO of the country. The total lack of any gains in the areas of security is the main issue that people believe that the leadership should be doing more to combat.

Having heard the positives and negatives, you might ask yourself, the situation seems too complicated and overwhelming but what can be done?

India should reconsider its role in Afghanistan in light of policy of strategic depth by Pakistan. It should do as much as it can to put more pressure on Pakistan with its allies throughout the world. India should have talks with China to coerce the ISI in order to help stabilize the situation in Afghanistan. It should also talk to USA, Russia and Iran to make a coalition of sorts to squeeze the Pakistanis.

Another thing that India can do to keep the pressure up is to continue development projects in coordination with the Afghan government such as the Salma Dam that was completed last year that supplies electricity to thousands of households and takes away the monopoly that Pakistan has had over power in Afghanistan or projects such as the Chabahar port in Iran. The Pakistan government was against the Chabahar port being opened because it would take away from its monopoly it had over goods going through Central Asia and Afghanistan to Pakistani sea ports.

India’s continued and enhanced involvement in Afghanistan could serve to neutralize the negative influence of Afghanistan’s neighbors as this would bring more stability. Another area that it could address is the lack of leadership. India could be involved in putting pressure on the Afghan government through its international allies to bring about fair elections in two years to ensure that the Afghan government does not delay elections in order to hold on to power. India could also try and address the issue of corruption through introduction of educational efforts and NGOs that could help guide the government in bringing about policy execution that would reduce corruption.

Even though India can transform its involvement to become one of the major players that brings positive change, it cannot do it on its own. India must befriend other regional powers in order to move the country towards peace. Afghans have a warm affection towards Indians through their music, movies and television shows. Most Afghans would welcome more involvement by India and it has invested heavily in infrastructure and in particular, development projects ongoing and completed.

If the goal is Peace in Afghanistan, then India must be far more involved than it is already. We salute all of the efforts that India has made so far but a more determined India would make the path towards peace more definitive.

As my eldest son and I were writing the final words to this article, the words to a poem came into my mind. May God help the people of both Afghanistan and India.

For years , like thorns we burnt in pain,
Who except the spring of peace,
Can differentiate,
If our thorn field is a rose garden! 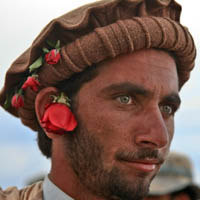