Yogyakarta is a thriving town in Central Java and one of the most iconic places in Indonesia. Like many other places in Indonesia it is changing fast as businesses and industry grow and beautiful batiks and floral headwraps give way to the dun coloured jilbabs and drab dresses. But the creative spirit stays strong and the arts scene is thriving.

Art and artists grow in the warm and fecund atmosphere with many galleries holding exhibitions of cutting edge style.

Yet, behind the fast growing exuberance is an older more spiritual and traditional layer, the synceticity of old Java. Step inside the hallowed grounds of the historic Sultan’s palace – the Kraton and you will experience a different, more stately world. Pass through the ten foot thick, white walls and you enter a hallowed space where everything is cleanly and calmly in order and ancient traditions prevail.

Old abdi dalem or court retainers walk about with a dignity that is missing in the younger generations. Sundays and Wednesdays, the strains of silvery gamelan filter through the hallowed spaces as perfect classical dance performances entertain those who are interested. People are polite and refined with courtly manner. Surrounding the Kraton are the homes of the Palace servants and craftspeople and even today if you take a walk through the narrow lanes, you will possibly get a whiff of heating wax as they fire up to draw intricate and age old patterns on the raw cloth in preparation for the dyeing processes which are involved with batik production.

Sri Sultan Hamengubuwono X is the reigning Sultan and what makes Yogyakarta especially interesting is that during the leadup to Indonesia’s fight for Independence, most of Indonesia’s Royal Kingdoms sided with the Dutch rather than their own people and the young leader, Sukarno, who later became the nation’s first President. Because of the Sultans loyalty, he was rewarded with the special status on Independence – a status that is still in place today. The current Sultan is also a respected Member of Parliament. 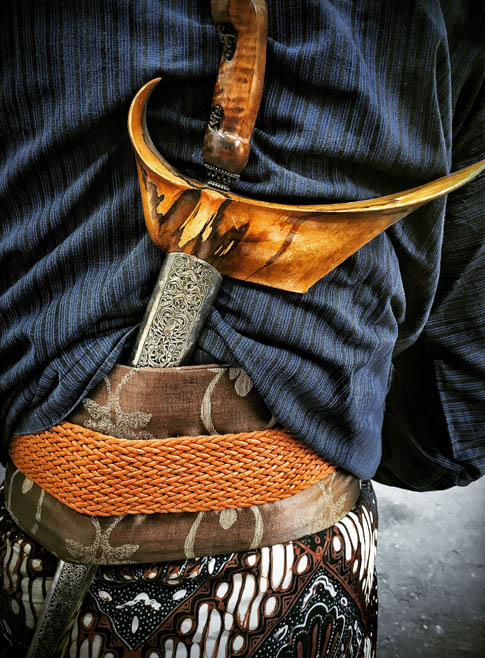 The Kris is Java’s icon. Every man used to own one and they are imbued with magical powers. Even though they are less well regarded now, they are still greatly respected.© Jill Gocher 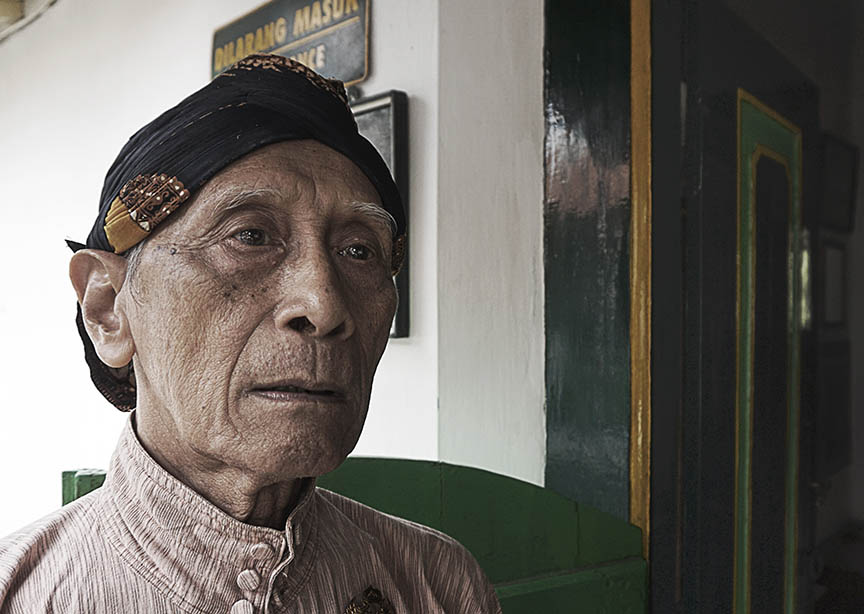 This younger brother of the previous Sultan Hangkuwobono 9th is a delightful eccentric who can sometimes be seen talking to palace visitors. © Jill Gocher 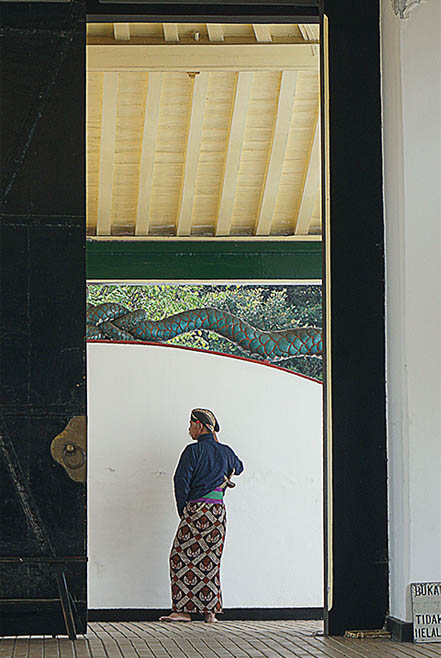 Light and space play such a part in the daily life of the Yogyakarta Kraton or Palace.© Jill Gocher 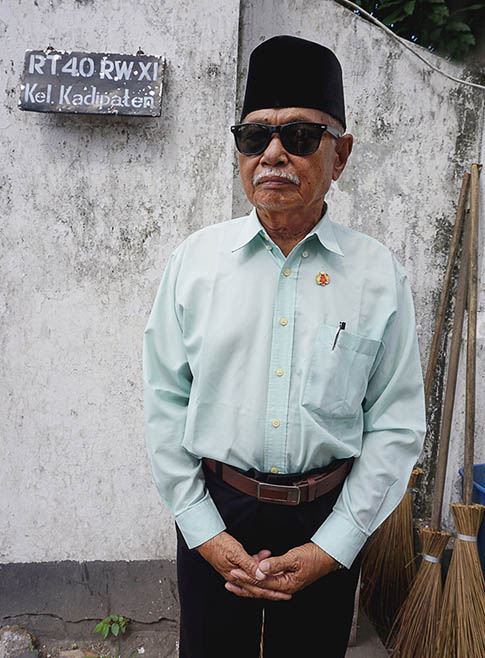 This dignified gentleman was delighted to have his photo taken
and displays the perfect Javanese demeanour. © Jill Gocher 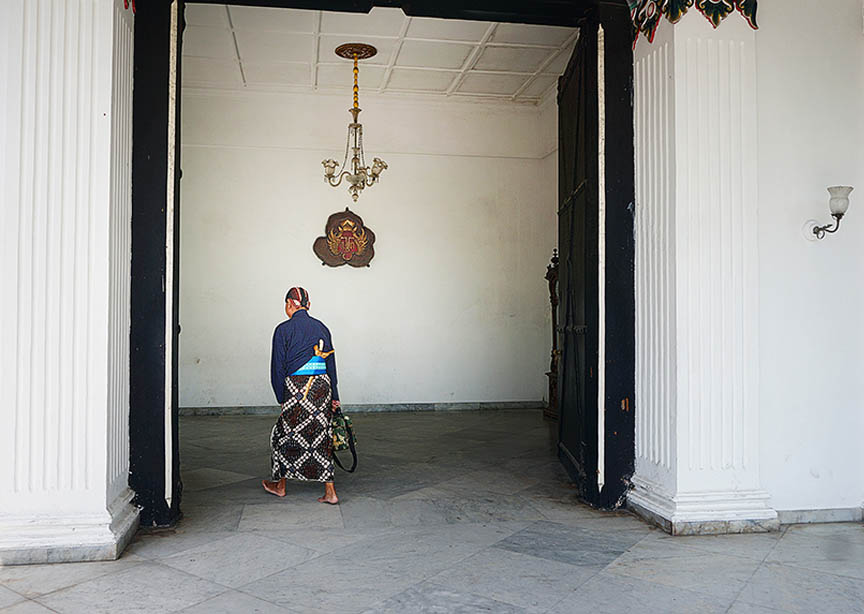 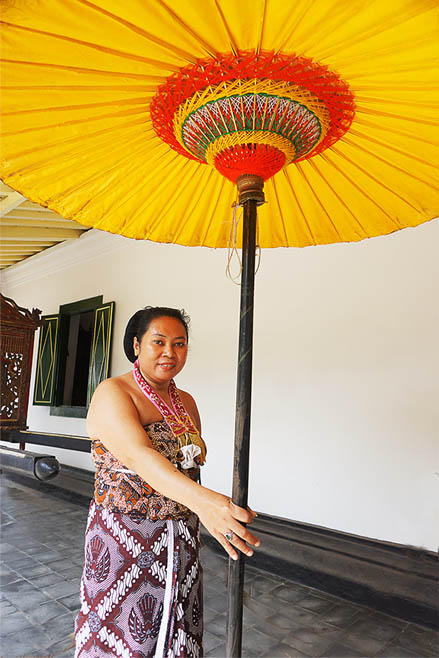 This woman holds the golden umbrella which is a symbol of royalty.
When his mid-morning tea is delivered, the umbrellas are used to shade
the procession as they make their way across the courtyard.
© Jill Gocher 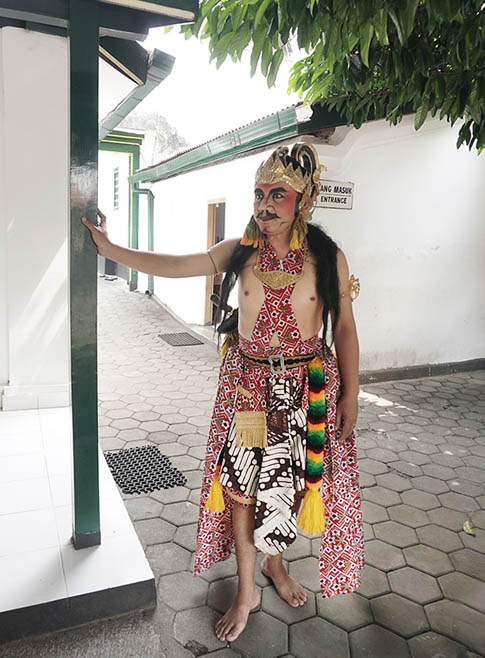 The dancer standing in the sidelines awaiting his turn to dance. This classical Javanese dancer cuts a fine figure. © Jill Gocher 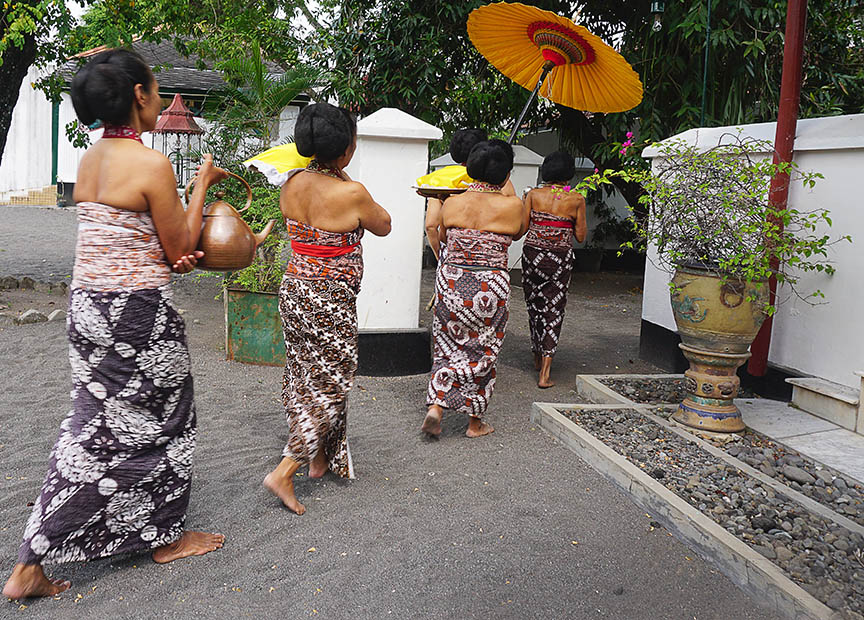 The morning tea procession makes a fine sight and is a daily event in the Yogyakarta Palace. Tea and a huge kettle are carried as well as plates of covered delicacies
for the Sultan to enjoy! © Jill Gocher