It was early morning and still dark outside but Melbourne’s Tullamarine Airport was already alive. I was waiting to board my flight to Jakarta with Garuda Indonesia who had been voted best economy airline in the world. Who votes for these awards?

People pulled their belongings in their little portable coffins, some with squeaking wheels. Many people listened to music through oversized headphones. Some seemed to have conversations despite being half asleep. I found a seat. Two little children were running around, no doubt excited to get on a plane, maybe for the first time. A man urged their parents to keep them quiet. He couldn’t read his paper in peace.

A woman near me seemed very nervous. Getting up, sitting down, looking left, looking right. Somehow her behavior tickled my imagination and a story crept up on me. I opened my notebook and began to write.

A woman in a worn out tracksuit has not been on a plane in years. She was not afraid to fly. She simply had no reason to board a plane. She was happy to walk everywhere, enjoyed her neighborhood more than traveling to faraway lands. Now I can see her dialing a number on her ‘old school’- phone to say goodbye to everyone she knows and she tells them that she hoped to get a window seat. She didn’t know that she could have chosen her seat. The online check in procedure was just downright confusing to her and it didn’t help that English was her second language or that she did not have a computer. She arrived well ahead of her departure time and after passing through security she realized that she had still more than two hours to kill before boarding would commence.

She bought herself a cup of coffee and drank it quickly and soon after took something from her handbag. She unfolded a faded paper serviette and revealed a cream cheese sandwich that someone had thoughtfully packed for her. She ate it quickly. I was certain that she also had some fruit buried somewhere in her oversized handbag, a banana or a pear which she wanted to save for later.

When she had finished eating she bought a magazine and passed the rest of the wait nervously leafing through it. Besides her bag, she had a suitcase small enough to be permitted as carry-on luggage but she didn’t like the overhead bins of this particular type of plane, and so, when it was time to board, she handed it over to an attendant and asked it to be stored in the plane’s hold. Inside the plane, she found her seat and was mildly upset that it was a middle seat and just when she fastened her seatbelt the same attendant who had taken her suitcase appeared at the front of the plane to say that, due to storms in the city of their destination, the flight departure would have to be delayed. He couldn’t say for how long, but for now passengers had to return to the waiting area. She stepped off the plane and the attendant handed the little suitcase back to her. She was very worried about missing her connecting flight and approached another attendant at the gate’s desk, a young man, who she could not help noticing, had missed a few places while shaving that morning. He was the one who told her that the same storm delaying their take off would be delaying all other departures as well, which the woman took to mean she needn’t be too concerned.

Several times over the next three hours, while sleepily reading her magazine she thought about eating her banana or the pear but decided against it. Who knows when next she would get food? At some point a new departure time was announced only to be postponed at the last minute. Finally passengers were “invited” (the word provoked tired laughter) to get on the plane and, after another half-hour wait in the runway queue, the plane lifted smoothly into the air. She arrived safely and before she was allowed to leave the arrival hall she had to put banana and pear into a bin because fresh fruit was not allowed to be taken anywhere. She now regretted that she did not eat them earlier.

I closed my notebook and noticed that the children were now chasing each other a little further away and the man had moved to read his paper elsewhere. I bought myself a coffee and eventually my boarding call came and it was time to get comfortable in the world’s best economy seats. Time flew by and in an instant I landed safely in Jakarta. Heavy security awaited me; maybe because Indonesia was holding elections tomorrow. I paid for my temporary visa and headed towards further checkpoints. I passed them flying colors and headed to the baggage claim area and took a strategically smart position near the rattling carousel. The children were still playing, now in a different country and the man was still complaining. I suddenly realized that I had lost my wallet with everything inside, passport, credit card, cash and most of all photos of my loved ones. It must have happened sometime after passing immigration and the interrogating stares of the customs-officers.

I sprinted back and immediately was surrounded by soldiers. I smiled somewhat with the frozen look of someone who had no clue what to do. The soldiers put their heads together and made the decision to accompany me and after an eternity of retracing my steps I saw my wallet still sitting on a counter, untouched. I jumped for joy, thanked the little army that had accompanied me and made my way back to the arrivals hall, stepped outside into the humid Jakarta air and found a taxi from the Bluebird group which is the only trusted company in Indonesia and two hours of Jakarta traffic later I was in my hotel. I looked out the window and twenty meters from the end of the pool that was surrounded by tropical gardens I could make out makeshift huts, slum-like areas.

*
Later that day someone said near me at a table in a restaurant.

‘My new Ben Sherman shirt, imported from India by way of Indonesia, and indeed of a rather flimsy cloth, does not even have the benefit of a top pocket, a sorry omission.’’

The problems of the first world. 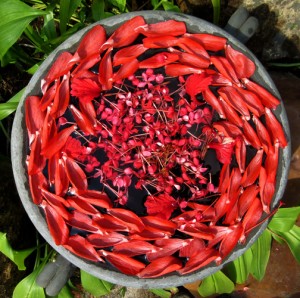