Ernie LaPointe, Great Grandson of Tatanka Iyotake (Sitting Bull) Buffalo Bull Who Sits Down who was a Sun dancer, Medicine Man and Chief of the non-treaty Lakota, speaks to Mark Ulyseas in an exclusive interview

You may send an email to Ernie LaPointe for book signings, talks etc. : crowfoot@spe.midco.net

Not long ago Europe was called the Old World and North America, the New World. No one mentioned the indigenous people living on the continent for thousands of years. It was assumed that they were of no significance: Their culture was considered inferior by the marauding white folk who took it upon themselves to civilise the natives by first occupying their lands and then engaging them in battle to seize control. All this culminated in the indigenous people being relegated to ‘reservations’ like animals. The ancient way of life, the languages were all but extinguished. Their young were civilised…Christianised. The invaders had distorted their own truths in their haste to seize the wealth and lands that did not belong to them.

It was cultural genocide.

Sitting Bull’s real name is Tatanka Iyotake, Buffalo Bull Who Sits Down. He belonged to the Húŋkpapȟa tribe of the Lakota Nation. History written by non-Lakota accuse him of leading the indigenous peoples against General Custer at the Battle of the Little Big Horn on June 25, 1876. He was never there. In fact he stayed behind at the settlement to protect the women and children. After the battle of the Little Big Horn, Sitting Bull was declared Public Enemy No.1 and was pursued by the US Government and the media.

Prior to the battle Sitting Bull had a vision that warned him against the desecration of the dead (US soldiers) in a battle in which the white soldiers were defeated… And if this happened great misfortune would befall the indigenous people. Unfortunately, the dead were desecrated by the victorious Natives in the aftermath of the battle of Little Big Horn.

The rest is now history…like the slaughter at Wounded Knee on December 29, 1890, where unarmed Native Americans were gunned down by the US Cavalry two weeks after the murder of Sitting Bull at Standing Rock Indian Reservation. Perhaps the cavalry in their feeble minds sought revenge for the humiliation of Custer. But this was not a victory. It was murder in cold blood of unarmed men, women and children of the Native Americans.

The US Government viewed the traditional customs of the indigenous people as heathenish and hastily enacted the Indian Offenses Act 1883 that outlawed the continuing of their customs that were un-Christian like. It was as late as 1978 that the Indian Religious Freedom Act guaranteeing the right of the Lakota and other tribes to perform their sacred rituals and ceremonies was passed.

The sacred Black Hills were again defiled by a white man from Connecticut who dynamited and drilled the faces of four white men onto Mount Rushmore.

In the following pages you will read about and hear the voice of the great Tatanka Iyotake, Buffalo Bull Who Sits Down, through his great grandson Ernie LaPointe who presents us with glimpses of his life during a time when word was honour and the people lived in harmony with Mother Earth.

Toksa Ake, (See You Again). There are no words for good-bye or farewell in the Lakota language. 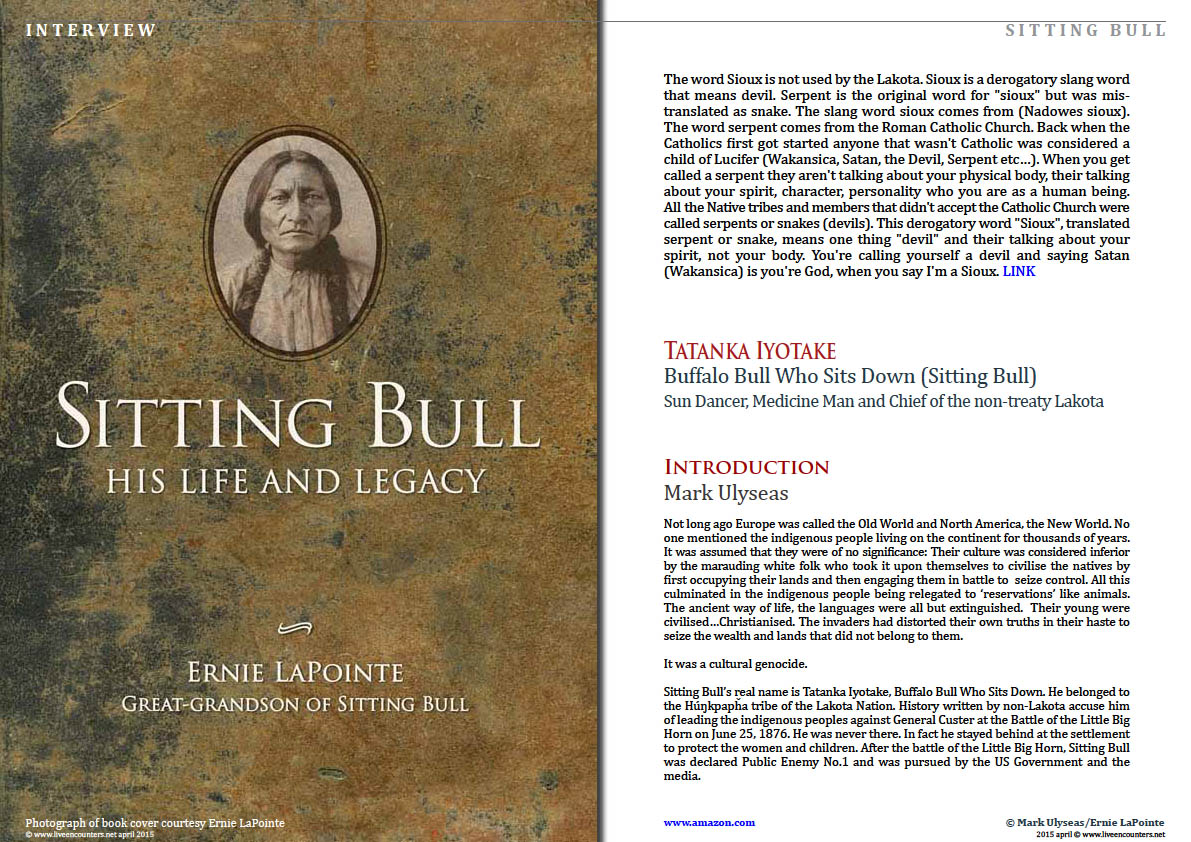 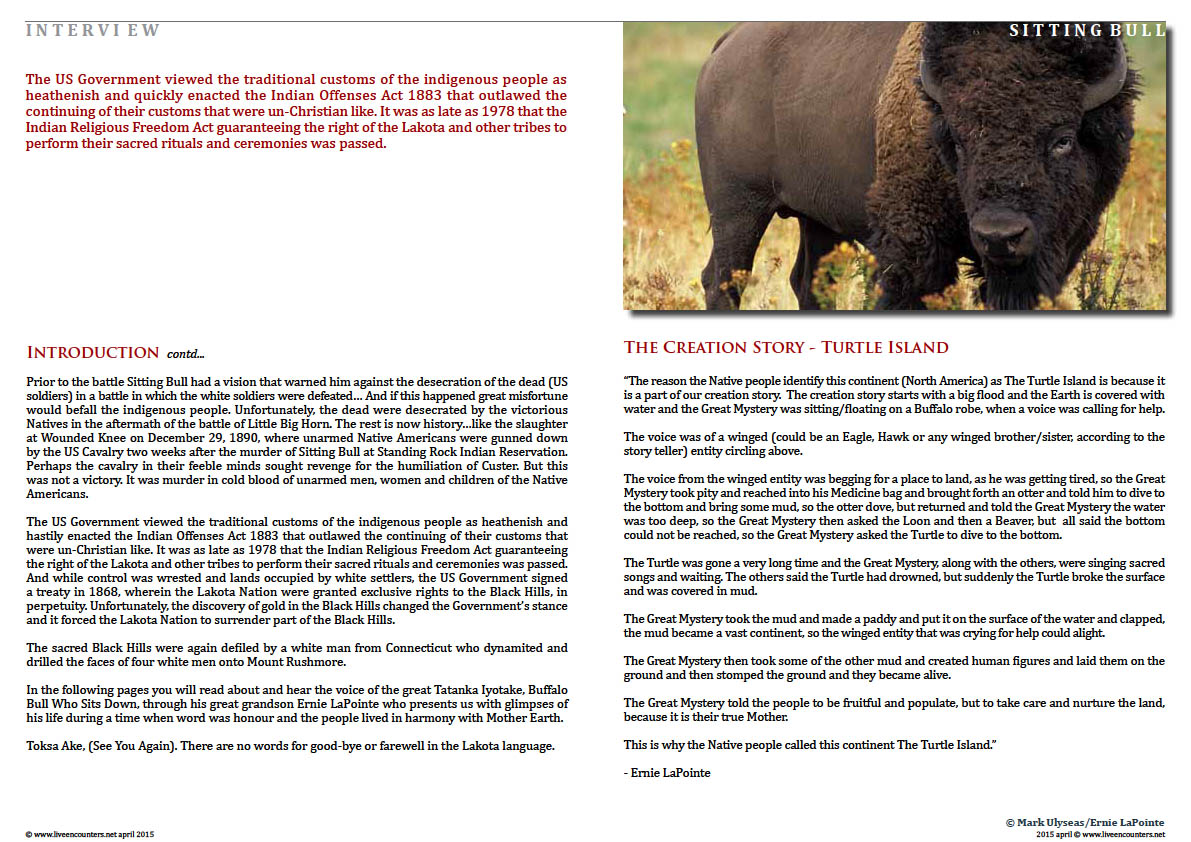 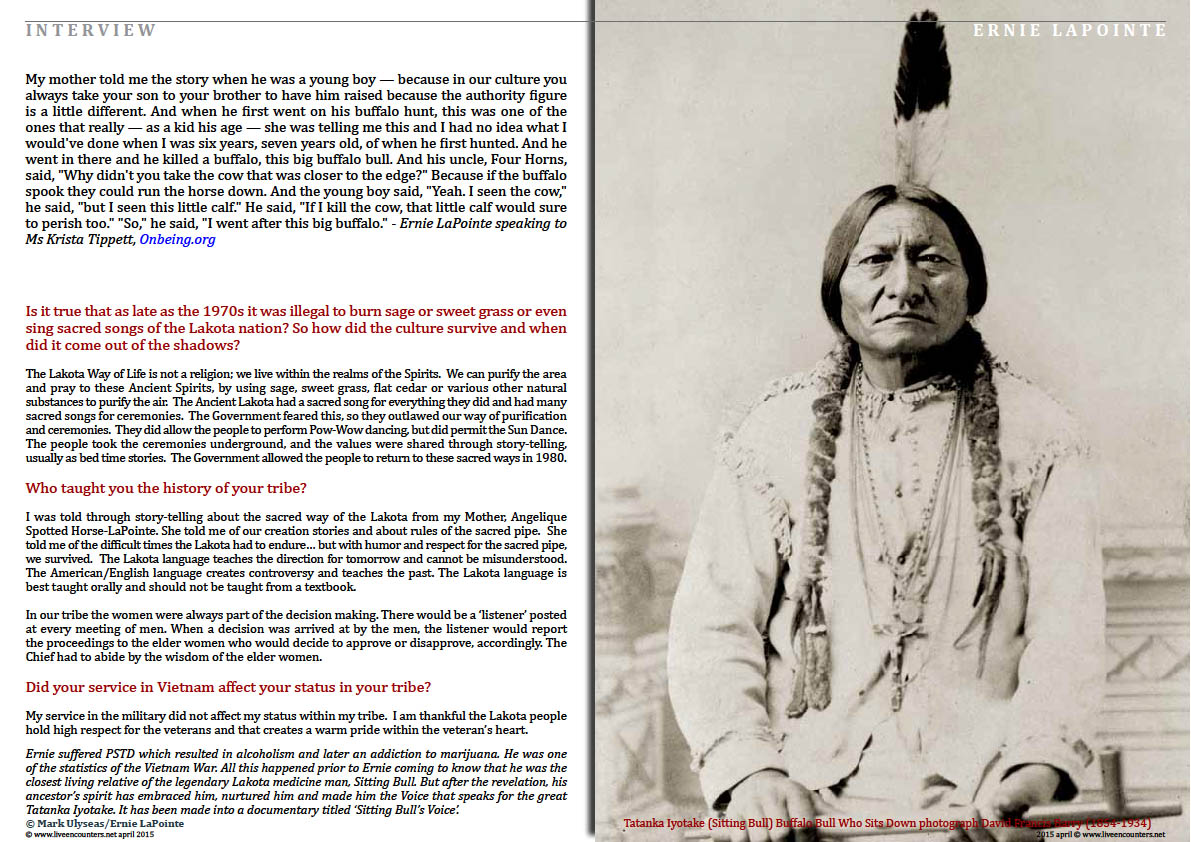 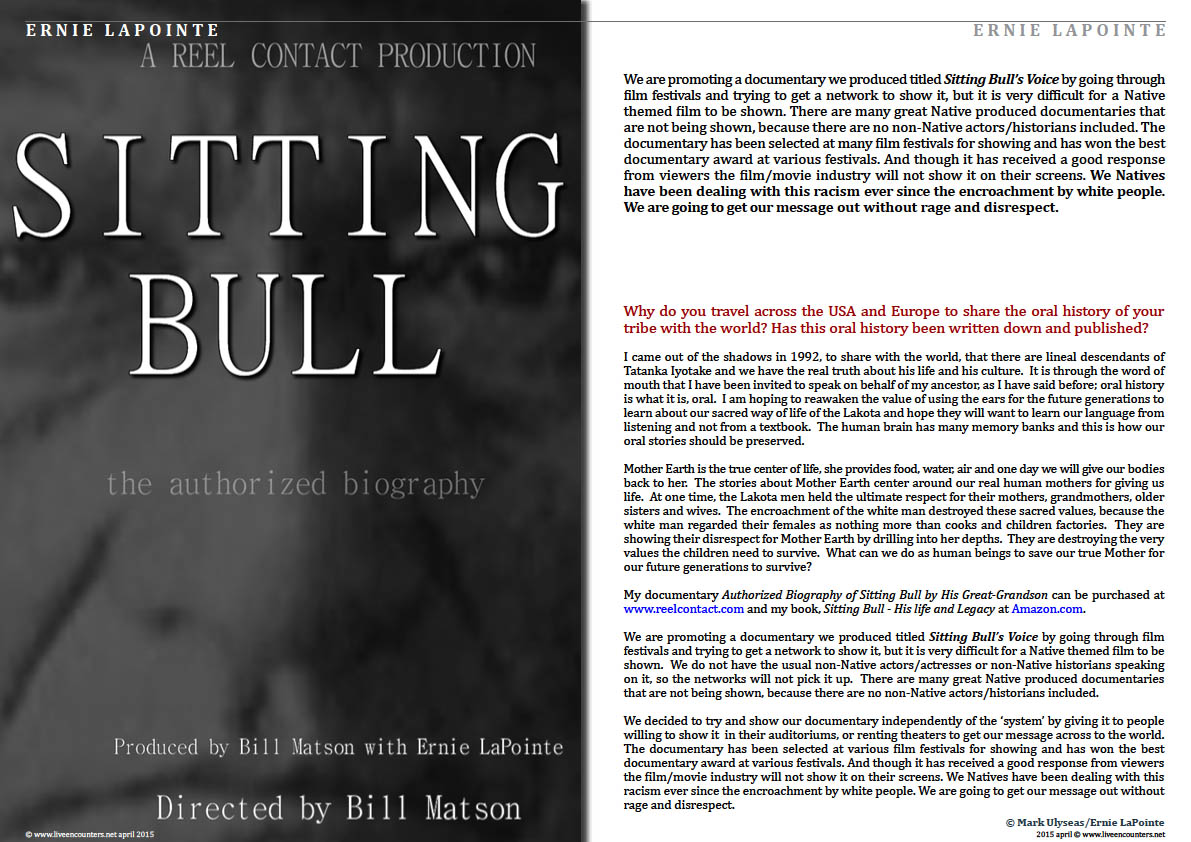 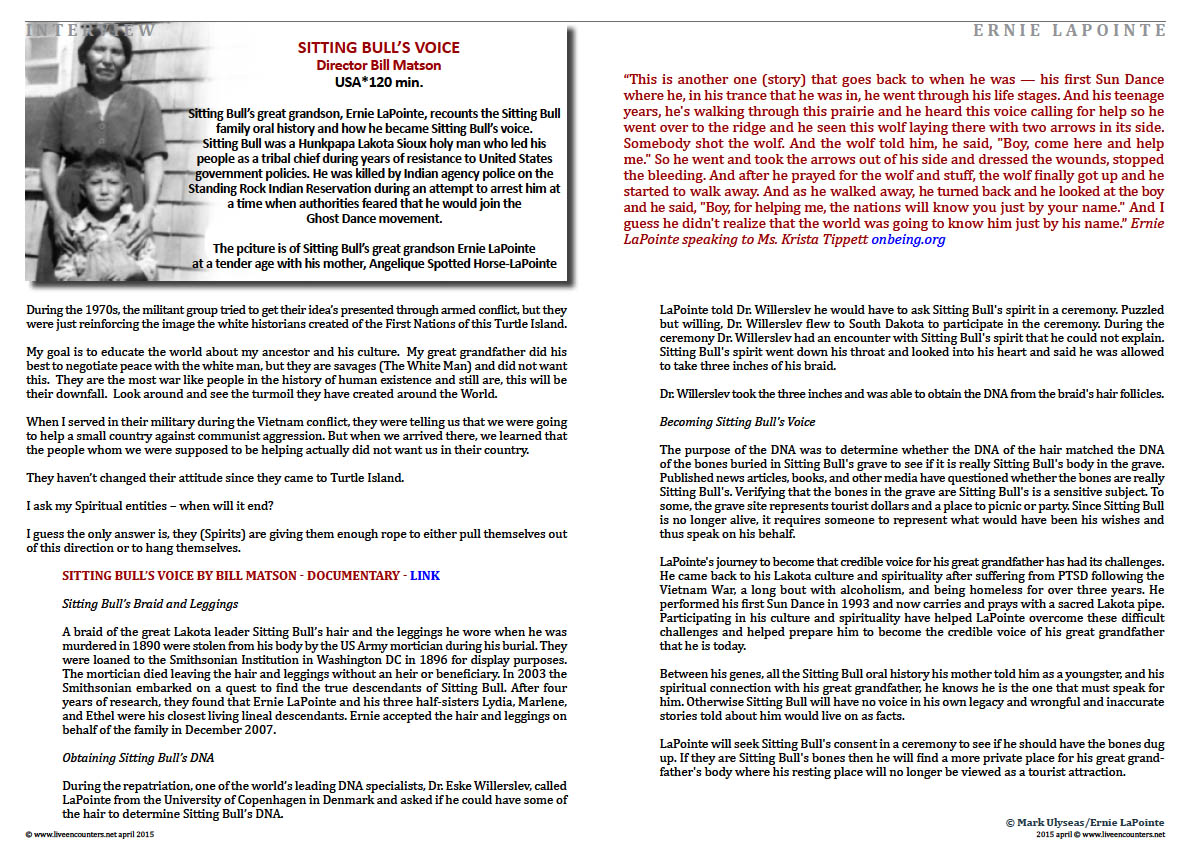 On his mother’s side he is the great-grandson of Sitting Bull and Seen By Her Nation Woman, grandson of Standing Holy (Sitting Bull’s youngest daughter), her Christian name was Mary Sitting Bull, and Urban Spotted Horse.  Ernie can point out a long line of chiefs on his mother’s as well as on his father’s side.  His grandfather Spotted Horse was the son of Hunts Enemy and the grandson of Chief Charging Bear.  His great-grandmother’s, Tokala Win LaPointe, brother was Chief Painted Horse.

In 1992, Ernie was given the opportunity to set the record straight on the Sitting Bull direct blood descendants by speaking at the induction of Sitting Bull into the Hall of Fame of American Indian Chiefs at Anadarko, Oklahoma.  Since then he had numerous invitations from Crazy Horse Memorial, South Dakota, and the Little Bighorn Battlefield, Montana, to speak about his heritage.  He also spoke at universities in Indiana (University of Notre Dame), Michigan, Ohio and Texas (Temple University).  The Monroe (Michigan) Custer Celebration Committee invited Ernie repeatedly to join and speak about his great-grandfather.

One Reply to “Ernie LaPointe on Tatanka Iyotake – Sitting Bull”