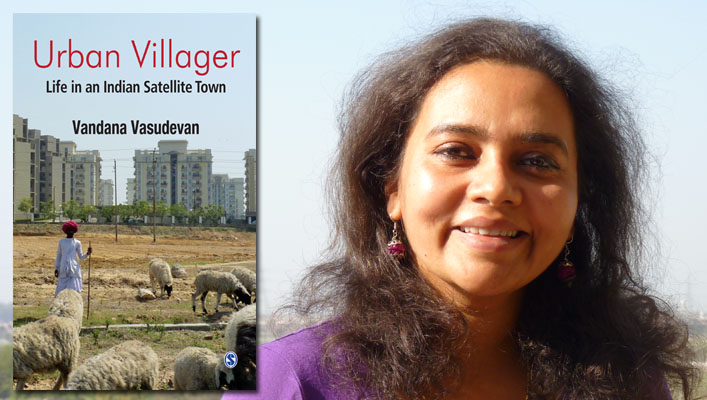 Vandana Vasudevan, author of Urban Villager, in an interview
with Mark Ulyseas  Published by Sage Publications

Is rampant development in real estate (housing) been the primary cause in the ‘creation’ of the urban villager? And is this development spurred by the rapid rise in the middle class and movement of rural folk to the big cities for work?

The real estate sector has been growing at an incredible 20% per year since 2005 when the government allowed foreign investment into real estate companies. Both domestic and foreign players rushed in lured by the demand and the high returns on investments. It has been moving along like an uncontrolled juggernaut- many fly by night operators have profited and it became common to hear of flat buyers who invested but the project never came up. Builders are perhaps the most powerful lobby in India and they influence land acquisition and allocation by the government. A lot of that acquisition is happening at the fringes of the city, moving further and further into the interior and gobbling up farmland creating “urban villages” around a metro.

This expansion of the city is definitely spurred by the rapid rise of the middle class, their demand for houses and their growing ability to afford them. That part is true. But it is not caused by the movement of rural folk to the city. In fact, it is the other way round. The urban folk are moving into the countryside because the countryside is getting urbanized. Large corporations have moved out of the city and are setting up factories in the hinterlands for cost reasons, which makes the city folk who work for them look for houses nearby. This in turn creates residential complexes and then shopping malls and so on. So, many urban villages are formed in the perimeter of the city, over decades they will get fully urbanized and then the city will push further inwards to create new urban villages.

Is it true that many villagers who had become rich by selling their land have frittered away the proceeds on purchase of fancy cars and splurging on entertainment etc., and therefore have become ‘landless farmers’ often resorting to antisocial activities including assisting real estate developers in acquiring more land?

In the suburbs of Delhi called the National Capital Region (NCR) consisting of Gurgaon, Noida, Faridabad and Greater Noida, the roads are full of SUVs. I know of a wedding celebration in a Noida village where the groom’s party-the baraat-landed at the girl’s village in a helicopter. In Greater Noida, in the village opposite my house the DJ plays trance and disco beats all night when there are weddings and the scale of fireworks is dazzling by any standards. The amount of cash and the kind of gifts given in dowries have skyrocketed. When I spoke to elders in the villages of Greater Noida for the book, all of them uniformly said that this was a recent trend, say, about ten or maximum fifteen years old. There weren’t such ostentatious displays of wealth in rural communities before- perhaps because there was no wealth. The villagers who sold land have become rich beyond their remotest dreams.

Some of them have wisely bought more land or started a business but the majority have no idea how to manage the money. They do not know of investments. Most don’t have a bank account. Rural banking, once a wave in the early part of the century has sort of petered out because villagers do not know how to save. This is across the country. Sociological studies show that cash as compensation has always resulted in it being frittered away, and that’s what I saw happening in Greater Noida. And they no longer have their land to fall back on, once the cash is exhausted. There is also the question of the youth in these villages having a huge amount of idle time. It is distressing to see strapping youth playing cricket in the village grounds every weekday. No college to attend, no jobs to go to. Just entire days of doing nothing. When they had the land, they were gainfully employed during the day-tilling, planting harvesting etc. This idleness has a social impact as it encourages drinking and casual crime.

What has been the socio-economic impact on villagers who live cheek by jowl with modern India in terms of education, alcoholism, crime, domestic violence including the murder of youngsters who have eloped, etc?

The sudden influx of wealth hasn’t brought a change in entrenched traditional thinking. In the years that I lived in Noida-Greater Noida I did not see rural girls travelling outside their village to study in college for instance. If college meant sending their daughter to a nearby urban centre, then they would rather stop with school. I did not see a farmer’s family saying “Now, I can afford to send my daughter to learn computers in the city, so let me do that.” Wealth hasn’t broadened their horizons or made them adopt modern ideas. In fact in a perverse way, wealth has perpetuated some social practices, especially those that are unfavourable to women. That’s why the practice of dowry is now stronger than ever. During a wedding in a Noida village, the father of the bride displays all the gifts that he is going to give his daughter- the brand new TV, refrigerator, furniture and of course the “chaar paiyye ki gaadi” (the four wheeled vehicle i.e. car). At one time the humble two wheeler would pass muster but not any more unless one wants to invite ridicule. Now a car is par for the course. If the farmer’s family has to save face in the community, they have to include in the dowry at least a Maruti 800 and very often an SUV.

The number of cases of women getting molested in these suburbs is only increasing as the news reports show us. Crime in general is on the rise, making these suburbs notoriously unsafe, especially after dusk. Carjacking, chain snatching, eve teasing and kidnapping are fairly routine. The Superintendent of Police of Greater Noida told me that one reason for this is the alcohol and the fondness for the good life that money can now buy. Rich village brats get hooked to it and don’t mind resorting to crime to keep up their lifestyle. In my book, there are several interesting anecdotes gathered from local people and insights about the connection between sudden wealth, easy guns, crime and a society that continues to be very patriarchal and orthodox.

Has the sprouting of Art villages like Hauz Khas in New Delhi and the yearly Surajkund Mela in neighbouring Haryana enriched the meeting of modern and rural India? Or, is this just another economic activity in no man’s land where everyone earns a bit?

The two examples are very different. Haus Khas village contains restaurants serving global cuisine, outlets of fashion designers, French style patisseries and boutiques selling kitschy knick knacks. None of it has anything to do with the original Haus Khas village behind the tomb/mosque complex where you can see people going about their lives, quite disconnected from the hip urban crowd just a few feet away from them. The streets in the village are narrow and the place seems like any other low income habitat in and around Delhi.

The Surajkund mela on the other hand is quite different. It is organized by the Haryana tourism department and features numerous craftsmen from across the country who show their wares to visitors from across the world. Therefore it is a forum for the urban and rural to interact.

Haus Khas village is a space and exists in a different world from the original village that it has been carved out of. The Surajkund Mela is an event created around the principal of a rural-urban meeting ground. This sort of event in a new town like Greater Noida, would boost local self esteem.

My next book called “Tough Customer” is based on urban consumer experiences and is expected to be published in the spring of 2014.

——————————
Vandana Vasudevan was educated in Lady Shriram College and trained in management from the  Indian Institute of Management, Ahmedabad. She has worked in the corporate world for several years in leading banks and in media. In parallel, she has been a writer and has been writing for various Indian publications including a fortnightly column “Tough Customer” in the business daily Mint,  on urban consumer and civic experiences.

Her writings can be found in www.vandanavasudevan.com. She spends a large part of the year in different cities in India and abroad, which provides grist to her interest about how cities are growing and how they transform the societies within them.