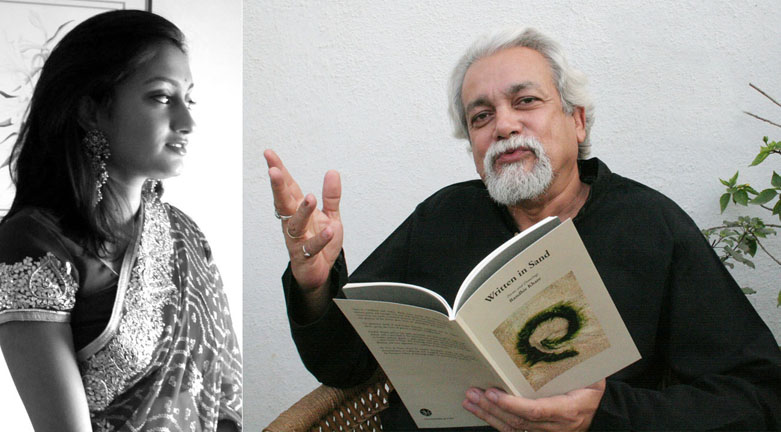 Lavanya Khare, daughter of Randhir Khare, speaks to him on his 50 years of writing.

Randhir Khare is a teacher, writer and theatre person. He started his career in theatre acting and journalism before shifting his focus to teaching, writing and workshops. His work with different tribal communities has brought him recognition. Khare is representing India at Europalia this year on Diversity/Tribal Issues.

Since you have chosen to write in English, has your use of language been influenced by your multi-lingual exposure ?

Yes certainly. I find it difficult to write ‘straight English’ because I find it artificial. My written English is really spoken English with multi-lingual Indian rhythms and cadences, broken sentences and in a way idiosyncratic. This came in handy when I wrote plays for my theatre company.

Why was English your choice for your medium of expression?

Because it was the language I was most familiar and comfortable with. Besides that – because my immediate family had moved away from Kanpur and the Hindi speaking North to Bengal. We lived in a part of Calcutta that had a considerable number of English speaking families – people from various nationalities as well as Anglo Indians. So you could say that my surroundings further stimulated my choice of English. Then of course at another level, for a culturally in-between person like me English was the obvious choice.

You have been writing for 50 years now, how has the game changed for you?

Personally, it hasn’t changed. I still write because I am compelled from within and not because I want to be published . And that too – only when I am satisfied with what I have created do I publish. Of course, my canvas of themes, styles and concerns have evolved.

When you say canvas of themes, how do you feel the concerns explored within your writing have evolved?

I guess as my experience of my outer world and inner world has grown, through travel, reading and reflection, themes became more wide ranging and varied. From ‘encounter’ inspired writing I moved on to ‘issue’ inspired work. Now it’s an amalgamation of the two.

New themes have demanded new styles. For example, the style and treatment used in most of my short stories in ‘Return To Mandhata’ is quite different from ‘Survivors’…and radically different from ‘Notebook Of A Footsoldier’. My poems in ‘Written In Sand’ are far more clarified than those in ‘Hunger’. I have never shied away from experimentation.

These concerns, are they an amalgamation of your personal and emotional location in a particular moment of time or then more to do with the issues surrounding you?

Has some of your work been influenced by reader responses or suggestions to you?

Not at all. I am a doggedly individualistic person.

With your writing career starting with your work for J.S. Magazine, why did you eventually shift away from journalism?

Oh well, I was a young man living in an Age of Upheavals and witnessed both the Naxalbari violence and the Bangladesh war of Independence. As if that was not enough I even volunteered to work in Mother Teresa’s Home For The Dying And The Destitute. Those experiences moved me to want to effect change for the better in the world in which I lived. But pretty soon I discovered that journalism could not do that. It was terribly disenchanting. So I dropped everything I was doing, left behind a job, a readership, a pretty successful theatre career of sorts and set out alone to travel across the country, into remote areas and unlearn everything I had learnt and rediscover my true calling.

You have rekindled that past interest by working with various Pune newspapers, is it something you will always return to?

Not ‘papers’ but yes, a popular paper for which I wrote a weekly column for nearly six years. I chose to do that because through the column I could reflect the life of the city with warts and all. Not in activist mode but as an entertaining commentator. I would love to have the occasional opportunity to do that…but there is little space in my life at this stage as I find myself turning more and more away from the temporal experience.

You have lived in several different cities in your life, starting your career in Calcutta and now living in Pune. Do you feed off the energy of the city you are in?

Yes, in a way. Because every city has its own past, present and future, its own way of surviving, its own way of thriving. A city that is stimulating in what it has to offer but also allows me space to continue to be myself.

Would you associate a particular phase of your writing with a city you have lived in?

Yes, absolutely. I was born in the dusty, cluttered wild west ‘city’ of Kanpur, went on to spend my formative years in the riotously intense city of Calcutta – leaving it for Mathura and Madras, lived briefly during my travels in Delhi and towns in Kumaon, then central and western India then spent an entire cycle of my life in Bombay then went south to places in the Nilgiris and other parts of Tamil Nadu and north to Delhi then back again to Mumbai and on to Pune with innumerable stops in between. I have the nomadic spirit. Earlier, it meant shifting residence but now the shifting and travelling goes on inside me.

Your struggles with your own identity, being from a family of mixed heritage comes out in the writing you have done about the Anglo-Indian community. What change have you seen in your writing since ‘Survivors’ in this regard?

I think I have moved on to writing about in-between and marginal people from various backgrounds and in various situations. Not just ethnically but socially and psychologically. And the good news is that my approach has become more expansive, giving me the flexibility to explore various levels of living.

In your work with tribal communities across India, what compels you to travel and record their folk narratives?

Because I feel that their narratives are an expression of their way of life and their relationship with each other, with the land that they inhabit, their beliefs and their very identity. I have been recording folk narratives and carrying them to non-tribal people through print, oral presentations and advocacy efforts because they deserve to be part of the great tapestry of living India. I am sure a lot of people are doing a lot of work but I nevertheless feel I need to do this. Coming to think of it – maybe it has to do with this deep seated absence of a living heritage/identity in my own life that I am driven to the deepest roots of belongingness that is evident in the life of tribal communities.

Have these interactions with people from tribal communities changed the way in which you see your own location in an urban set-up?

Completely. Though I live in an urban environment, I now have the spirit of a person from a tribal community. I think the essence was always been there, with continuous exposure, that essence has flowered into a psychological manifestation.

The poetry you choose to write shifts thematically from personal experience towards the translation of tribal folksongs, touching upon the theme of nature as well. What has influenced these shifts in your writing?

I don’t see them as shifts but more as approaches to the same ‘theme’. Someone at the Poetry Festival in Chennai commented that there appears to be a deep seamless connection between my poetry and Bhil songs.

After having done theatre workshops across age groups, what purpose do you feel your workshops play in the lives of children when it comes to the sphere of self-expression?

I believe that the educating process should, apart from all else, help a child to find his or her own voice and make his or her own choices. And this should be done in a creative and inspirational way and

not shoved down their throats. Because the act of finding one’s own voice and sharing it with the world and thereby evolving is so like the act of ‘play.’ In an ideal world, the education system should be able to take care of that. But then the system has its own limitations so is unable to deliver. This is where my workshops find a meaning and purpose.

Is this need for self-expression also the reason you have been drawn towards working with special needs education?

Yes of course. Another angle to this, I know what it means to be an ‘outsider’ so I always make an effort to stand up for the outsider.

In today’s day and age with the social climate in India being the way it is, how relevant do you feel your workshops are for children?

Absolutely relevant. I feel that in my own way I am helping young Indians to discover their own identities and creatively assert themselves. In the new world order that is rapidly evolving, you have to start ‘swimming or you’ll sink like a stone (thanks Bob Dylan) for the times they are a changing.’

Do you see a change that has come about in the manner special needs education is given importance between when you first began your engagement with children with special needs and now?

When it comes to writing for children between ‘The Last Jungle on Earth’ and ‘Legend of Creaky’, is there a central vein that runs through your writing?

How did you/what did it take you to reach the point in your writing where you could write a novel instead of your previous literary forms of poetry and short stories?

I see the writing of novels as more necessary for me today than writing short stories. My short stories were like boulders rumbling down a mountain side. My novels are the mountains themselves. My short stories were streams that flowed into a river. My novels are rivers. The shift took me a long time. My first novel was written in the mid 80s in Delhi. When it was complete – I lost the manuscript!! After that I had to wait for the urge to come back. Now it has.

——————————
Check out Randhir Khare’s articles and poems published in Live Encounters
Indigenous Rights – https://liveencounters.net/?page_id=95
Writing – https://liveencounters.net/?page_id=1792
Poetry – https://liveencounters.net/?page_id=3345
——————————
Lavanya Khare, currently a student of Literary Art, Ambedkar University New Delhi engaged with writing from a young age. Her first encounter with the world of writing came when she participated in the creation of a collection of essays titled ‘Girl 13’. The aim of the book was to show the different responses to their own environments through the eyes of 13 year olds across the globe. She moved on then to participate in several other compilations of essays and poetry, beginning with her participation in school and college magazines both in the capacity of editor and contributor.  Alongside her writing, she chose to dabble in the world of theatre, working as a production manager for several different productions, the highlight of her work being the Ibsen Festival in New Delhi. Her interaction with theatre extended beyond simply that of production; as she continued on to participate as an assistant workshop conductor, working alongside her father Randhir Khare in workshops at Prithvi Theatre in Bombay as well workshops with the YMCA Children’s shelter also in Bombay.

Other than her writing, her interests include special needs education, a field in which she plans to both pursue further studies as well as make a career as a teacher. Her love for and interaction with children filters into her writing in the form of several essays she has previously written covering the topics of Children’s Writing as well as a travelogue she is presently working on about the issue of child labour in the city of Banaras.