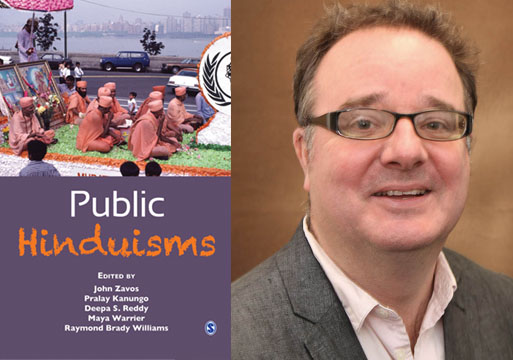 Late in 2005 a controversy unexpectedly surfaced in the everyday procedures of the California State Board of Education.  In the course of a public consultation exercise which forms a regular part of its review of Social Science and History textbooks for use in public schools, the Board ran into some diametrically opposed views about references to Hinduism and Indian history.  The initial protagonists in this controversy were, on the one hand, two Hindu groups, the Hindu Education Foundation (HEF) and the Vedic Foundation (VF) who had suggested some edits to the textbooks, and on the other, Michael Witzel, Professor of Sanskrit and Indian Studies at Harvard University, who had written a letter supported and signed by nearly 50 other academics from around the world, objecting to the involvement of these two Hindu groups. Deepa Reddy, one of the contributors to a recent book entitled Public Hinduisms, takes up the story:

public awareness of the controversy was growing and various groups representing disparate sets of interests began to identify their positions vis-à-vis the issues. …An array of groups joined in the chorus of opposition to the HEF/VF edits; most prominent among these were the Friends of South Asia, Federation of Tamil Sangams of North America, and the Coalition Against Communalism. Their opposition then precipitated further public debate: the Hindu American Foundation supported the HEF/VF edits, as did many other far more loosely organized groups and individuals (academics and others) writing into local media or directly to the SBE.

And so the controversy rumbled on, echoing to some extent a similar controversy that had emerged a few years earlier in India, where the National Council of Educational Research and Training was similarly embroiled in a struggle over historical representations in school textbooks.  The way in which these controversies developed demonstrates a fundamental point about religions and the communities associated with them: public representation is an unpredictable, sometimes fraught process, both framed and influenced by a range of agents, both ‘within’ and ‘outside’ the fuzzy boundaries of the community itself.

The book from which the above quotation is drawn is concerned with this process. It looks at modern Hinduism, and the practices of Hindus in some areas of the world where this religion has a particularly significant public presence. India, not surprisingly, is at the heart of this study, but it also looks at the ways that Hindus have asserted and maintained a public presence for the religion in two key diaspora contexts: the US and the UK, where large numbers of Hindu migrants have settled over the past 50 years. Of course, this is by no means an exhaustive study geographically: Hindus are spread much more broadly than this. But it does provide some critical interventions focused on these three important sites, providing some models for further research on this important and rapidly developing field.

This is an edited volume with a title that challenges the reader to think carefully about the concept at its heart. It purports to study Hinduisms, rather than Hinduism, invoking a plurality justified by reference to theoretical work over the last twenty years or so which has emphasised the constructed nature of the concept of Hinduism (and in fact, of the concept of ‘religion’ on which it is based). Lots of work has looked at the ways in which the varied traditions of South Asia were brought together through a range of discourses in the early modern and colonial period, organised or even, some argue, disciplined by an overarching discourse of religion which articulated those traditions as a religious ‘system’ called Hinduism. This current volume explores how these historical processes have played out in the era of postcolonialism, how the idea of Hinduism continues to be produced in the complex public arenas of the contemporary world.

Not all public representations of Hinduism are as hotly contested as those in the so-called California Textbook controversy described at the start of this article. But more generally speaking, the book argues that the processes involved are implicitly political (often with a small ‘p’), in that they involve the public assertion of particular representations by particular groups; a claim to the power of representation, then, which may or may not be contested, depending on contexts and on the relative power of other groups with an interest. All this may sound rather general, and it has to be so, as the processes that the book theme encompasses are multidimensional, from the birth anniversary celebrations of the Nath Yogi sampradaya (or Hindu sect) in a Rajasthani ashram, to the representations of Hindu deities on underwear, toilets and even chocolates by various US companies.

As this suggests, just as there are a diversity of Hinduisms to take into account, there are also a wide range of public spaces that are potential sites for the representation of religious identities. In the contemporary world of advanced communication and media technologies, the complexity of these public spaces – how they relate to, interact and overlap with each other – is intensified. For example, our understanding of the development of Hindu communities has long been framed by the location of these communities ‘at home’ in India, or ‘away from home’ in the diaspora.

Many of the papers in this book, however, demonstrate that this divide is being progressively breached, as the internet and other forms of virtual public space provide new and critical avenues to representation, which are not constrained by national, or, for that matter, any other geospatial contexts. One organisation which has done much to develop its presence in these environments is the Bochasanwasi Sri Akshar Purushottam Swaminarayan Sanstha, a comparatively modern sampradaya which was established in Gujarat in western India, but now has a global reach and sophisticated internet presence. The book explores this organisation through four articles, including one focused explicitly on its websites.

The importance of politics in the process of public representation means that there is one modern phenomenon associated with Hinduism which cannot be ignored in this book: the ideas and actions associated with Hindutva or Hindu nationalism. The book embraces this challenge, but the approach is influenced by a recognition, gleaned through the many debates that shaped the intellectual approaches in the volume, that this phenomenon has to be comprehensively situated – socially, culturally, religiously. This approach challenges what the editorial group perceives as a damaging faultline in some previous scholarship, isolating the politics of Hindu nationalism from broader developments in the articulation of Hinduism as a religion. The book locates Hindu nationalism in this broader perspective, exploring the continuities and ruptures which inform the relationship between Hindu nationalism and movements and ideas which are not manifestly part of this project. This is evident, for example, in chapters which explore such diverse organisations as the Krishna Pranami sampradaya and the Hindu Forum of Britain, and resonant diaspora ideas like the ‘practising Hindu’. Pathologising Hindu nationalism does not lead to critical clarity. We can only understand its development if we recognise the loose weaves through which it appears in the everyday articulations of Hindu-ness across the globe.

Such insights point to a complex and developing set of ideas underpinning manifestations of public Hinduisms. The project from which this book is drawn seeks to continue to explore these manifestations, not just in and across the three countries that form the focus here, but more generally as a feature of the contemporary world. Recently, I have produced an article on the development of public Hinduism in the context of the European Union, and Europe more generally LINK.

Other recent work on this area of study includes a book entitled The Guru in South Asia: New Interdisciplinary Perspectives LINK. This book is edited by Jacob Copeman and Aya Ikegame, two scholars who took part in the network debates which also produced Public Hinduisms. These developments show how the research agendas explored in the Public Hinduisms project have been sustained, and the steering group is now looking to develop these agendas through further research and productive scholarly debate. Please refer to the network website for news of these developments LINK.

——————————–
Dr. John Zavos is Senior Lecturer in South Asian Studies at the University of Manchester, UK. His recent publications include Religious Traditions in Modern South Asia (2011), co-authored with Jacqueline Suthren Hirst, and several articles on Hinduism and Hindu organisations in the UK. He has worked extensively on the Hindu nationalist movement and is the author of The Emergence of Hindu Nationalism in India (2000). Between 2008 and 2010, he was the principal investigator on the Arts and Humanities Research Council-funded network project: ‘The Public Representation of a Religion Called Hinduism: Postcolonial Patterns in Britain, India and the US’