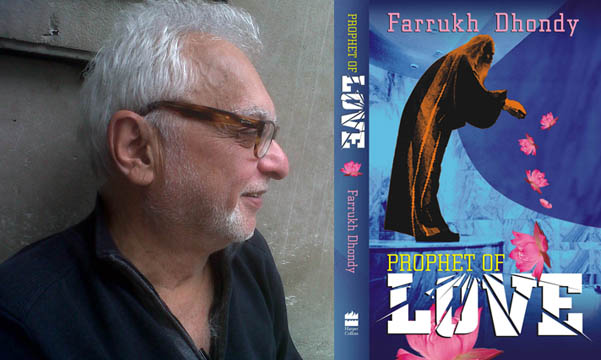 Farrukh Dhondy, author of Prophet of Love, in an interview with Mark Ulyseas
Published by Harper Perennial

The title and setting in an ashram is reminiscent of the ‘heyday’ of the 70s when Westerners flocked to the Ashram of Bhagwan Rajneesh, a self styled Godman, in Pune (then Poona) in search of the guru who spoke of Love…uninhibited spontaneous universal love. It is believed that many such ‘followers’ often referred to him as the Guru of Love…the media called him the Sex Guru. Did you derive your inspiration from this and thus the title reads as “Prophet of Love”? But why Prophet and not Guru?

I have never read any work of Rajneesh apart from stray quotations in newspapers etc. Yes, the story is about a Godman who plagiarises from and simplifies the work of several traditions so those who don’t want to do any serious study can relate stray ideas to the mundane circumstance of their lives. A guru imparts wisdom that has been gained and tested. A false guru talks nonsense. A prophet prophecies and since love and the future are uncertain it was the most appropriate title. It could have been called the Prophet of Sex but my publishers thought it would put off potential readers who think they are in the love rather than sex camp.

Is this novel an honest mix of fact and fiction? I ask this question because it is said that your novel The Bikini Murders was loosely based on the ‘murderous activities’ of Charles Sobhraj?

As with most fiction, Prophet of Love has its origin in my experience. I did go on a journalistic mission to research the activities and proclivities of an ashram and I did have aunts and friends in Pune. I did meet several characters there and have now; years later twisted them imaginatively into fiction. None of the characters are actual portraits and none of the action is a factually accurate account of real events.

It is also believed that many followers fell afoul of Bhagwan Rajneesh aka Osho and his coterie and thus paid the price by being banned from the ashram…in a sense being derobed (the followers wore the uniform of the ashram– maroon colour robes similar to Buddhist monks). Is the story of Diamond aka Ma Vidhyadhari representative of this reality?

I have met people who dissented from one cult or the other and were expelled and even punished for it and yes, Diamond is such an one.

Why did it have to be a young journalist that Diamond approached to help rescue her daughter from the ashram and not her embassy or another Westerner?

The novel doesn’t give the reader any certainty about Diamond’s nationality. Does she have American or Israeli citizenship? Would she appeal to an embassy rather than a journalist boyfriend who had befriended her? Is her story true? Does she have a child held by the ashram. The prophet says she doesn’t and in the end she doesn’t mention the child.

Did you write this novel because you wanted to expose the seedy underbelly of the goings-on in some ashrams that every-body knows about but refuses to acknowledge because it has to do with a portent concoction of faith, spirituality and sex?

Yes. I wanted to tackle a universally known reality about contemporary India. And yes, I remain unconvinced by the spiritual quest and by godmen, but that needn’t apply to the reader. I didn’t write it to convert anyone spiritually, only to convert my publishers into greater generosity with advances and percentages.

The role of the guru in your novel appears similar to the role of a guru in reality…an unquestionable power that he exerts even on politicians and business folk, in general. Was this intentional? And what do you hope to achieve with this depiction? To set the record straight?

I haven’t directly incorporated politicians and business folk in the story. I do strongly believe that those who are elected in a democracy ought to follow discernible laws and accountable disciplines and not the ramblings of irrational cultists. I don’t know if fiction can ever ‘achieve’ anything apart from imparting the possibilities of life and thought to the reader and entertaining him or her through the force of narrative or drama or even accuracy of ear such as Kipling has or twists of invention such as Salman exhibits.

Why in your opinion do Westerners still flock to gurus in India? Have their cultures failed them or are they attempting to escape from their own inadequacies to seek shelter in ashrams, far from the madding crowd?

I have met Western Buddhists who ignore the fact that Buddhism is atheistic and non-material and believe that chanting will bring them worldly goods (lots!) and prosperity and power. Very many victims of cults want to be controlled by a ‘philosophy’ and assume the disciplines of a religion or a cult which gets them away from the indiscipline or even chaos of their own lives. Think of Malcolm X who was a self-confessed thief and pimp before he found the discipline of Islam which made him abandon his criminal existence and pray five times a day – of course he grew out of it and came as close to Marxism as a very practical American leader can.

Would you agree that gurus of the Hindu persuasion always appear to be in the majority and one never seems to hear about gurus from other faiths? Why is this? Has this got to do with the perceived ‘exotic’ spirituality that does not have a formal organisational structure and relies solely on a guru to dispense spirituality in a subjective manner that is palatable to those seeking emancipation from a material world – one on one with a godman?

In Britain the ‘godmen’ one hears about are Islamic preachers who get a following of would-be jihadis. The Hindu cults exist but they are quieter and go about their business without bombing people or slaughtering soldiers on the streets of London. There are of course gurus of the internet age who are amateur philosophers and sometimes open frauds who charge you money to tell you to stay silent for ten minutes a day and breathe deeply or concoct more complicated formulae to convince you that you are being redeemed. Hindu ideas and stray terms such as Yoga assist them in convincing people that their prescriptions have tradition and ancient wisdom behind them.

Why do you write?

Four anwers:
To earn a living
To find out what I think
To win the respect of people I respect
Why do bees make honey?

Two screenplays, a stage play and I have two prose manuscripts drafted and waiting to be published.

What is your message to aspiring writers?

Don’t imitate any modern writing and don’t write ‘for yourself’- that, like blogging, is for amateurs.

Farrukh Dhondy is a screenwriter, playwright and bestselling novelist. Born in Pune, India in 1944 he went to school and college in Pune and then to Pembroke College, Cambridge. He graduated in ’67 having read Natural Sciences and English. He went on to do a thesis on Rudyard Kipling at Leicester University and then taught in various London schools. He has written several books including The Bikini Murders which was on top of the Indian bestseller lists for three weeks, Bombay Duck,Poona Company and the screenplay of Split Wide Open among others.