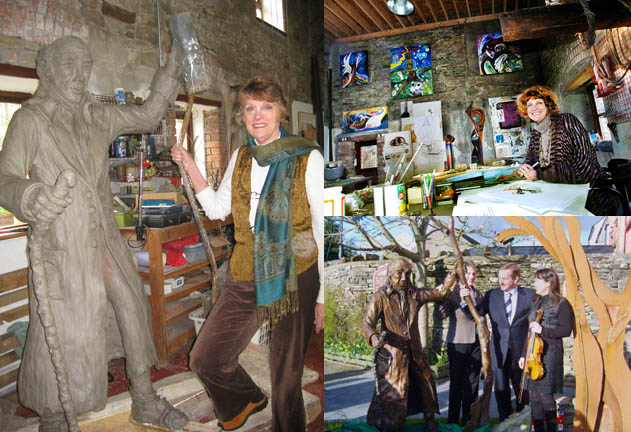 “A society without art is an undocumented society.

All the great civilizations are known through their writers, musicians, painters, sculptors, architects. It is only in retrospect that we know what art will be significant to remember.

Much modern art requires a heavy interaction with the intellectual process.

In the past artists had been formative figures in the development of the society they lived in. They were watch dogs and innovators and not just singularly motivated. So much of art chosen by the Arts establishment is just not relatable.

The average person just has to shake their head. I call it a case of the Emperor’s New Clothes when I see some of the work chosen today for the big prizes. Art has to have guts and some devotion to an aesthetic. There are many levels that need to be activated when interacting with an art form.

If thinking is the main receptor then, to me, it is failed art and relevant to the artist but not necessarily to society.” – Sally 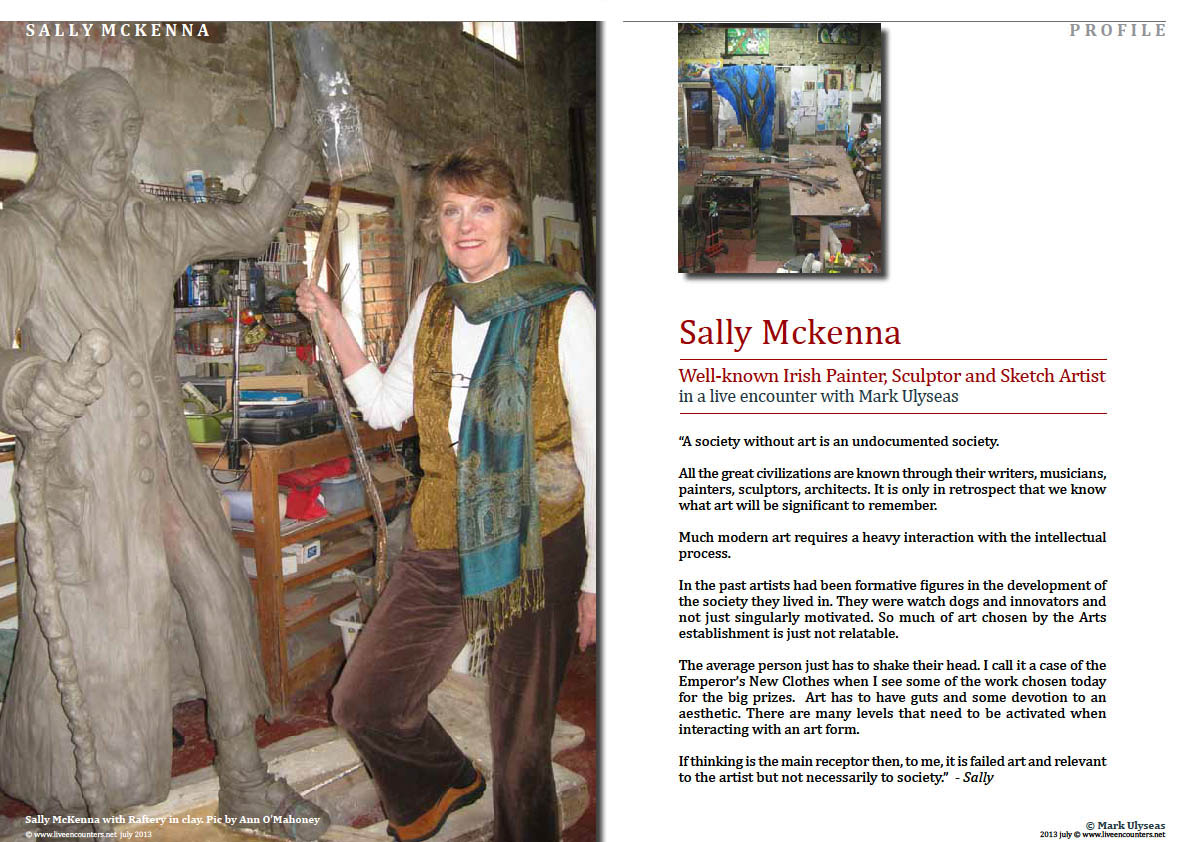 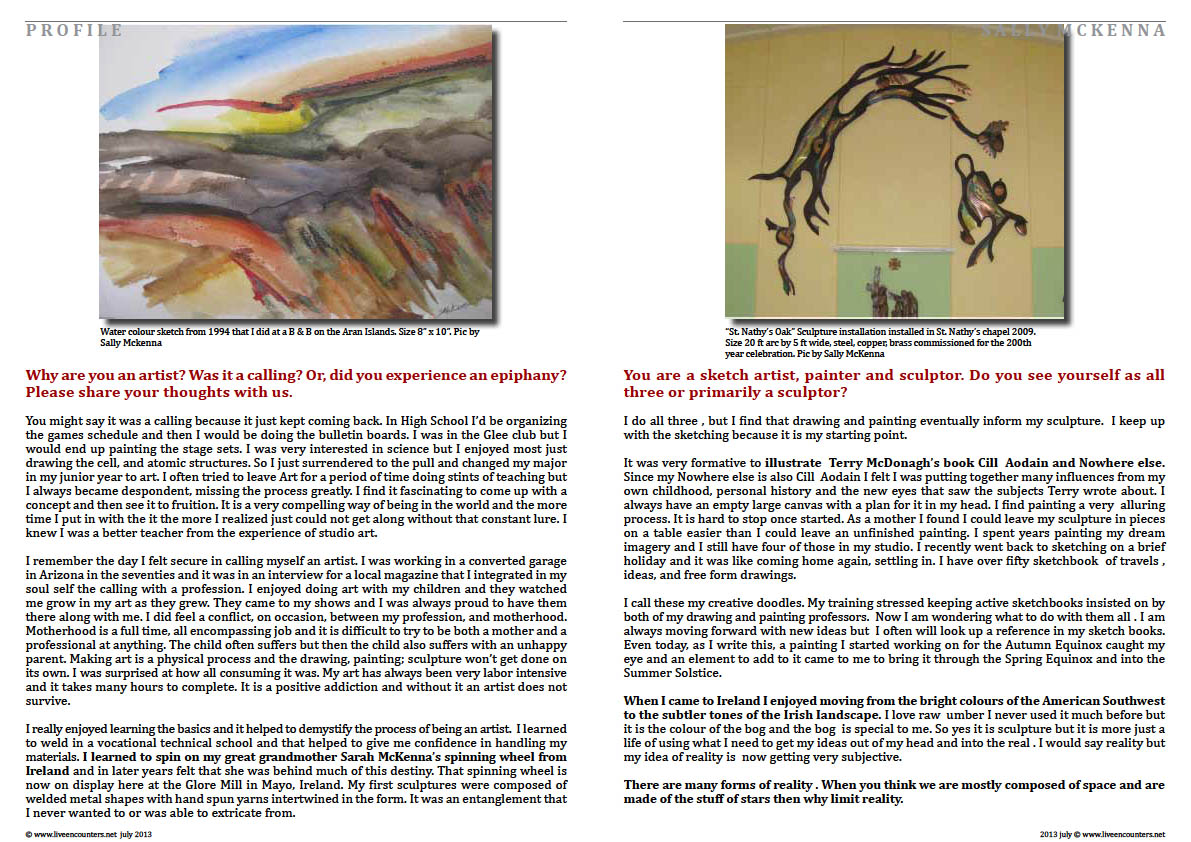 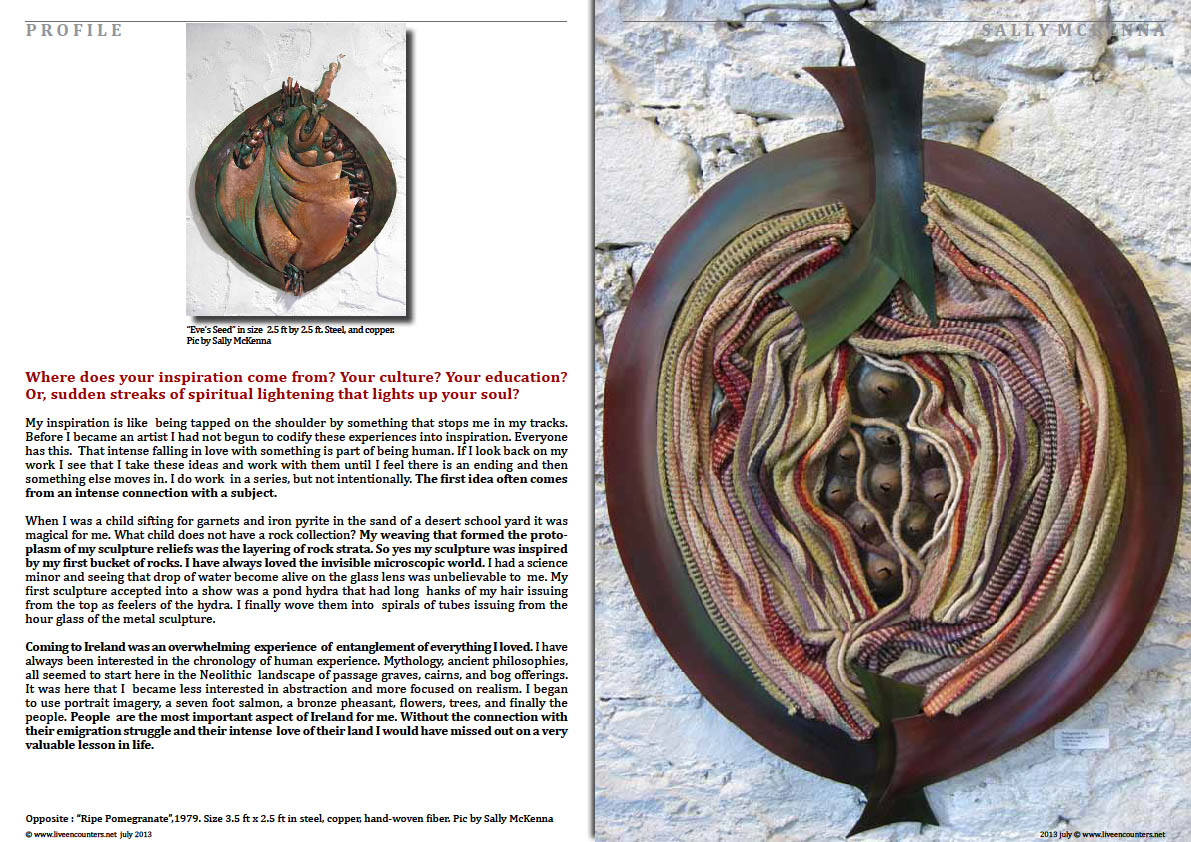 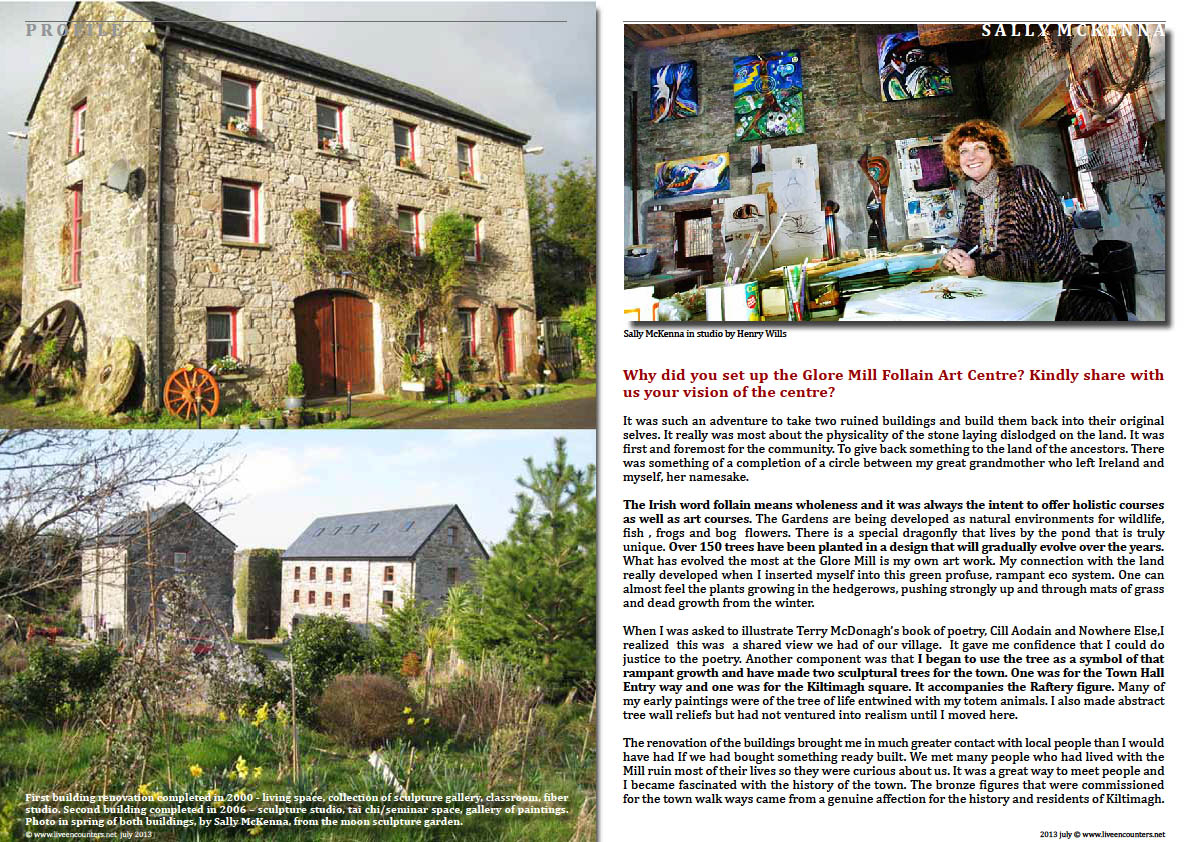 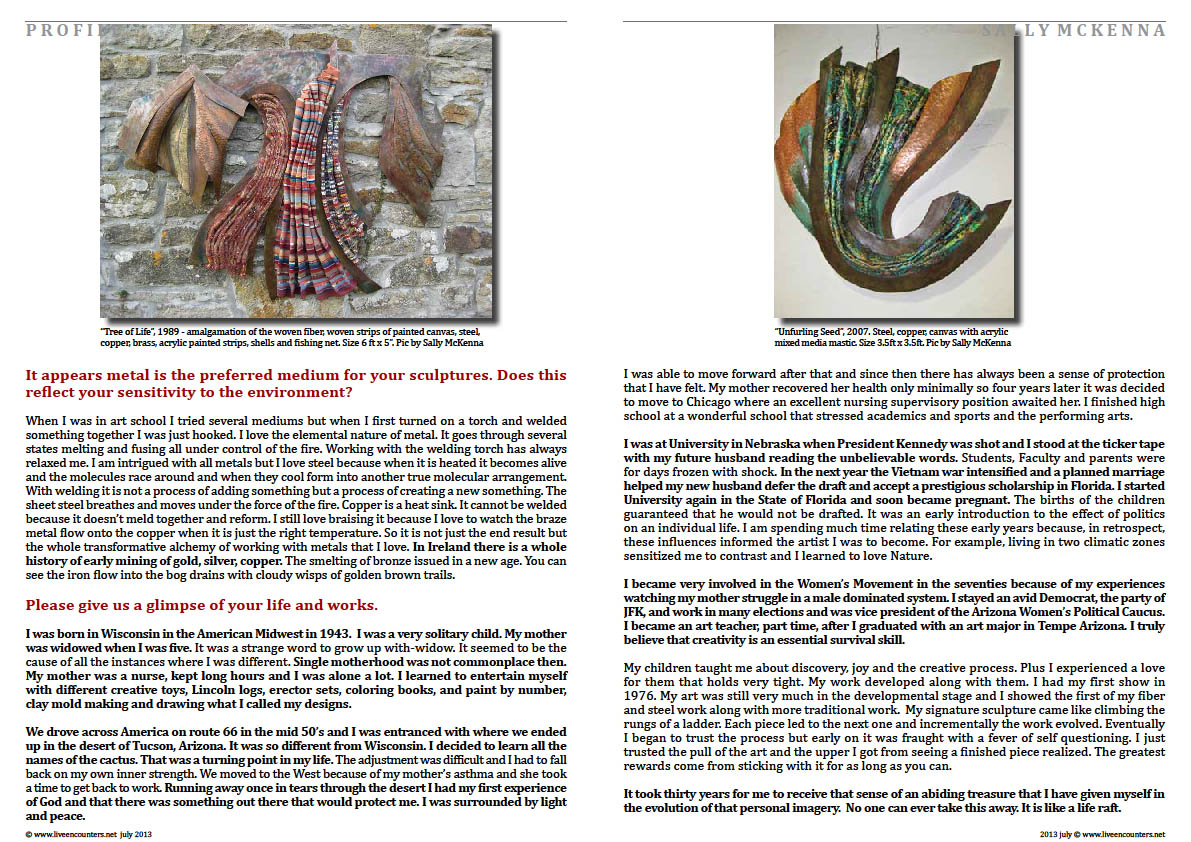 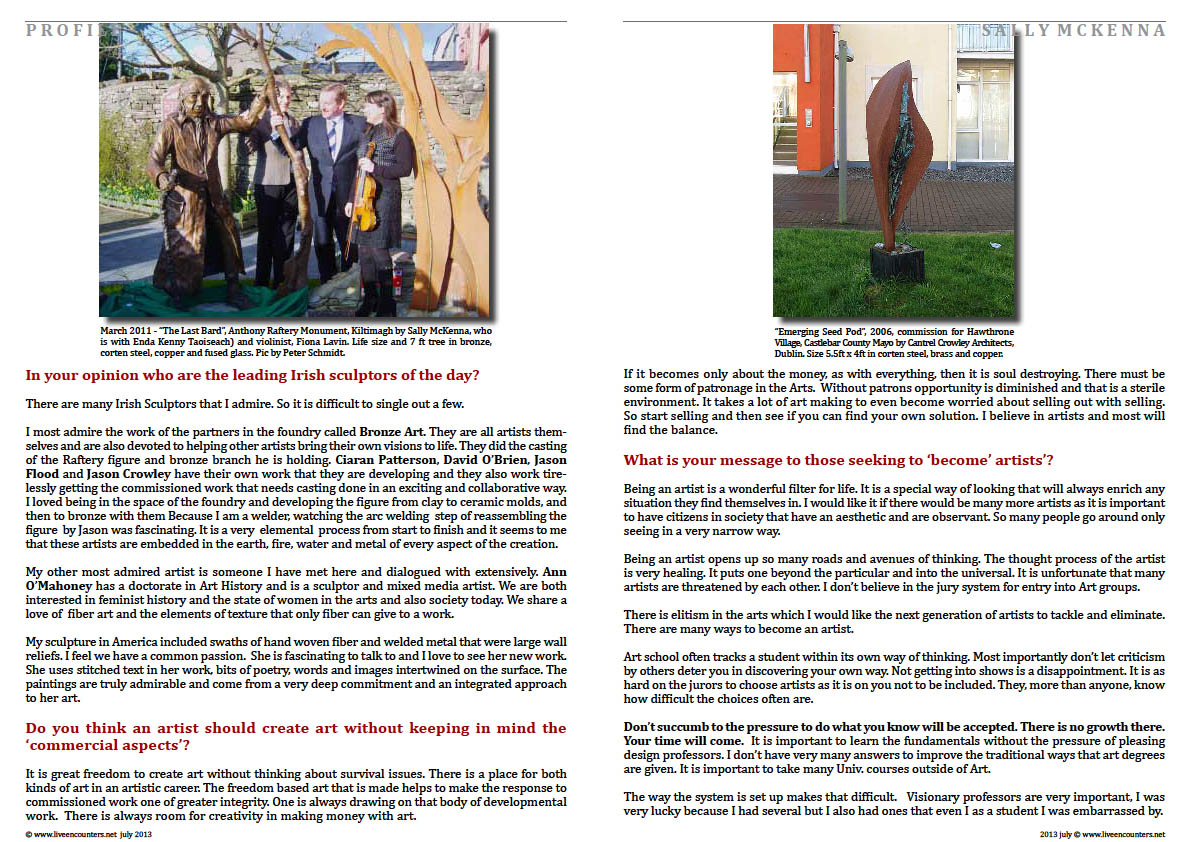 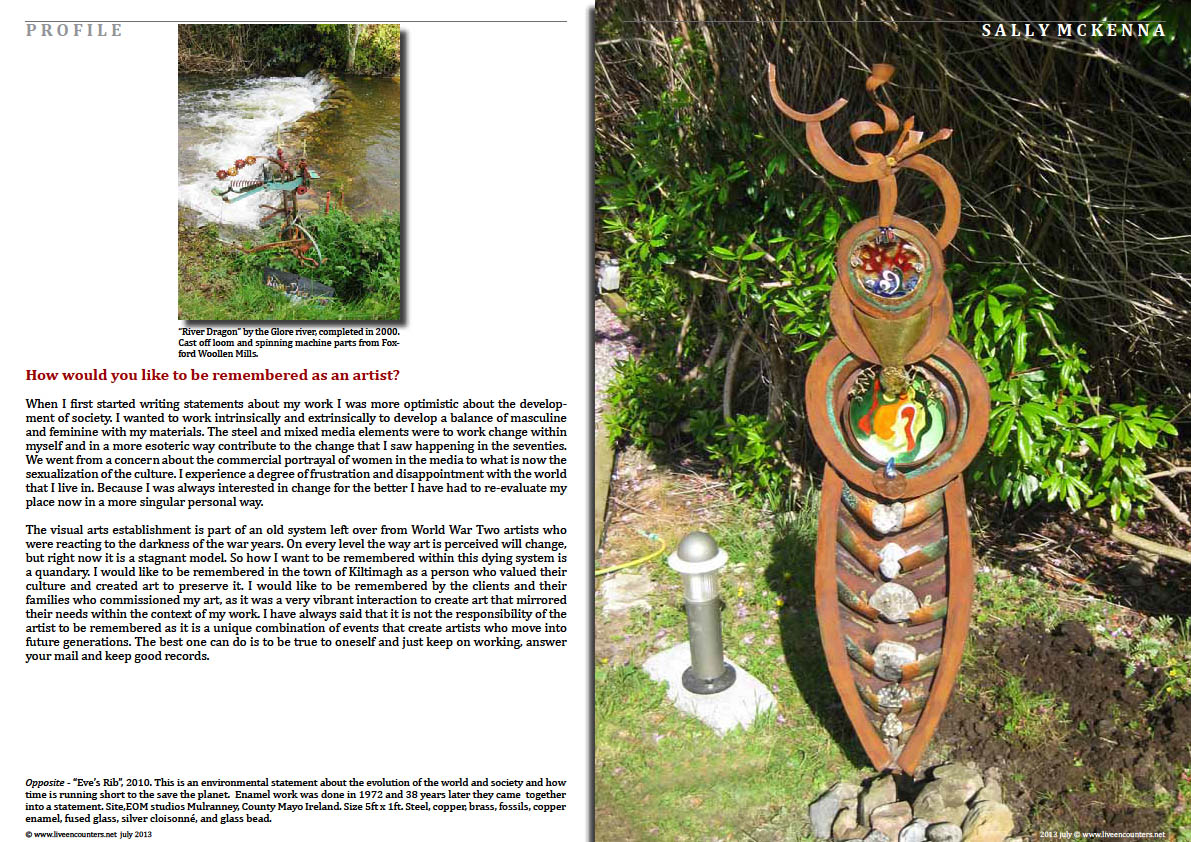 Sally McKenna is a painter and sculptor. She missed being a flower child by a few years, but the anti-Vietnam war peace movement instilled a societal awareness that never left her. She has a great love of community development. She founded the Fine Arts Centre of Tempe, Arizona at the request of the mayor and the city council in the early eighties.   Her involvement in community began in the seventies with an active participation in the Women’s Movement, and the Arizona Women’s’ Caucus for Art. She married early (in the sixties) and had her son and daughter while continuing her college studies. It was there that she became acutely aware of the differences in the treatment of women art students and male art students. Women were not considered serious potential artists. She persevered in what was a difficult and an often denigrating experience. While attending graduate courses she became a charter member of a woman artists and professors group titled WIN, Women’s Image Now, which sponsored their own art shows and published a yearly magazine.

After graduating in art from Arizona State University, more than 40 years ago, she began the task of putting her ideas into sculptural form. She is committed to making beauty and strength walk together.  For years her wall sculptures, comprised of hand woven fiber and encased in steel, were collected by major corporations.  The societal challenge of integrating male and female equally was mirrored in the art and the challenges society faced. Her sculpture is a mixture of different media. Her early themes were of the geological layering of the land. Her first works were microscopic pond life, hydras, and twin paramecium and amoeba wall sculptures. Then followed a strata series and a boundary split series made from steel door window cut outs found in junk yards. She cut out plowing discs and filled them with hand spun and woven fiber tubes.  She named the piece after the two faced god Janus and sold it to a bank in Vermont. (prophetic for the seventies)

Next she evolved an interest in the Well Spring, as a source of purity and the Tree of Life. If there were historical myths that spoke of Divine history/ mystery they became mixed in tandem with the scientific observations. She invented an amalgam of sheer nylon, paper, feathers and acrylic paint called veiled paper which she used in many commissioned pieces and in her biographical plexi-glass encased story landscapes called Dream Boxes. In all, she has completed over 200 commissions both public and private.

After visiting Ireland she became interested in the myths issuing from the land. For the J.F. K. Memorial hospital in New Jersey she included large swaths of hand woven fiber and painted canvas in a piece which incorporated the rings and pathways of the Hill of Tara. She designed a large scale sculptural piece for the Sun Princess Cruise ship that had as its theme the magical belt of the Irish Sea God Manannán mac Lir I called the crane bag.

In 2000 Sally realized her lifelong dream of creating her art in Ireland. An ancestral pull triggered her love of the land on her first visit in the mid nineties. A decaying, roofless old mill on the banks of the Glore River was discovered in 1998. It was personally financed by mortgaging the family home and funded with development and conservation grants. The Mill is now a teaching space, tai chi, xigong class room and a studio for the artist. The summer of 2013 on July 19th will host the 2nd International Weekend Retreat on the Healing Aspects of the Dao and Sun and Moon Alchemy.

The town of Kiltimagh, where she lives in county Mayo, is called the Artisans town on maps dating from the early 19th century. To keep that tradition alive Sally’s love of history and the family values of the Irish home are being portrayed in a series of life size bronze figures on the Main St. The latest one is of a life size bronze figure and a seven foot corten steel Hawthorne tree. The figure is an 18th century poet, treasured in Irish folklore, of Antony Raftery, who was born in Kiltimagh. Literary festivals, an artist’s retreat, and a sculpture walk are being developed for the citizenry and to bring visitors to Kiltimagh by the town’s Integrated Resource Development Centre.

Her recent work comes from walking the banks of the Glore River and the Beaches of Mayo. Still evident on the ground are the fossilized sponges and coral from billions of years ago when Ireland was a tropical sea. “My current interest is the evolution of life and the progression that is seen in the fossil record.” The first two pieces of the series have been collected by EOM Studios in Mulranny, Mayo Ireland. “Eve’s Rib” is a mixed media freestanding sculpture that is a ladder/rib cage of fossils, glass enamel on copper with cell dividing imagery, a brass crucible holding a water whirl of fire and cast glass and finally the hands of a clock midst an intertwining spiral. She is currently working on a wall relief that has elements of sacred geometry that she became interested in during her recuperation from chemotherapy and a bout with cancer. It incorporates a six inch ceramic vessel with the seed of the human child curled in its centre issuing from a base of fossils. The diagnosis of a life threatening illness gave her a greater sense of the immensity of the many streams of life on the planet.

“Having cancer has made me love the Earth even more. I have a deeper sense of connection with all life forms and it all seems imbued with a sense of giftedness.” Since 2011 living with cancer leaves behind multi layered slow motion creativity. The illness informs each moment with a future ambiguity much more that the usual certainty of death can bring. It is an ever present shadow and grace.