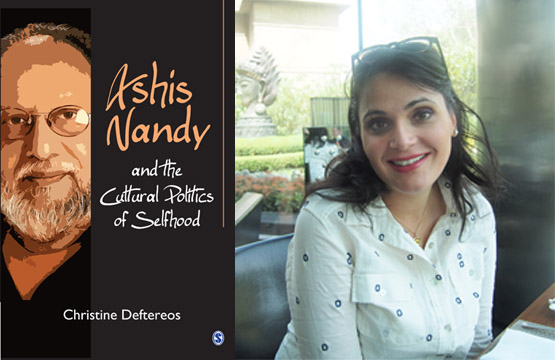 Christine Deftereos, Social Theorist and Author of Ashis Nandy and the Cultural Politics of Selfhood in an interview with Mark Ulyseas. (Published by Sage Publications)

“Ashis Nandy has been described as ‘bigger than most pop stars in India!’ His voice is synonymous with original critique, with a forty-year presence in public and academic debates. His prolific contributions across a range of topics remain uncompromising. These include Nandy’s consistent critique of western modernity; the political culture of the Indian state; the postcolonial condition; the politics of knowledge production, including the epistemic violence of colonial dispossession; an increasing global and homogenizing ‘culture of commonsense’ and the Indian middle classes who remain complicit in these processes. Widely regarded as one of the most important Indian thinkers of his generation, and internationally recognized with a number of accolades, he is someone who has contributed to a number of important debates. Moreover, Nandy’s work has turned the direction of those debates completely upside down! He presents alternative perspectives that are radically confronting, uncomfortable and very difficult to hear for a number of different reasons. Nandy also takes a number of positions on a range of topics that continue to provoke and remain divisive. These positions can be experienced as a personal assault, as quite literally an assault to our preferred understandings of our selves and our societies. As an assault to our ego ideal, so they can be experienced as a threatening attack to the knowledge we hold dearly about ourselves, for instance, what it means to be ‘Indian’ and to be a ‘modern secular political subject’ and so on. His comments on caste corruption at the Jaipur Literary Festival earlier this year are a case in point.” – Christine

Dr. Christine Deftereos is a Social Theorist based in Melbourne Australia whose writings explore the relationship between self and society. Her research interests take place at the intersection between contemporary social and political criticism, psychoanalytic theory and the politics of selfhood. With a specialized interest in postcolonial identities, trauma, memory and South Asian politics, her work also explores processes of identification and the limits of identity politics. Christine has taught at The University of Melbourne in Politics, Sociology, Social Theory and Foundation Studies programs.