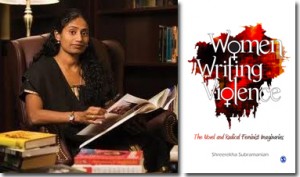 Twentieth century has been a century of grand-scale massacre and violence at its most extreme. In the wake of September 11, 2001, my first semester as a graduate student at Rutgers University, as I underwent my studies on violence in the nineteenth century novel, I was immersed in thinking about absence. What happens to the voice of the absent? The dispossessed? The disenfranchised? Perhaps my book is about ‘hauntings’ in general.

For people of the global south, and women in general, these are not new questions. However for me, I was interested in meditating on absence and the way that the absent also exert their voice and agency upon communities of the living. For women, staking a place at the center while being quarantined at the margins is an age-old habit that somehow, I might have made into an episteme toward writing my book.

I wrote this book to think through and arrive at the radical potential coded in contemporary novels from the Americas and South Asia. I wished to make transnational connections that brings together and house disparate texts under one roof of a liminal community of both the living and the dead. And I wished to center the questions raised by those who have been divested of all the rights putatively promised to human beings in many nations of the world today – right to nourishment, shelter, safety, and life.

I wished to also push against the academic industrial complex which remains still very Eurocentric and center the theorizations and ideations posed by Toni Morrison to tether my argument. Instead of continental philosophy, I excavated Morrison’s 1997 novel, Paradise, for a theoretical paradigm that brings together very disparate women’s worlds together under an African-American literary imaginary.

Shreerekha Subramanian is an Assistant Professor of Humanities at the University of Houston-Clear Lake. She teaches courses in humanities, literature, women’s studies and cross-cultural studies. She is the first recipient of Marilyn Miezskuc Professorship in Women’s Studies in 2008. She finished her doctoral work in Comparative Literature at Rutgers University where she received awards for distinguished contribution to undergraduate education and teaching. She co-edited Home and the World: South Asia in Transition (2007) and has published chapters in several anthologies such as The Masters and the Slaves: Plantation Relations and Mestizaje in American Imaginaries and New Essays on the African American Novel, and also articles in academic journals.