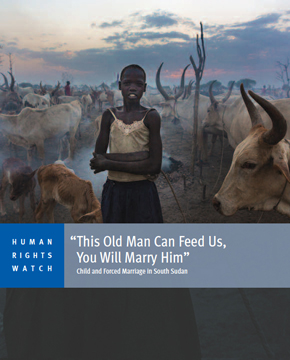 (Juba) – The government of South Sudan should increase efforts to protect girls from child marriage, Human Rights Watch said in a report released today, on the eve of International Women’s Day. The country’s widespread child marriage exacerbates South Sudan’s pronounced gender gaps in school enrollment, contributes to soaring maternal mortality rates, and violates the right of girls to be free from violence, and to marry only when they are able and willing to give their free consent.

According to government statistics, close to half (48 percent) of South Sudanese girls between 15 and 19 are married, with some marrying as young as age 12.

The 95-page report, ‘This Old Man Can Feed Us, You Will Marry Him:’ Child and Forced Marriage in South Sudan,” documents the consequences of child marriage, the near total lack of protection for victims who try to resist marriage or leave abusive marriages, and the many obstacles they face in accessing mechanisms of redress. It is based on interviews with 87 girls and women in Central Equatoria, Western Equatoria, and Jonglei states, as well as with government officials, traditional leaders, health care workers, legal and women’s rights experts, teachers, prison officials, and representatives of nongovernmental organizations, the United Nations, and donor organizations.

One Reply to “South Sudan: Child and Forced Marriage”