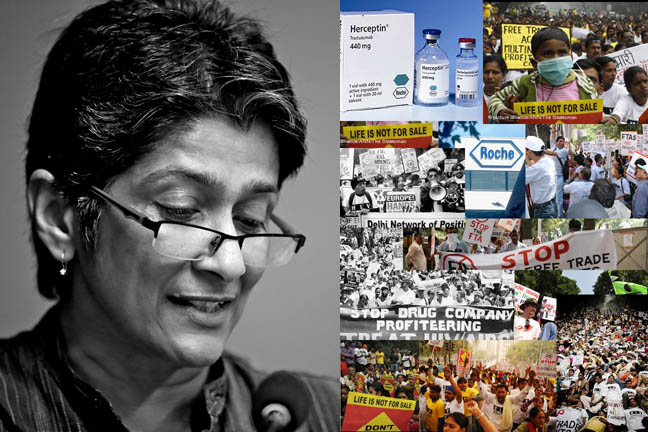 In November 2012, Indian activists launched the Campaign for Affordable Trastuzumab with a letter to the Prime Minister signed by over 200 cancer survivors, health rights groups, women’s groups and human rights groups from India and several other developing countries, demanding compulsory licensing for Trastuzumab. The campaign presented compelling evidence to expose Roche’s predatory pricing policy and use of unethical practices to protect its monopoly. For instance, the Emcure deal exploits market segmentation by selling the same drug under two different brand names for different prices – Herceptin (Roche) at US$2400 per dose, and Herclon (Emcure) for US$1500 per dose. Moreover, it is rumoured that the Roche-Emcure deal incorporates stringent conditions such as a ceiling on the volume of sales and a minimum “floor level” profit margin. Campaigners have also collected evidence of a nexus between Roche and doctors in private hospitals – patients are being pressurised to buy the drug from the hospital pharmacy at the official price of US$1500 per dose, rather than from retailers and agents who offer the drug at prices as much as 25% lower. The “discounted” price of US$1800 at which Herceptin is procured by government entities such as the Indian Railways and the Central Government Health Scheme, is also higher than the price offered by retailers.

The arguments presented by the campaign have been validated by an Expert Committee of the Health Ministry, which has recommended immediate compulsory licensing for Trastuzumab and two other cancer drugs. The recommendation, submitted in February 2013, has been under consideration by the Department of Industrial Policy, the body that is empowered to issue a notification for compulsory licensing. Meanwhile, there are indications that Roche is using its entry to policy circles to counter the threat of compulsory licensing. Even as the Ministry of Health recommends compulsory licensing, another arm of the government, the Department of Pharmaceuticals under Ministry of Chemicals and Fertilizers, has floated a proposal for negotiating with patent holders for bringing down the prices of patented drugs.

The Campaign for Affordable Trastuzumab is strongly opposed to negotiated price reductions. Global experience shows clearly that such measures do not result in any significant expansion of access, since prices continue to remain beyond the reach of most citizens. A case in point is Brazil, which tried to use price negotiations with multi-national pharmaceutical companies to bring down the price of patented HIV drugs. As a result, the price of Efiverenz (Merck) came down to US$760 per person per year in 2003. In contrast, when Efiverenz was brought under compulsory license in 2007, the price came down to USD170 per person per year, which is less than one fourth the negotiated price.

Read More…Profiting from Pain – Campaign for Affordable Trastuzumab takes on Roche in India, an exclusive by Kalyani Menon-Sen

Kalyani Menon-Sen is a feminist researcher and activist whose work explores the impacts of neoliberal economic policies on women. She has contributed to critiques of urbanisation policies in India and is closely involved with struggles against eviction and dispossession of the working poor in Delhi. She has written and campaigned extensively on issues of violence against women, particularly state violence and its linkage with economic policies.  kmenonsen@gmail.com      http://feministsindia.com/