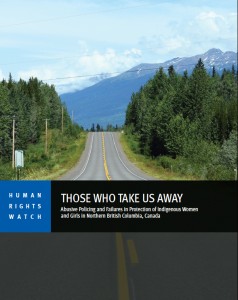 The 89-page report, “Those Who Take Us Away: Abusive Policing and Failures in Protection of Indigenous Women and Girls in Northern British Columbia, Canada,” documents both ongoing police failures to protect indigenous women and girls in the north from violence and violent behavior by police officers against women and girls. Police failures and abuses add to longstanding tensions between the Royal Canadian Mounted Police (RCMP) and indigenous communities in the region, Human Rights Watch said. The Canadian government should establish a national commission of inquiry into the murders and disappearances of indigenous women and girls, including the impact of police mistreatment on their vulnerability to violence in communities along Highway 16, which has come to be called northern British Columbia’s “Highway of Tears.”

One Reply to “Canada’s Highway of Tears”