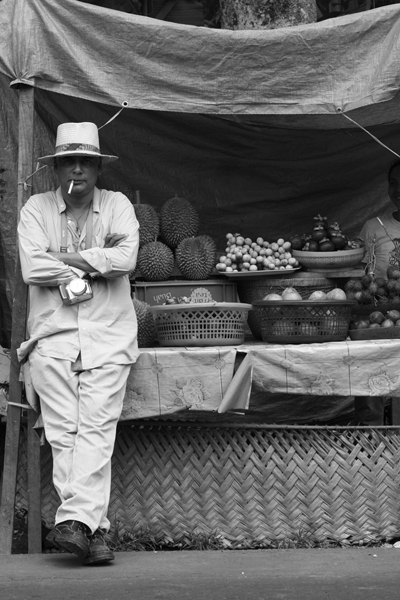 The Loneliness of a Writer – Mark Ulyseas

Somewhere in Bali: This is about the author of this column who arrived on the shores of Bali to complete his unfinished book and to write for publications in other countries. Many years down the line the words seem to flow in all directions creating a brand new world for him with the ever-shifting sands of time. The island embraces him like a mother breast-feeding her child. The kaleidoscope of a vibrant culture with its beautiful people gives him the adjectives to write down for posterity stories of the here and now. He is afraid that he will die one day without sharing all the wonderful things he has seen, felt, tasted and communed with; for it will be lost forever in the darkness of space.

Arriving from London, he walked Kuta beach in search of people. Amidst the cacophony of civilisation gone mad he reached out to those who existed on the nectar of hope; hope for a better life through connubial joy with people from far off lands. The sunrises and sunsets darkened his skin and grayed his hair. The sea air tasted salty on his lips as he gazed out to sea while sitting on a beach pulsating with human life. He was the outsider in a world that was teeming with life.

His first acquaintance was a Kuta cowboy who shared with him the sweet sorrows of parting; the many loves that had come and gone along with fading dreams of ever finding a partner to dwell and procreate with. This was the first lesson given to him by Bali. He knew then that the call of the wild life would take him away from the path well trodden and into the mouth of the beast that slowly ate his life away; gnawing at his soul and forcing him to chronicle the images his senses recorded.

He dwelt in a room made of wood surrounded by a lush tropical garden full of flowering plants. The uninvited guests were the geckos that serenaded him every night. An army of ants would raid the unwashed dishes as he lay in bed watching the shadows of flying insects dance across the ceiling while sucking on his cigar and blowing plumes of smoke into the air.

Words were his friends for they never failed him; unlike the new found love that appeared in his life like the smell of fresh earth after the first monsoon rain. She hung around like an animal in oestrus enticing him away from the writing at hand. It was a momentary lapse of concentration that scrambled his brain and tied his tongue for he could not remember the word called love.

As the months passed and the year came to an end she grew weary of his loneliness and walked away. The elixir of love had eluded him for he was not looking for it but was trying to define it in words.

And as one story ended another began as he drove across Bali in search of new vistas that would open him up to another string of accidental encounters with people. He found it along a rocky coast in the simple life of the rural folk who had nestled on the hillsides.

Many travellers he did meet to the sound of music on Saturday nights. The intoxicated amorous youths that he befriended on the way caressed his ego and ignited an aging heart. The words came thick and fast. The smell of newspaper ink on his hands was an aphrodisiac that aroused within him the desire to belong to a living-breathing world of sensuality. There were intimate moments of indiscretion that cried out for coherency and lasting continuance.

Sadly this did not happen for life had dealt him the card – the joker in the pack of cards. People saw him laugh, cry, dance, sing and speak loudly above the accepted decimal limit and they mistook this for a party animal. The façade was perfect for it had closeted him in a world of past, present and future (continuous) participles.

In between the times of travelling alone, he communed with the wild dolphins off the coast watching them play in the wide-open sea. The sense of freedom and joy inspired him to reach into the deep recesses of his mind to translate the images into words.

The change of season cajoled the spirit within to venture out into the world of warungs and the midnight runs on the bars that dotted the isle. The many blurred faces of people from around the world congregating at these digs added spice to the stories he narrated to voracious readers. He had immersed himself in the cauldron of wasted lives so that he could breathe life into them with the printed word. Their lives became stories for others to read and to ponder the rationale for living in a paradise that was peppered with paradoxes.

In the ensuing inebriation he found a muse. She was like the Lady of Shallot waiting for Lochinvar to come out of the west. The rush of adrenaline caused havoc with his syntax and grammar and brought with it yet another loss of memory – the meaning of love.

The muse wavered ever so often between the men she loved. It was a cruel parody of life of which he was a passive participant. He imagined that she would become a part of his novel but yet he did not want to take her home.

The feeling of returning to an empty room was a luxury that was not to be squandered in the heat of the moment. When her words became invasive and there was a danger of it intruding into his world of the lexicon he walked away for fear of belonging, belonging to someone else’s biography.

It has been a long trudge through the fields of muddied thoughts with insanity lurking in the shadows on a full moon night and the haunting cries of wounded souls searching for the ultimate paradise.

In between bouts of manic travelling, he returns at nightfall to his room to ponder the many days’ events and to unravel the inconsistencies of existence and the paradoxes that confuse and confound him and the people he encounters. Then as if on cue he regurgitates it all onto paper.

The only sound that can be heard is the pen drawing a montage of words. While the slices of cheese and stuffed olives accompanied by a cold glass of wine calms the rising desolation he feels – the loneliness of a writer.

Published in my column Paradox in Paradise, The Bali Times,  2008. Nothing has changed.