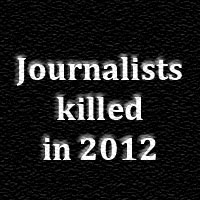 Syrian violence contributed to a sharp rise in the number of journalists killed for their work in 2012, as did a series of murders in Somalia. The dead include a record proportion of journalists who worked online.
A CPJ special report
Published December 18, 2012  © www.cpj.org