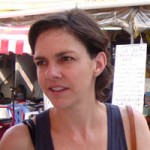 ‘What have you achieved by writing this book?’ The question came at the end of a discussion with a year 1 class about writing, editing and revising narratives. The questioner was my own six year old son, with whom I had never really talked about my work including the two books I have published since he was born. It was simply a great question to ask a writer, who is indeed so often caught up in the process, in the depths of the research and in working and re-working the prose, with barely a moment or perhaps more accurately, the courage, to consider the wider purpose or outcomes that may emerge from all of it.

The books I showed to the year 1s share some common themes. They are both about Indonesia, especially its politics; but of most interest to the year 1 children, and a subject about which they became most animated, was that these are stories are about people who are different, who might be considered ‘outsiders’ within the communities in which they live. For a group of twenty or so Australian children, an understanding of difference – cultural, religious, ethnic – does not require great effort. For many of them their parents or grandparents had come from another country before settling in Australia. Moreover, this class of six and seven year olds were familiar with the terms refugees, asylum seeks and migrants having read Anh Do’s great children’s book about his experience as a Vietnamese child refugee coming to Australia in the 1970s, The Little Refugee, and from listening to their parents’ conversations about Australia’s ‘boat people problem’. I was impressed not only by their awareness of these themes, about which many adult Australians would be entirely ignorant, but also of the careful thought they gave to the issues. In particular the empathy they could employ in order to better understand the quite serious and major themes in my books (anti-Chinese violence, racism, the Holocaust, forced displacement).

So when Ernest, my son, asked me to consider what I have achieved by my writing I was confronted by my own position in the business of writing and representing histories, including some of the darkest acts humanity enacts on itself. What, indeed, was the point of writing this all down – the lives of others, the politics of others, the histories of other places? As so often is the case, it is the questioning of children, which forces us to boil our intentions, motives and actions down to their essence. ‘Well, now the book is there anyone can go to the library and take it from the shelf and read a story about another person, another place and another time. You can begin to imagine the lives of others and how the world works. This book might lead you to want to read another book and then another.’

Too rarely are academics and journalists – as purveyors of ‘knowledge’ – called on to consider the impact of their work beyond the required ‘outputs’ demanded in their increasingly competitive and commercially driven workplaces. One of the books I showed to the year 1 class, is a biography about a man, Herb Feith, who, although an academic and ‘expert’ of world renown in his field, more or less chose to forgo a path of promotion and acclaim, to commit to a life of peace activism and knowledge-sharing. It was far from a selfless decision though – he viewed his self-worth through what he could do for others, the difference he made in the lives of his Indonesian, East Timorese and Burmese friends, rather than in material gain. The only regret he perhaps may have had and I know his colleagues had, was that he did not write more so his teaching and great experience and intellect could reach an even wider audience.

Who knows how he would have viewed the social media revolution we are experiencing today – but I predict he would have been utterly energised and enthused by its possibilities
of communicating ideas across national borders and between peoples wherever they are. I like to imagine that uninhibited by the constraints and peer-revisions of writing for the academy Herb Feith would have been a prolific blogger.

The opportunity for individuals to contribute ideas and opinions and to reach a potential worldwide audience is revolutionary, but at the same time it is essential that ‘expert’ opinion and knowledge is present. Universities and publishers have seen this coming and often require their experts and authors to write blogs and so forth. But the crucial,and arguably more difficult thing, is to achieve a balance between writing the books that will line the library (real or virtual) shelves and the short ideas pieces that fill a blog and inspire conversation and further exploration.

I was lucky enough to be invited to work with the year 1s as they revised and edited the narratives they had written in their literacy workshop. They were funny, exciting and dynamic stories full of adventure, catastrophe and not always (but sometimes) happy endings. At that moment they too were writers, with the power to imagine other places, people and events and to take me, their audience, along for the ride.