The Publisher/Editor Page is here: https://liveencounters.net/mark-ulyseas-publisher-editor-of-live-encounters-magazines/

2011 – Another year of Living Foolishly? – by Mark Ulyseas

This year is grinding to a close and then hope will begin for the New Year. So what will it be? More wars? Genocide? Child abuse? Women beating? Extinction of another species? New insidious revelations that expose the all pervasive criminality of international politics and sections of the Media? There is so much to choose from. It’s like a supermarket out there with all kinds of manmade disasters available on the shelves, one has simply to reach out and grab one.

2011 is ending on a note of negotiated delusions with the climate change conference in Durban. What happened to the good old days when we used a blanket instead of a heater? All this talk of saving the world is pointless. Everything is done half-heartedly. Let’s make a resolution for the New Year to decimate the planet. Destroy all our natural resources, pollute the rivers and farm the seas to extinction. At least we would be doing one thing properly.

For instance, let’s take a quick look at Afghanistan. The British couldn’t control the tribes in the 19th century, the Russians failed miserably and the American soldiers with their assorted comrades in arms, poor souls, are dying by the dozen along with faceless unarmed civilians. I suppose life is cheaper by the dozen. Hasn’t anyone got a clue about what the Afghans want?

And what about certain parts of the Middle East? Do you think they will run out of people considering the number of killings that are taking place? Education there is history – like the death of a six year old killed by a stray bullet. It stems from the barrel of a gun. The pen is for signing death certificates.

Statistics are essential in war zones. They can always be rearranged to suit one’s perceived
objectives. The little numbers represent people; mothers, fathers, sisters, brothers, relatives and friends. A neat way to manage these numbers is to write in pencil so that an eraser can be used judiciously.

And while the death toll in war ravaged countries rise, a hysterical caucus threatens Iran not to go ahead with its nuclear program, while watching China systematically and violently dismantle Tibetan culture.

Africa, the Dark Continent, what can one say about its peoples and their ancient civilizations that have slowly been corrupted by large corporations and foreign governments meddling in the affairs of the states: Buying and selling governments on mammoth proportions? Oh for the days of Idi Amin. Remember Entebbe and the blood baths? Everything is so quiet now, no excitement and drama except for piracy off the coast of Somalia, theft of natural resources and other inconsequential happenings.

What about the sub-continent, India? Do they still abort female foetuses? Burn women who don’t bring enough dowry? Continue to kill tigers for their body parts to be used in aphrodisiacs? And do millions still exist on the threshold of life and death? And is the arrogant Indian Middle Class growing to newer levels self indulgence?

Forgive me, I missed that little country to the west of India; Pakistan. Poor chaps they’ve had such a tiresome year with the constant ebb and flow of political violence and religious fundamentalism peppered with suicide bombers that probably the common folk want to migrate to India… can’t really blame them. All they desire is to live in peace to pray, work and procreate.

Now let’s see who is left on the black board? Hmmm…Chavez seems to be holding forth. And what about the indigenous people of the Amazon who are fighting a losing battle with the powers that be to stop the plunder of their home, the rainforest, the green lung of mother earth? South America appears to be lost in translation. We never seem to get a lot of news from there except for soccer, drug lords and the Mayan Calendar that ends in 2012.

Let’s leave all this violence for some whale steaks. The Japanese are so considerate to the world at large. For a country that prides itself on rejecting nuclear weapons it has a rather odd way of showing its respect for the environment. I am referring to the mass killing of whales for scientific purposes. Actually you must admire their concern. Ever considered the fact that they maybe ridding the oceans of monsters that take up so much space and are a serious health hazard to humanity?

I think Japan’s neighbour China has the right approach. It has dispensed with the cumbersome concept of Human Rights and its implementation. In its place totalitarianism with a small dose of plutocracy has been suitably installed.

There are many countries that lecture China on its Human Rights. Wonder who has a perfect track record? The world’s last Superpower? A superpower that continues to interfere in the affairs of other nations … at times actually sending troops and bombing unarmed civilians along with perceived enemies of the State?

I suppose the term ‘collateral damage’ is more palatable than the word… murder.

Civil liberties are essential for the survival of a nation and so is the health of its people. In some areas of society where common sense has been the victim, Nature has found a way of retaliating by inventing diseases like AIDS and Swine Flu, infecting millions and helping to keep the population in check.

And once again, as we have done in the past, this Christmas and New Year we shall all sit down to sumptuous meals, drink whatever fancies our taste buds, shop till we drop and pamper our overweight children and pets. It’s the season of happiness, love and family especially for the homeless, injured and maimed children of wars, missing women in Afghanistan and elsewhere, asylum seekers, political detainees and the fringe folk of the planet. They will surely be very happy and content with what they see, hear, feel and touch this festive season.

Merry Christmas and a peaceful New Year to all. 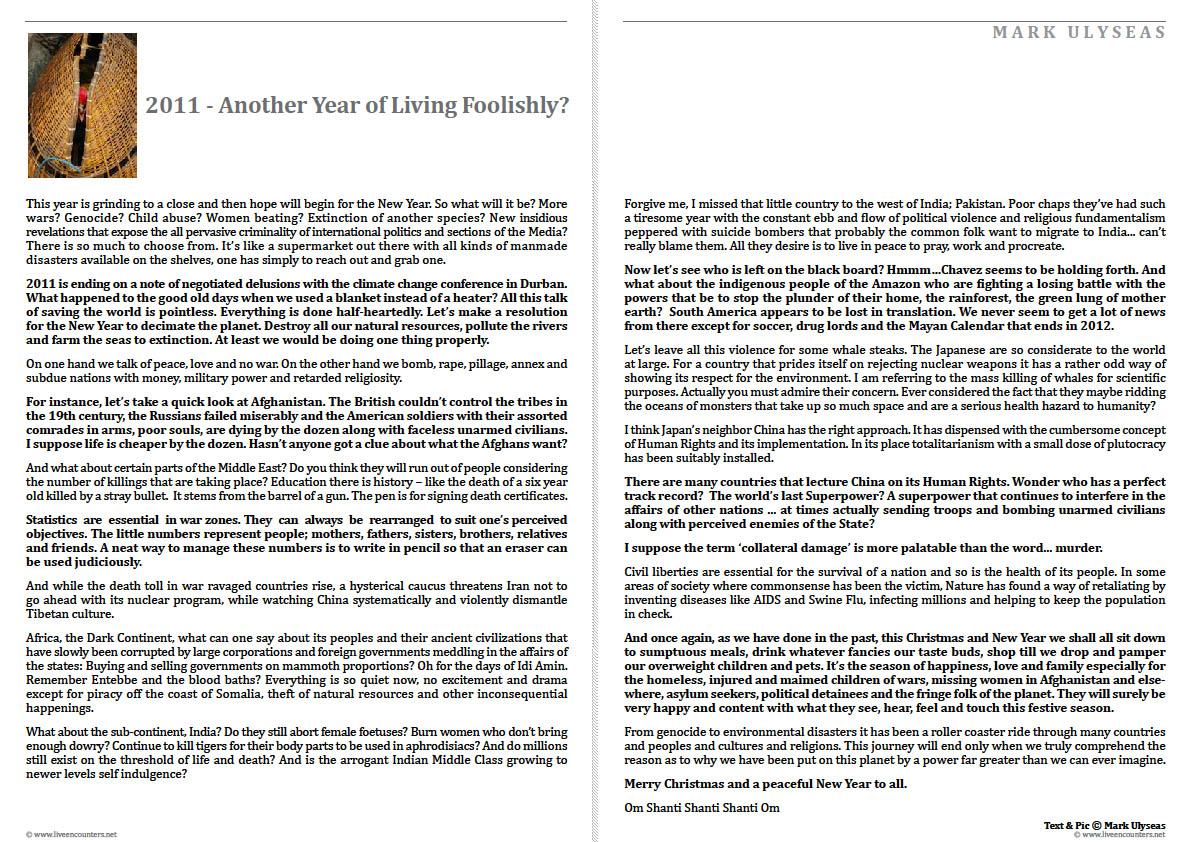