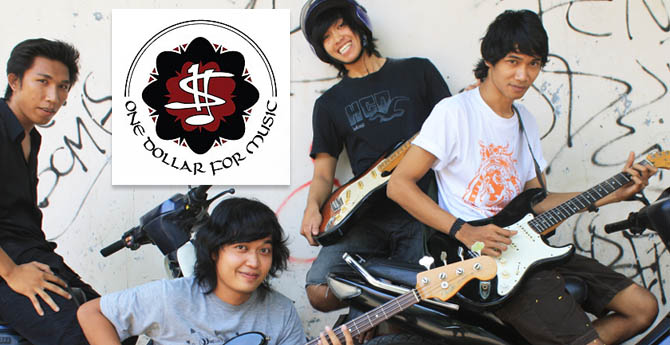 Bali is inundated with Yayasans (charities) ranging from free eye operations, education, recycling to animal shelters. A number of these Yayasans are doing stellar work and have made a positive impact on island life. One such organisation is Onedollarformusic, the brainchild of Raoul Thomas Augustine Maria Wijffels a Dutch national residing in Bali.

When I first came across this organisation I assumed it was another scheme to make money off unsuspecting bleeding hearts with a conscience that continually beseeches them to ‘contribute’ to ‘causes’. However, after meeting Raoul (who has over 20 years experience in music, arts, education and management including working as a teacher and music pedagogue at the Conservatories of Amsterdam, Utrecht and Rotterdam) and his Indonesian counterpart Rudolf Dethu, it became apparent that this is an organisation that has the potential of becoming a major force in the creative and economic development of young potential musicians across the Indonesian archipelago.

What is onedollarformusic?, I asked Raoul

In 2007 I founded this Yayasan because I felt that the hidden and undeveloped musical skills in this country needed such an organisation to nurture it and bring it to maturity through a comprehensive…a holistic approach. But this could only be done by first learning the language, Indonesian, then forming a legal entity so that all operations/accounts could be above board and finally involving the people of this nation…empowering them to seek expression through their compositions, lyrics and rhythms.

One dollar for music is an insignificant amount for most people. However, each dollar adds up…each dollar does make a difference.

Since its inception the Yayasan has been swamped by youngsters with immense talent eager to learn, create, compose, perform and even help with the mundane activities of the organisation.

It has been slow but steady progress though hampered by insufficient funding.

We need all the help we can get at the moment to maintain smooth operations.”­­­

“Does your program help in preservation of the prevailing culture?”

“Music transcends all barriers. It is universal. It doesn’t have a language. And more importantly preservation must have a development value to it. What is going wrong is that we tend to put a fence around culture, to preserve it like a museum…isolating it from being ‘connected to the ebb and flow of life tides’. Free movement of ideas through music by the now generation helps in impregnating and giving birth to new trends and this directly impacts industry and the overall economy of a country,” replied Raoul.

“Then why do so many Indonesian musicians I have met still have a ‘please excuse attitude’ and are not aggressively promoting themselves. There appears to be a latent hesitation that defies logic. Why?”

“I agree there is some truth to your observation. Maybe this is because of the past political situation in the 60s and 70s that resulted in a form of oppressiveness, which infiltrated even the creative community. Things have changed dramatically and this country, Indonesia, is racing ahead to catch up with other nations in all spheres of development…not excluding the indigenous music. That is why our organisation is preparing a base on which these very talented artists can learn, grow and actually make a living from their music. Today we have a fast growing music industry, a free press and most importantly with the advent of (multi-lingual) social networks like Facebook and WordPress, Indonesia has become an integral part of village earth”.

“So what are your future plans?”

“Undiscovered artists that are out there across the nation need to be found and brought into the mainstream. And this can be achieved provided we have the resources to create a composite road show that criss-crosses the islands thereby coming into direct contact with budding musicians who can then be taken under our wing to be professionally trained in various musical instruments and as composers and lyricists. Also, a vacuum exists where an institute of music should be…a centre for professional excellence providing a wide range of courses for young Indonesian talent. All services should be free and supported by Indonesian and international organisations through funding from different agencies. And like art schools this centre can link up with similar institutes across the world thereby exposing local talent to international artists and becoming the gateway to endless possibilities for future development.”

Rudolf, you are the Indonesian Chairman of the Yayasan, what are your views on the work the organisation is doing and is it effective?

As a country we have still to shake off the after effects of the Suharto regime. Yes, I agree things are much better but the psyche of the people still has to ‘open up’ to become more free. Therefore, I see how our young people, the now generation or should I say Jeaneration…still need to come out and express themselves…and what better way than to come to us and be able to develop their creative skills. Onedollarformusic has been instrumental in showcasing many such young people and some have composed, performed and recorded their musical compositions. They could not have done all this without us backing them. But we urgently need a large infusion of funds for the grass roots program that is to be implemented. Write to us and we will inform you how you can be of help.

What has been your contribution to the music scene? And your views of the prevailing market conditions for upcoming bands?

I have been associated with many well-known Indo bands  Navicula, Superman is Dead and Suicidal Sinatra; Radio Oz Bali and other radios stations;  and founder of Musikator – a directory of Indo bands with emphasis on Bali; Scribe for the Beat Magazine and more.

Indo bands are not being protected and often their rights and privileges are non-existent. Our Yayasan must provide a kind of free legal aid to the nascent music industry. We must educate them on how they can seek protection under the IPR and negotiate contracts with recording companies; and more importantly how to prevent their compositions from copyright infringement. I know this sounds crazy because Indonesia is known for its pirated CD/DVDs! But we are growing up and becoming responsible…hahaha.

Did you know that many popular pop Indo songs are being illegally used as ring tones for hand phones? The enormous revenue loss for the relevant bands is mind-boggling. This has to stop as it is killing the music industry. I think this is where Onedollarformusic comes in…we can provide back up in terms of legal aid as well as making representations to government and industry. Also we can play an important role in educating the young people on such matters that in the end affect us all.

Any suggestions on where the funding will come from?

What is more safe than music? It is not trying to make war. It is an artistic form of non-violent expression. Therefore, funding must come from organisations that don’t have an agenda like religious or political. It should not have any strings attached. Of course it goes without saying that our operations and accounts are transparent and open to inspection by the respective donors.

Funding from government and industry will be welcomed provided we are free to carry out our work without interference and/or subjective promotion of unqualified individuals.

But we should not forget the individual who donates the one-dollar. It is these individuals who are the true lovers of music and it their one dollar that has kept us going. Every dollar adds up.

If I drop my tears
I’ll drop them here!