Henry Miller in Bali – A short story by Mark Ulyseas

The day commenced with a downpour that drenched his spirit and kept him closeted within himself as work meetings trailed to sundown and slipped into twilight at the bar. Devils crouching on the rocks in the water of life invaded his senses and occupied his nocturnal thoughts with carnal concoctions.

Loud chatter, clatter of cutlery and the ubiquitous chiming of cell phones created a world of pathological passion that crept into his sinews, prompting him to ask a friend the question,

“Do you have any company to spare tonight?”

After a few whispers into a hand phone, winks, nudges and a camaraderie that bespoke of a reality he had never encountered before, he suddenly found himself sitting in his car with a warm sensual woman  clutching his body like a baby simian suckling one of the troop.

The time they spent in the darkened car park was made up of silhouettes punctuated by unabashed emotional eruptions that loosened the tightly held strings of their lives. She searched him out by tracing her soft hands across the contours of his aging body. The tautness suddenly snapped when he left his imprint on her as they both convulsed into spasms of tingling intimacy. Then they rested in each other’s arms to the sound of their breathing…her breasts rising and falling like a gentle summer breeze. The symphony of sweating, heaving bodies subsided to the croaking sound of mating frogs.

Aroma of cheap perfume and perspiration permeated the air.

“I am looking for a boyfriend”, she said with an air of contentment and hope.

He quickly turned his face away to light a cigar, rolling down the window and blowing plumes of smoke into the night that was being washed by a light drizzle. He never answered her and instead started the car, leisurely driving out of the car park.

“I want some water to drink. I’m thirsty,” she said.

He stopped at a Circle K and bought them water, chocolate ice cream and chips, as if to shrug off the sudden guilt that had descended on his shoulders. She licked the cold bar and munched on its crispy chocolate coating.

“uuummmm…this is nice…sweet but cold. Do you always order out? I mean like me? You know I’m alone. My parents passed away many years ago. My only sibling is my brother who doesn’t bother whether I am alive or dead”.

“We all have our lives to live. We cannot run from ourselves”, he said softly at the same time reaching out with one hand to stroke her like a pet that had just done a trick.

“Yes I know. I work in a Spa. Sometimes I have to do a customer but I don’t mind ‘cause I get enough money to pay rent, buy clothes and enjoy. I don’t know how much to charge you. Actually I accompanied my friend tonight hoping to find aboyfriend. Oh well, maybe another time. Do you have family here? Okay, so how much will you give me?” she asked hesitantly.

He removed $25 from his pocket and placed it in her sweaty palms.

She held it up to the neon light penetrating the car and smiled, “Yes, this is okay, thanks”.

The midnight traffic jam in Kuta, the throbbing music emanating from the restaurants and the effervescent crawlers that thronged the pavements made up the landscape of a Henry Millerish montage; one that would remain briefly in a reality of lascivious surrealism spiced with Sambal (a potent local chili sauce).

A short time later they reached her place that was located on a narrow side street. When the car came to a halt she bent over and kissed him on the lips, running her fingers through his hair and whispering, “Call me when you need someone to love, I’ll be there but only nights”.

Then the door slammed shut and the darkness swallowed up another desperate soul leaving him to drive home alone to the grating whine of Dylan’s ‘’Desolation Row”. 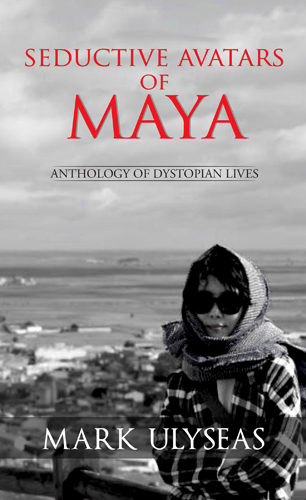